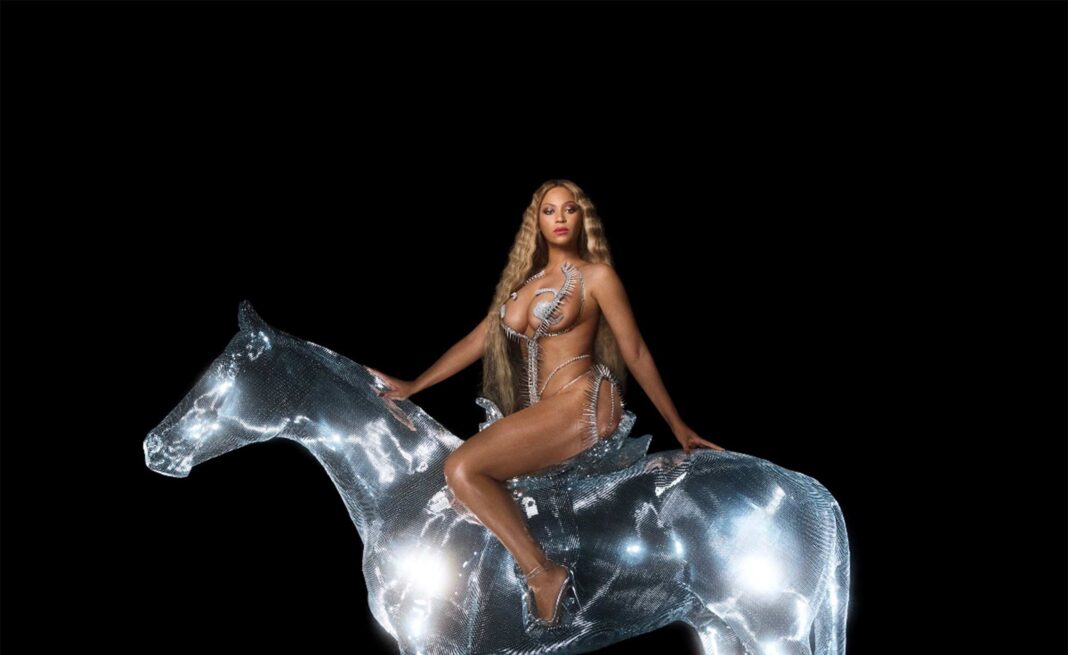 In the uncertain, emotional years of 2020 and 2021, it is no surprise that heartfelt singer-songwriters reigned supreme. Phoebe Bridgers, Sam Fender, HAIM, Olivia Rodrigo and folklore/evermore era Taylor Swift were what our pandemic-strike souls needed, doing dark humour and guitar-based emotional sincerity better than anybody else. But when you think of 2022’s biggest music trends, things felt a bit more sonically upbeat, the long-awaited release party from lockdown and governmental distancing rules.

If The Weeknd’s ‘Dawn FM’ was the intoxicating warm-up (and Drake’s ’Honesty Nevermind’ the half-hearted interlude), then Beyoncé’s ‘Renaissance’ declared house the official mainstream genre of the year. Arriving at the peak of the summer, it ignited hearts and minds with its loving celebration of black LGBTQIA+ nightlife and club culture. Directly or not, it set a tone for the year where vibes were the priority; no worrying about jobs or societal pressures, just embracing the joy of being alive. Insightful lyrics were a bonus, but it felt good enough to just move, to be at one with a strong beat. With this in mind, many of the years most talked about new artists were in some way champions of dance, house or D&B: Nia Archives, Eliza Rose, Charlotte Adigery & Bolis Pupul, Confidence Man, Fred Again, Shygirl, even Bad Boy Chiller Crew.

The uptick in mainstream enthusiasm for dance music was hardly surprising given its societal context. With many countries broadly ruling that the worst of the COVID-19 pandemic is over, people wanted to get out and about again, to feel the collective thrill of a roomful of bodies moving as one. However, other albums and singles focused more on ‘house’ as a feeling rather than a musical genre, displaying intricate relationships with feelings of safety, belonging and cultural reflection. Harry Styles made a whole album of it with ‘Harry’s House’, as did Beabadoobee with ‘beatopia’, named in tribute to the imaginary world she created as a schoolkid. Jack Harlow felt guilty about the pressures of growing fame on ‘Come Home, The Kids Miss You’, as did Fontaines D.C. with ‘Skinty Fia’, paying tribute to Ireland while also wondering if it was wrong to spend so much time away from it.

While Big Joanie used lo-fi nostalgic rock to explore their longing for ‘Back Home’, Taylor Swift celebrated the ways in which both mind and bedroom can feel oppressive, reliving 13 sleepless nights on ‘Midnights’. Providing a more existential take, Warpaint and The Big Moon offered nuanced perspectives on motherhood and fresh starts, reflecting on the ways in which home-based responsibilities and personal identity can mingle and stretch with new love and time. Paramore, meanwhile, were concerned about what leaving the house might bring; on comeback single ‘This Is Why’, they actively lurked behind the curtains, fearing the glut of fake news and cultural division that lives outside.

For the introverts, home also meant exploring boundaries and making cultural critique about the surroundings in which we’re expected to thrive. Wet Leg and Willow both rolled their eyes at committing to disagreeable plans (“The ambience was overrated at the party/I want to run away before it’s even started” goes the former’s song, ‘Angelica’), while FLO kicked out a cheating partner, leaving his belongings in a cardboard box to collect. While Yard Act were pondering financial (dis)affordability and capitalist structures with ‘The Overload’, The 1975 went as far as to build a physical home for themselves onstage for ‘Being Funny In A Foreign Language’, using it as a vessel to explore sensations both pure (“I’m in love with you”) and horny alpha-masc (snogging fans onstage, tearing into raw meat, grabbing penic etc.). Even some of the best album artwork of the year reflected feelings of domesticity; the hairs in the soap of Dry Cleaning’s ‘Stumpwork’, Kojey Radical levitating over his own city on ‘Reasons To Smile’, Ethel Cain’s rural, maudlin ‘American Teenager’ bedroom or the haunted house that covered Holly Humberstone’s ‘Can You Afford To Lose Me?’

Of course, not every great album from 2022 fits neatly into this ‘house’ allegory. You could just as easily make the same claim for vehicles; Loyle Carner parallel-parked his way into a powerful exploration of mixed-race identity on ‘hugo’, while Charli XCX made good on her long-promised threat to crash her car into a bridge, demonstrating her ability to go mainstream without compromising too strongly on the characteristic quirks of her sound. Of course, Arctic Monkeys went even more literal, using ‘The Car’ as a metaphor for romantic endings and cinematic ambiguity, continuing their adventure into lounge-band auteurs. Elsewhere, numerous musicians proved that detaching yourself from the realms of space and time could produce equally captivating results; Nova Twins, Rosalîa, Jockstrap and The Orielles all hinted at intergalactic futures, while Sorry begged to travel ‘Anywhere But Here’, delivering one of the only convincing albums of evidence for the much-promised-but-not-really-delivered ‘indie sleaze’ revival.

So, if 2022 did indeed belong to house and home, what might 2023 hold? Great songwriters will always tend to look inwards, but as more and more of us reconcile with the impacts of climate change and cost-of-living, there is every chance that more music will root itself in the simple pleasures of the outdoors, or else find ways to directly criticise the capitalist structures that serve to ruin both the planet and genuine creativity. The sighs are already there; it was a late entry for 2022, but Little Simz’s album ‘No Thank You’ is her most lyrically direct work yet, actively breaking down the fourth wall between herself and industry execs: “Why did I give you the keys to authorise shit on my behalf?”. Given how many more artists have been openly talking about mental health, finances and touring pressures on social media in 2022, it is distinctly possible that these frustrations will bleed into songwriting, adding new dimensionality and frankness to the way in which we relate to artists as people.

In perpetual pursuit of a ‘new’ sound, genre fusion is showing no signs of slowing. With new releases due from Paramore, Olivia Rodrigo and Måneskin due in 2023, the pop-rock revival is still in fine voice, but R&B dominance is also likely afoot, with acts like FLO, Bellah and Tendai high on ones-to-watch lists. With the successful Lovers & Friends and When We Were Young Festivals, Live Nation proved that nostalgia reigns king amongst millennials and Gen Z alike, tapping into our seemingly heightened appetites for noughties sounds. If you can cross-pollinate genres, audiences and future-nostalgia – like SZA – chances are you’re going to be a huge star in 2023. But I also predict that lyrically, more artists may take on the idea of character-driven songwriting, telling stories that transcend a particular moment. A way to explore perspectives outside of one’s own lived experience, or just to conjur up a particular TikTok-worthy image, I’m expecting many more ‘story songs’ like Sam Smith and Kim Petras’ anti-domesticity anthem ‘Unholy’, or full albums that take on a particular tongue-in-cheek persona or alter ego, creating for much richer, multi-media promotional campaigns akin to the scale and ambition of K-Pop.

Speaking of ‘Unholy’, 2023 should also hopefully bring more vocal championing of openly queer and LGBTQ+ identifying artists. While Harry Styles has been praised for years for his open-minded gender expression and his (admittedly very important) allyship at concerts, there is also plenty of room for more artists who wear their non-confirming identities more plainly. The 2022 success of Cat Burns, an openly bisexual Black woman, feels really promising, as does the breakout success of once-XX member Oliver Sim, whose 2022 debut album ‘Hideous Bastard’ dealt insightfully with his experience of HIV diagnosis and stigma, set to brilliantly paced pop. At a time when transgender hate and anti-LGBT+ conservatism is upsettingly rife, it is more important than ever to protect and celebrate those who share their truths in an often-unwelcome world.

Alongside the music itself, it will also be interesting to see what 2023 brings for fans. While TikTok has arguably increased the levels of stan hysteria and entitlement that audiences may wish to involve themselves in, there are signs that the industry is beginning to fight back, recognising that these practices are not always friendly or safe. Just this week, Banquet Records put Louis Tomlinson’s overnight campers at the back of the queue to prove their point about venue’s duty of care, while Ticketmaster mismanagement has caused huge dissent in Taylor Swift and Bad Bunny fandoms. The music we have loved this year may sing about house and home, but it seems that fans are increasingly desperate to get out of theirs, to embrace live music without being required to part with the equivalent of a month’s rent. How possible this will be in a continuing cost-of-living crisis remains to be seen, but one thing is for sure; if great music is a sign of the times, both us and our musical faves are about to wade into very interesting waters, hopefully to a soundtrack of equal intrigue.