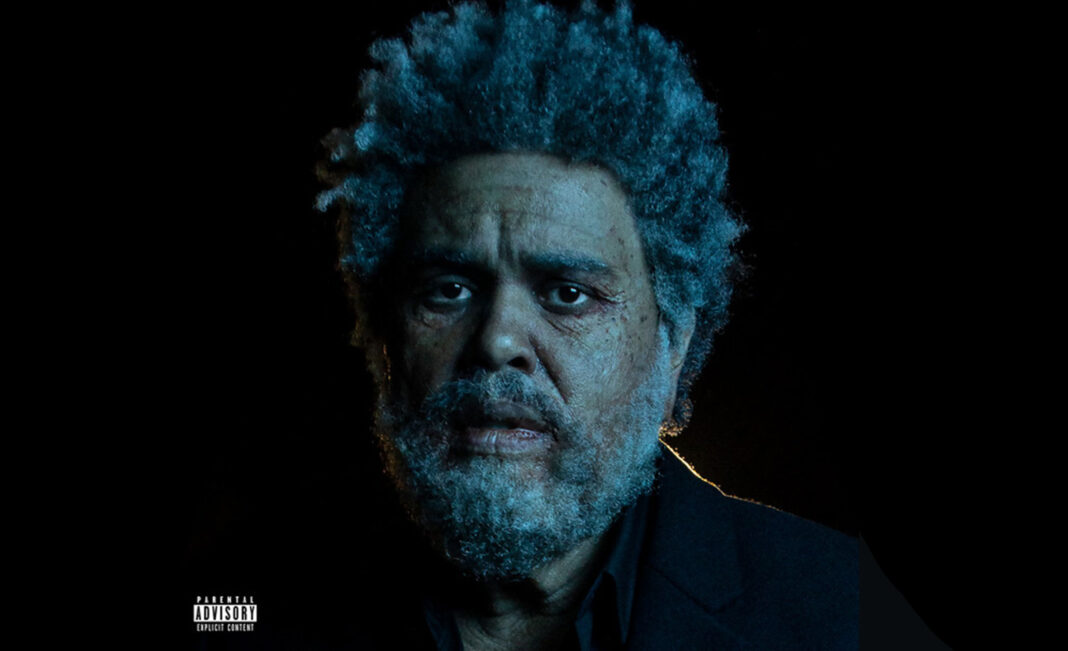 ‘Gasoline’, the first track proper on ‘Dawn FM’ exemplifies this with its interstellar funk energy that sees The Weeknd as the protagonist in this curious sci-fi-esque drama. This follows on nicely into the OPN, Martin and Swedish House Mafia co-written and co-produced ‘How Do I Make You Love Me?’ which screams Depeche Mode with its bubbling synth and falsetto vocal pitch.

Jim Carrey, the unexpected narrator of this journey through various skits, takes on the role of suave radio DJ, welcoming listeners to The Weeknd’s world in the album’s introduction: “You are now listening to 103.5 Dawn FM, You’ve been in the dark for way too long, It’s time to walk into the light, And accept your fate with open arms”. It’s out with the old and in with the surreal, otherworldly new while taking cues and using tropes from an era defined by glitzy synth and jangly discotheque vibes.

With songs like the previously released ‘Take My Breath’ and effervescent ‘Sacrifice’, the first half of the album feels a lot stronger than its second half, mellowing out after the lovelorn ‘Out of Time’. ‘Take My Breath’ is addictive in its pumping groove and Moroder-esque synths, taking The Weeknd into slightly darker territory: “Take my breath away / And make it last forever, babe”. Despite the more sinister undertones, it’s impossible not to move in time to the track’s sparkling melody and punctuated beat.

As well as Carrey’s voiceover, we get another spoken-word interlude in the album, this time from Quincy Jones who speaks about the trials of childhood trauma and familial disruption over an R&B soundscape. ”Looking back is a bitch, isn’t it”? Jones says at the end, drawing out one of the album’s central themes of introspection and the idea of shedding your past.

‘Here We Go…Again’, meanwhile, is a sweet slow jam, with background vocals from Beach Boys’ Bruce Johnston and Christian Love (son of Mike Love). Tyler, the Creator contributes a verse but the real highlight of the song is The Weeknd’s impeccable vocals, which overall in this album sound stronger and more full of fire than ever before. We hear this on the gentle ‘Is There Someone Else?’ and ‘I Heard You’re Married’, the latter including a Calvin Harris credit and an unexpected but pretty enjoyable Lil Wayne feature.

While the second half may not be as strong, one major focal point of the album comes at the end, in the MIDI-tastic ‘Less Than Zero’. If ‘Dawn FM’ was an 80s high school rom-com, this song would be playing on prom night. Its hook is undeniably catchy with fairly melancholic lyrics under the deceptively peppy soundtrack: “Now you’d rather leave me / Than to watch me die in your arms”.

It seems fitting that ‘Dawn FM’ opens with sounds that summon up images of sunrises and tranquil surroundings. It represents the literal dawning of a new era for The Weeknd, one that places him even further along the path to pop superstardom. But it’s also a signal to us COVID-era listeners to remain optimistic for that light at the end of the dark tunnel that has been the past two years. Through 16 tracks, we’re led through a sense of escapism that at times borders on existential dread as The Weeknd gently guides us along his surrealist vision of a pop-engulfed afterlife. By the end, when Jim Carrey returns for his spoken word coda, we’re fully immersed in this enchanting and somewhat comforting plain. “God knows life is chaos, but He made one thing true,” Carrey recites. “You gotta unwind your mind, train your soul to align / And dance ’til you find that divine boogaloo.”