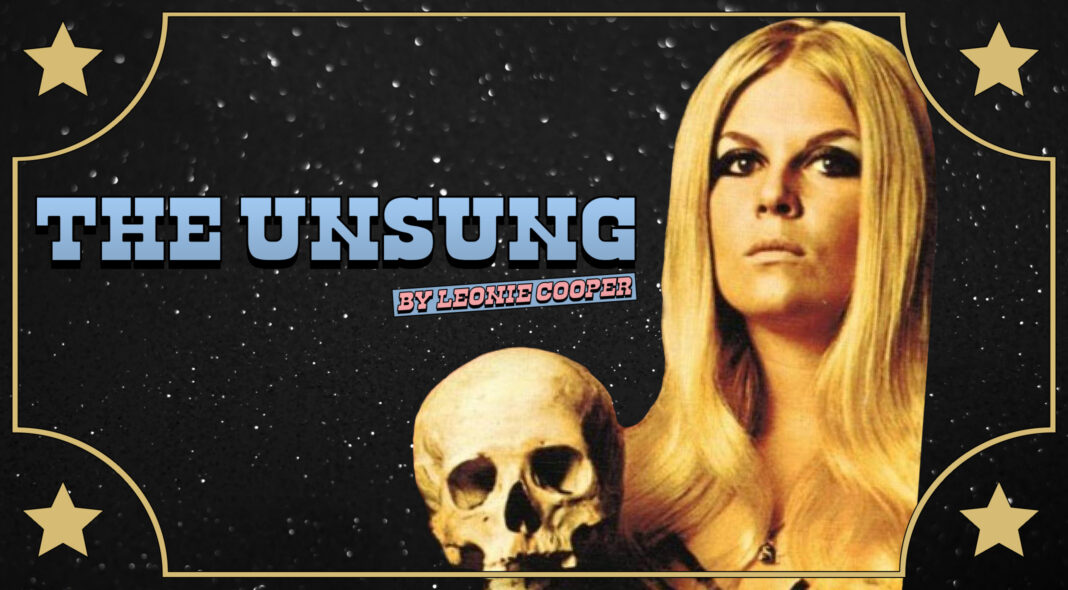 You think Ozzy Osbourne and Black Sabbath invented Satan-summoning occult rock? Think again. A year before Black Sabbath’s doomy debut came Coven’s ‘Witchcraft Destroys Minds & Reaps Souls’, a deeply controversial 1969 release, not least because of its naked sacrificial centrefold – think Playboy but with Aleister Crowley stepping in for a gothic guest edit – and instructions on how to hold a black mass.

At the centre of the storm was the 19-year-old, operatically-trained Jinx Dawson, the Chicago-based band’s high priestess who as well as singing groovily ghoulish songs with names like ‘Choke, Thirst, Die’, ‘Dignitaries of Hell’ and – our personal fave – ‘For Unlawful Carnal Knowledge’, could be found draped nude across an altar on the inside cover.

Like Jefferson Airplane had they crossed over to the dark side, Coven’s brand of psychedelic acid rock was held together by Jinx’s mighty wail, but perhaps her greatest contribution to the history of rock’n’roll was the invention of the devil horns, which Jinx has staked claim to inventing as far back in 1966. In fact, when it was rumoured that KISS’s Gene Simmons was looking to trademark the gesture a few years ago, Jinx – who is still working under the Coven name, with gigs in Europe set for later this year as well as plans for a new album – released a rightly hacked off statement. “I never trademarked MY sign because it was meant for all to do,” she wrote, before threatening to counter-sue.

Though more acid-psych prog than heavy metal, ‘Witchcraft Destroys Minds & Reaps Souls’ was a decidedly bold debut, not least due to the intense 13 minute ‘Satanic Mass’, which sees the band engage in a full occult ceremony, complete with ringing bells, Beelzebub-praising hymnals and crucifix-smashing sound effects while Jinx pledges to commit her life to Lucifer. In 1990 Kurt Cobain would reference the track as one of Nirvana’s favourites to listen to while driving from gig to gig.

Yet due to a release which coincided with the Manson Family killings – and an Esquire magazine article which linked the band’s music to the murders – Coven’s label were swept up in Satanic panic and pulled the album from stores across America. In 1971 Jinx had perhaps her closest brush with the bigtime with anti-war song ‘One Tin Soldier’, which featured as the theme to alt-western movie Billy Jack, scoring a Top 40 US hit in the process. The final release from the classic Coven line-up would come in 1974, with the rather less macabre ‘Blood on The Snow’.

Jinx’s fascination with the dark side was far from a PR stunt. In a 2019 interview with Metal Hammer, she coolly traced her interest back to a mystical family line. “I had always been involved in the family Magick since I was a child, and it had always stormed around me like a warm friend,” she said. “I grew up quickly around the Olde Ones – my two great aunts who were Left Hand Path adepts. I stayed and learned at their mansion as much as I was allowed. I soaked it all up and it became a passion. Their Magick was infectious and powerful.”

Well over 50 years from her debut and Jinx is as passionate as ever about witchcraft, now using her mystical energy in the most modern of predicaments. “Got in a confrontation with a big unmasked guy in a store check out line tonight,” wrote Jinx on Twitter recently. “Started berating him, he tried to ignore me. When I called him a pussy he turned & started to come at me. I started spewing curses in Latin. He backed off & left…ha.” Now if that isn’t using your powers for good, we don’t know what is.