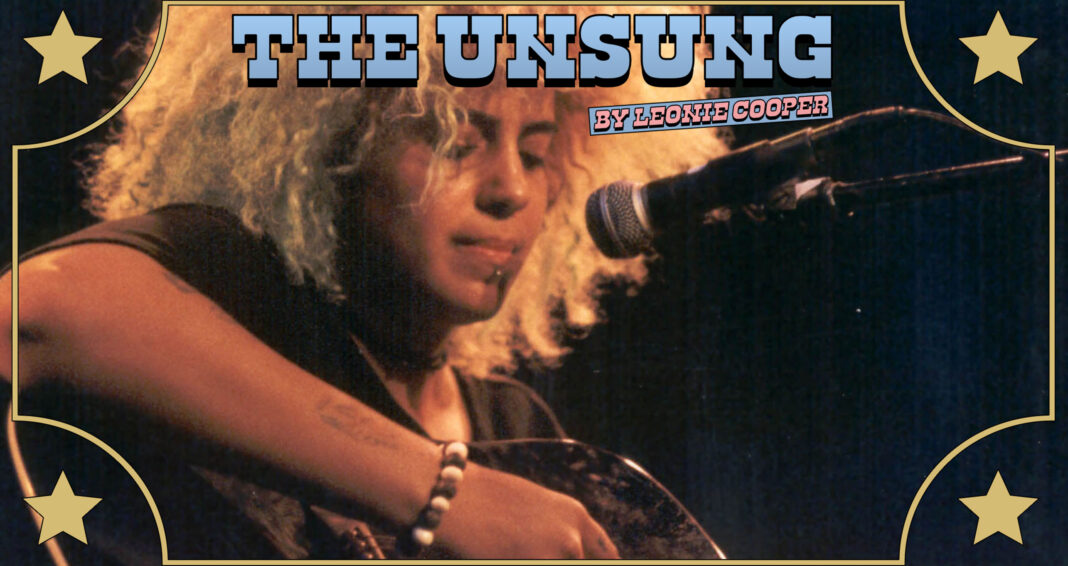 The frantic swirl of 2001’s Strokes-led New York renaissance brought many things to UK-based indie kids, including but not limited to; a proliferation of actually-quite-painful Converse, musty secondhand shop leather jackets and some pretty intense Velvet Underground related sessions on Napster. Manhattan’s antifolk movement was also scooped up in its wake – a wry but loveable acoustic movement based around an East Village venue called the Sidewalk Cafe.

Paying both loving tribute to and sneering sweetly at the stoic Greenwich Village scene of the 1960s, antifolk’s leading lights were celebrated on a scrappy compilation called ‘Antifolk Vol. 1’. Released on Rough Trade, I got my copy at the label’s Covent Garden shop, the one underneath Slam City Skates, both minefields full of people far cooler than me. Terrifying. Safely back in my bedroom, it was love at the first listen, the CD full of ragged songs that bounced between stand-up comedy and deep, dark expositions of the soul. Kimya Dawson’s lusciously lofi lullaby ‘I’m Fine’ was a little bit of both, complete with nonsense lyrics that every so often made total sense. “Embossed and frosted and toasted and tanned/With your cock on my sleeve, my heart in your hand,” sang Kimya softly, a ballad that was still awfully sweet despite its forays into the X-rated.

It was Kimya Dawson who compiled the record, alongside trusty sidekick Adam Green. The previous year the pair had finally released their first album as The Moldy Peaches after making music together since the mid-1990s, first meeting at a children’s open mic event when Adam was 13 and Kimya was 20. A selection of songs from previous EPs, its endearing mesh of gross-out lyrics and tender melodies – a stupidly fun, DIY punk thrasher about smoking crack, anyone? – proved a surprise hit. Kitty Empire’s glowing NME album review praised the duo for “spending quality time in the gutter, ignoring the stars”.

Often referred to as Adam’s former babysitter, Kimya’s parents ran a day-care centre for kids at their home in Bedford Hills, New York, where a teenage Kimya’s exuberant spirit was also fostered, powering a playfulness which came out not just in their songwriting, but in the fancy dress outfits Kimya and Adam would perform in and the hair that was blue one day and red the next. “I’ve always been around a lot of kids my whole life, so I think it helps to not let go of that aspect of your being,” explained Kimya in a 2005 interview.

The Moldy Peaches wouldn’t last long after their big break, the band quietly dissolving in 2004, after the release of Kimya’s debut solo record, ‘I’m Sorry That Sometimes I’m Mean’. It was to be the first of many, with incisive lyrics that touched upon weighty subjects like self-harm and assault with as much care as her kids album, ‘Alphabutt’, which dealt with sunbeams, wiggly teeth and monster babies. Protest has always run alongside Kimya’s music, from touring with #SchoolsNotPrisons to writing the potent ‘At The Seams’ about the Black Lives Matter movement as well as the recent ‘Thunder Rolls’, about disability rights and accessibility. “For me activism goes hand in hand with taking care of the kids and the marginalized people that need extra support,” said Kimya to The kNOw Youth Media. “One of the ways to do that is to share our platform.”

Turning 50 in 2022, Kimya Dawson’s legacy is undeniable. Princess Nokia recently professed her love, calling the songwriter “my absolute hero” and inviting them to one of her gigs in Seattle, where Kimya now lives. “In the middle of the show I spotted her on the balcony out of the corner of my eye, so I stopped the entire thing and I dedicated it to her,” said Princess Nokia. “I spoke about her and then sang an acoustic version of her song Tire Swing. I was crying and so was she. It was one of the most beautiful music moments of my life.”​​

The Moldy Peaches: Origin Story – a record of early recordings and demos – is out February 25, 2022.