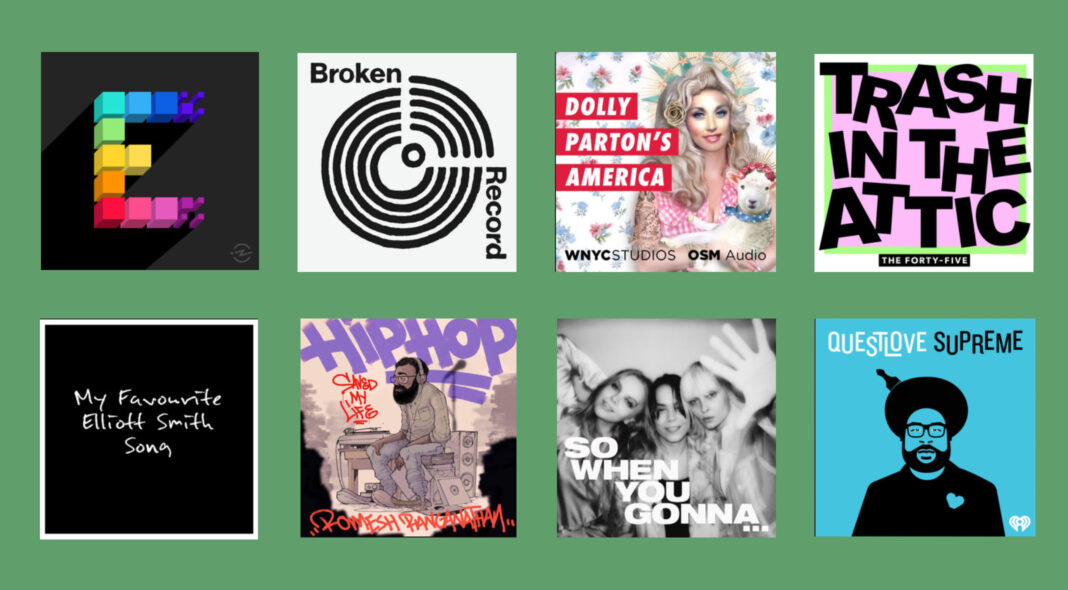 All around the world, COVID-19 has played havoc with people’s sleep patterns. But do you know what’s good for soothing you back off to sleep when you wake up at 4am wondering how the government can possibly be this incompetent and whether you’ll ever get to see the people you love again? Well, dear reader, we can wholeheartedly recommend a podcast.

As our thing here at The Forty-Five is music, here’s a round-up of the best music podcasts out there to help you pass the long days of 2020 or just to help you nod off.

Trash In The Attic

The Forty-Five’s very own podcast. Musicians have a rummage through their loft to find some of their most prized possessions. Charlie Gunn hears the stories behind these lost items.

Don’t have Spotify? Listen on Apple or Acast

Take a deep dive into the making of a masterpiece. The Dissect podcast analyses records in forensic detail, focusing on a different song each week.

Standout episode: Any of the Lemonade series.

James Acaster is convinced that 2016 is the greatest ever year for music and he’s here to convince a new guest of that fact every week.

Standout episode: We’re only a few episodes in but Romesh Ranganathan uncovering the brilliance of Beyoncé’s ‘Lemonade’ for the first time is well worth a listen.

With imagined tellings of music’s most notorious crimes and scandals, Disgraceland takes you back to the moments that made the famous, infamous.

Standout episode: A retelling of some of Little Richard’s wildest moments.

Journalist Malcolm Gladwell and producer, Rick Rubin have joined forces to create this podcast which is essentially a lot of great chats with interesting musicians like Linda Perry, Tyler The Creator and Questlove.

Standout episode: Rick Rubin going deep with Andre 3000 on self-doubt, fame and ‘The Love Below’.

From Loud & Quiet magazine, Midnight Chats is based on the premise that the best conversations happen late at night. Check out their series of interviews from indie’s finest including Tame Impala, Haim and Julia Jacklin.

Standout episode: So many great eps to choose from but this one with Karen O is a highlight (because frankly, who doesn’t want to listen to Karen O.)

Tekashi 69 is one of rap’s most controversial characters. From building a following on Vine and relentlessly trolling his peers, to his recent arrest (and release) following his testimony against fellow gang members this Complex podcast details Daniel Hernandez’ journey from kid in Brooklyn to the notorious face-tatted snitch we know today.

Standout episode: This one needs starting from the beginning to really understand 69’s journey.

So When You Gonna

Dream Wife’s podcast series – released in the run up to their second album of the same name – speaks to a different woman in the music industry each week about their experiences.

Standout episode: Dream Wife frontperson, Rakel Mjoll, in conversation with Marta Salgoni, award-winning record producer and one of only 3% of women in the profession.

Questlove, frontman of The Roots, Jimmy Fallon’s in-house band on The Tonight Show goes deep with different musical guests each week for this conversational music podcast.

Standout episode: Solange on unconscious bias, everyday racism, the relationship with her father and making her record ‘A Seat At The Table’ feels particularly pertinent right now.

Comedian Romesh Ranganathan is a hip-hop head. He interviews guests about the importance of hip-hop to them.

Standout episode: We loved this podcast episode with the brilliant, Sampa The Great.

If you like to nerd out on songs you love, breaking down every beat, every lyric and every riff then this is the music podcast for you. The deepest of dives into a really interesting range of songs. Hosted by Hrishikesh Hirway.

Dolly is more than a national treasure, she’s almost a religion. Delve into the Dollyverse in this eleven-part series that look at every aspect of Dolly’s career, including interviews with the lady herself.

Standout episode: Start at the beginning. The first time you hear Dolly talk is a treat!

Hosted by The New York Times’ Jon Caramanica, every episode explores a current pop culture moment in music with an expert guest.

Standout episode: This episode looks at Doja Cat’s rise to No.1 artist in the US from her early days on Soundcloud and allegations of racism.

Each week a different guest talks in detail about their favourite ever Elliot Smith song.

Standout episode: Phoebe Bridgers on her love for ‘Whatever (Folk Song in C)’. If you know, you know.

The daddy of radio shows, Desert Island Discs shits all over your flimsy podcast concept. The premise is simple: a famous person is asked what records they would take with them to a desert island. Now hosted by Lauren Laverne, the series has run since 1942.

Standout episode: Bob Mortimer speaking candidly about life after major heart surgery, while reliving the music of his youth.