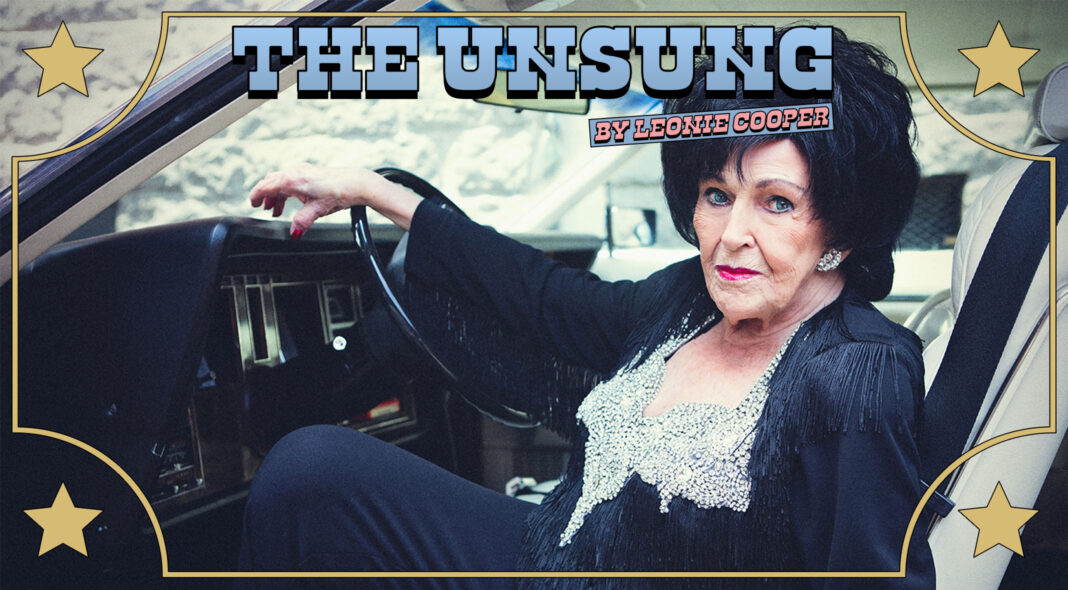 No one – and I mean no one – has ever worn fringe better than Wanda Jackson. The undisputed Queen of Rockabilly, I’ll get to the greatness of her rasping, sleazy and wonderfully rude vocals later on, but first a moment for the outfits, please. Run up by a teenage Wanda’s mum, the singer’s signature spaghetti strap gowns shocked the establishment every bit as much as her one-time boyfriend Elvis Presley’s hip-thrusting dance moves.

Elegant and graceful, yet also downright raunchy, Wanda Jackson’s on-stage looks eschewed the cosy ballgowns of her country contemporaries such as Patsy Cline and the cowgirl co-ords of Kitty Wells and instead cast her as a kind of proto-Pink Lady bad girl. Wanda was all gum-snapping menace and heart-breaking cool. She was the girl by the bike sheds convincing you to bunk off school, smoke menthol cigarettes and possibly invest in a flick knife. In the eyes of the charts, Wanda Jackson was dancing with the devil and even though that sounds pretty fun, not everyone was into it.

Starting out in the country music world, in 1955 a young Wanda was invited to sing at Nashville’s esteemed Grand Ole Opry. But the evening’s host Ernest Tubb took umbrage with her skintight white dress with red fringe, a sweetheart neckline and rhinestone straps. He insisted that she cover up her indecent outfit with a jacket. Wanda did, so that she’d be allowed to sing, but she refused to go back for decades. Instead, she turned on her heels and abandoned the world of country for the nascent sound of rock’n’roll, taking guitar tips from Elvis and letting her distinctive wail and that gritty growl bounce over scratchy guitars and sultry rhythms.

On ‘Funnel Of Love’ she melded the swooning exotica trend of the 1950s with an intoxicatingly sensual approach. Here she didn’t just have a crush, she was hypnotised by horniness, harking back to Bessie Smith’s similarly het-up blues of 1932’s ‘I Want a Little Sugar in My Bowl’. Equally as racy was ‘Fujiyama Mama’, perhaps the only song of the era to conflate sexual tension with the atom bomb. The track didn’t catch on in the US until the rockabilly revival of the 1980s, but not because the lyrics were seen as somewhat insensitive, but rather because here was a teenage girl singing unapologetically about unbridled passion. If America didn’t like it though, that was fine – it topped the charts in Japan for half a year.

‘Fujiyama Mama’ featured on her fabulous ‘Rockin’ With Wanda’ album and over the next few years, she released a handful of records showcasing her unique, trailblazing sound. But the chart-friendly edge of country music pulled her back and she softened up her sound eventually embracing out-and-out gospel in the 1970s as she became more and more religious.

She wouldn’t return to rockabilly until the 1990s, when she returned to the music with which she made her name by playing the hits for pencil dress-wearing pin-up revivalists. As the years went on, famous fans would creep out of the woodwork too. In 2010 Jack White produced her 30th album, ‘The Party Ain’t Over’, with Bob Dylan personally asking her to cover ‘Thunder On The Mountain’ for the record. The following year Justin Townes Earle took the lead for ‘Unfinished Business’.

Following the death of her husband and manager, in 2019 Wanda announced her retirement. After a lifetime of music, it was time to hang up the sparkly gowns. But it wasn’t that easy. During lockdown, Wanda started working with Joan Jett on a new collection of songs. They’re out this month as ‘Encore’ and at 87-years-old, Wanda still swings – and she’s still wearing the hell out of some fringe.