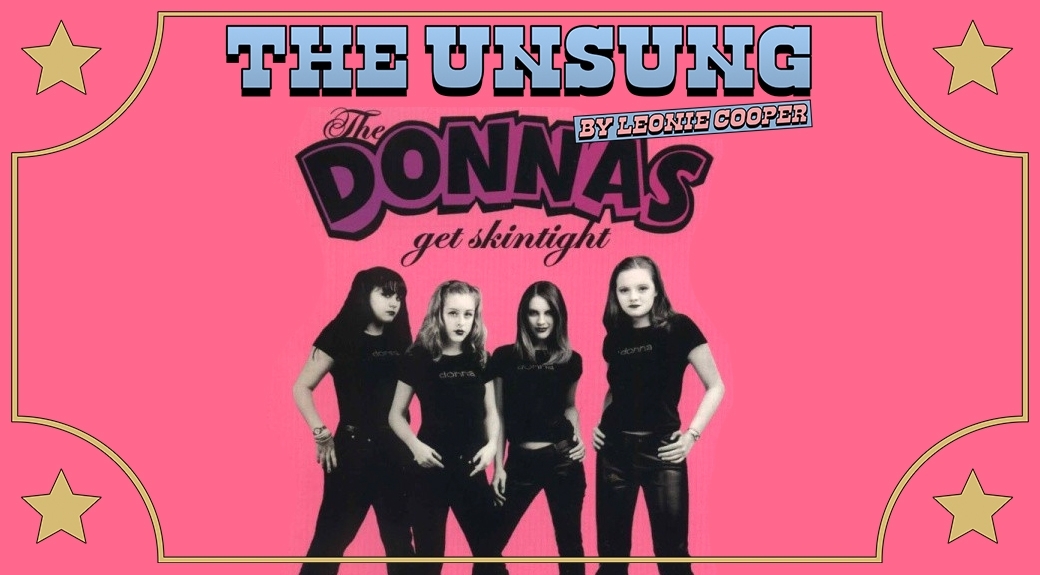 A first for The Unsung, this week’s column features a band that, though no longer still with us, I actually saw play live. I remember the night clearly, down to the shimmery pink, gauzy Miss Selfridge top and the plastic star-shaped bangles I wore as me and my friend Prachi squeezed ourselves into the very middle of the very front row at the Highbury Garage.

Even now, I can’t think of a more perfect formation for a trashy punk band than The Donnas. Four girls from California – crucially not the bright lights of Los Angeles but rather a concrete nowhere town called Palo Alto – like the Ramones before them, The Donnas all took on the same name; Donna A, Donna R, Donna F and Donna C. They had matching gold plate name necklaces, sang about crushes, smoking weed and sneaking out and covered Judas Priest and Motley Crue.

They were a John Waters movie in skintight denim and leather jackets. There was irony and humour in their studied look and simplistic sound, but there was also a love for the suburban Americana which birthed them and the equal parts of boredom and glee that teenage life brings. They were simultaneously the cool girls and the outcasts and I was in love.

Signed to the legendary punk label Lookout! Records – also home to Green Day’s debut album and early EPs – the Donnas released their first, self-titled album in 1997. A high school garage band, their slick and sassy look had not yet been finessed, but the following year’s ‘American Teenage Rock and Roll Machine’ saw their campy vision fully realised. Donna A’s perfectly snotty, nasal whine led the four-piece through 10 songs and 24 minutes of skipping school, partying, gossip and revenge. 1999’s ‘Get Skintight’ was the band’s breakthrough, its neon pink record sleeve emblazoned with their new logo, which saw their name boldly rendered as if they were a gang of cartoon heroes – which, in many ways, they were. Opening with the sound of a jeans zipper, its first track was about nothing more and nothing less than the joys of a good denim before it raced through more teenage celebration and complaints – boys who don’t call, days spent at the shopping mall and telling your parents to get the hell out of your room.

The Donnas’ final album for Lookout! Was 2001’s ‘Turn 21′, a glossier, sparklier effort which saw them digging further into their love of 1980s hair metal, twisting the genre’s misogyny and using it for their own ends, with the brazen ’40 Boys In 40 Nights’ bragging about the endless action they got when they were on the road. On the week it was released Melody Maker ran a competition to win a poster and T-shirt bearing the record’s name. I entered and still own the baby pink shirt that arrived in the post a few weeks later.

2002’s ‘Spend The Night’ saw the band jump to a major label and their slickest – and biggest selling – release yet. Their lyrics still rotated around denim and make-out sessions, but embraced classic rock more than ever. Rolling Stone celebrated their dedication to the cause, writing: “There’s something comforting about this raucous four-girl group’s dependence on the tight, hard riff and its vision of heaven as a 7-Eleven parking lot.”

A couple more albums later and The Donnas retired from releasing records before any of them had even hit 30, forever American Teenage Rock and Roll Machines.