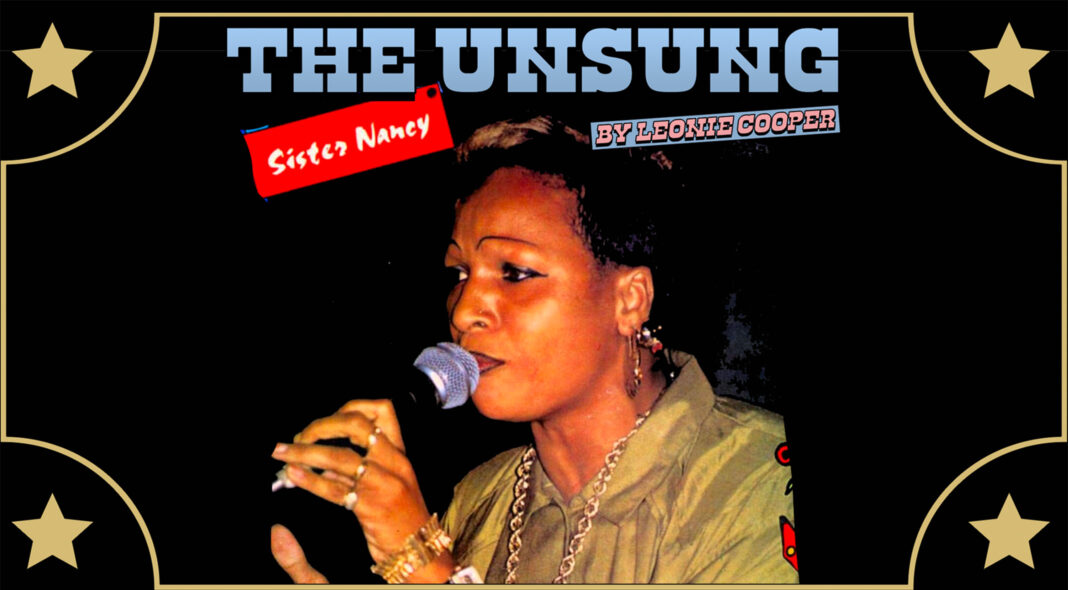 You’ve definitely, absolutely heard Sister Nancy’s ‘Bam Bam’. A huge crossover reggae hit from 1982 that will most likely be played on every single soundsystem over the course of your average Notting Hill Carnival weekend, it’s also been sampled and interpolated by everyone from Kanye West and Jay Z to Lauryn Hill and Lizzo. Your friend who always nicks the aux cord at approx 1:34 am at house parties to play music off their phone is also a big fan, and we can’t blame them. As songs go, it’s one of the very best – a monumental banger inspired by the rather more chilled out 1960s ska tune of the same name by The Maytals, with a fresh-sounding teenage Nancy freestyling over the riddim from Ansel Collins’ 1974 track ‘Stalag 17’. The result is a deeply rhythmic dancefloor anthem, from the opening horns (thanks for those, Ansel) to Nancy’s natural groove, swathed in glorious reverb.

Yet despite its popularity, for years Nancy – the world’s first ever female dancehall MC – didn’t see a penny in royalties. It was only when she moved to the US from Jamaica in the 1990s that she realised that the song had been a global smash after catching it in Hype Williams’ directorial movie debut, Belly, starring the late DMX. She tried to track down her old producer but to no avail. It was only when she heard the song years later in a 2014 Reebok advert that she and her daughter insisted on getting some well overdue financial recompense for her sizeable contribution to pop culture. The pair sought legal advice, and Nancy now owns 50% of the track. “I’m glad I did it, because it’s paying off,” Nancy – who now lives in New Jersey – told The Fader in 2017. “I stopped working two years ago, I was working as a bank accountant for 15 years… Now I just do the road. I just perform. I perform mostly every weekend out of every month. I’m gone and I go everywhere in the world.”

Born Ophlin Russell in St. Andrew, Jamaica, Sister Nancy was one of 15 siblings raised in a deeply religious household to a father who was a revivalist pastor. Something of a rebellious kid, she followed her older brother – the deejay known as Brigadier Jerry – into music in the mid-1970s. Performing with sound systems across Jamaica, Nancy recorded her first single, ‘Papa Dean’, in 1980 with the producer Winston Riley, who had released Ansel Collins’ ‘Stalag 17’ on his Techniques record label.

It was not long after that Nancy would record her one and only album at the legendary Channel One studio in Kingston. ‘One, Two’ showcased her soft, addictive flow, with tracks like ‘Only Woman DJ With Degree’ casually alluding to her status as one of the few female dancehall artists of the era, while ‘Ain’t No Stopping Nancy’ sees her proudly announce the fact that she’s been deejaying since the age of 15.

‘Bam Bam’ was in fact a late addition to the record, recorded after she spent time in studio with the legendary deejay Yellowman, of Zungguzungguguzungguzeng fame – whose riddim Nancy uses on bouncy album track ‘Coward of The Country’. “I freestyled it, I only wrote it down after,” she told NME of the track. “It’s timeless. It’s been 36 years, and ‘Bam Bam’ is still there. It’s not going anywhere.”

Hear Sister Nancy’s influence in the music of:

The Unsung – Annie Anxiety: wonderfully unpredictable since the 70s