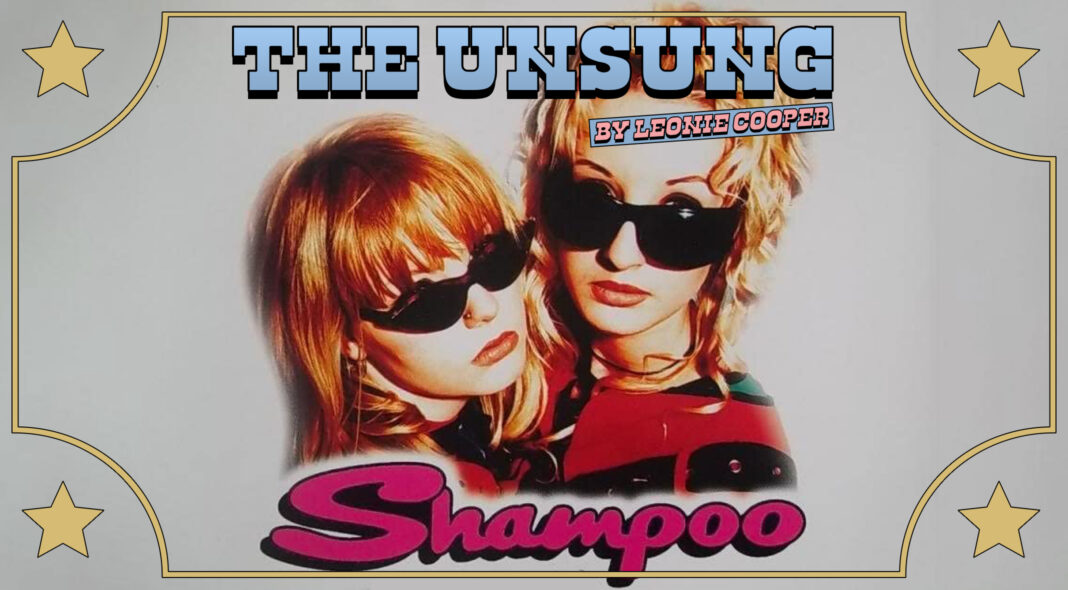 The mid-1990s UK pop landscape was a strange beast. While indie was busy seamlessly merging into the all-dominating force that was Britpop, the fluffier side of the charts was a peculiar jumble of middle-aged rockers like Meatloaf, novelty nonsense courtesy of Mr Blobby, Rednex, Shaggy and Whigfield, and shiny boy bands in the shape of Take That and East 17. In a pre-Spice Girls world, the closest a 10-year-old girl had to an edgy mainstream role model was the gothic madams of Shakespears Sister, who, quite frankly, gave me way more nightmares than that time I saw 2/3rds of The Omen at a sleepover somewhere in Canonbury. The arrival then of Shampoo, two sneering teenagers from South London with a fondness for plastic jewellery and telling boys to piss off, was a game-changer.

Jacqui Blake and Carrie Askew became friends at school in Plumstead, bonding over their love of Manic Street Preachers. They’d club together to write a fanzine about the band called Last Exit and would end up appearing in the video for the 1992 single, replete in fluffy white faux fur jackets.

Looking like a band long before they’d ever actually become one, it made total sense for the duo to start their own musical project. They claimed that Shampoo was so named after their excuse for turning down dates – because they were busy washing their hair, of course. Their debut single arrived in 1993, a clattering punk-pop trio of songs – ‘Blisters and Bruises’ backed by ‘Paydirt’ and ‘I Love Little Pussy’ – which slipped under the radar in the wake of the tougher riot grrrl sounds emanating out of Brighton’s Huggy Bear and London’s Mambo Taxi.

A rethink was needed but a year later Jacqui and Carrie returned with the glossy genius of ‘Trouble’. A perfect pop song, it was a flashy and brash Roy Lichtenstein painting come to life, all primary colours and giddy excitement delivered by two knowing blonde women in immaculate outfits. It landed them a Number 11 chart placement and the pair duly appeared on Top of the Pops, stood in front of a neon sign bearing their bubblegum pink logo. There were no dance routines and no choreographed cutesiness, but rather power stances, indoor sunglasses and ruby red lipstick that looked like a threat rather than a come-on. In fact, Shampoo had more in common with the likes of Liam Gallagher than they did any other girl groups of the era. The timing was perfect; Oasis had made their Top of the Pops debut a couple of weeks earlier and Shampoo’s nonchalant sass was the perfect pop response to Liam’s confrontational approach.

In the summer of 1994, ‘Trouble’ was impossible to escape. When I was let loose in Tammy Girl one memorable afternoon, I was allowed to buy an outfit that I thought made me seem as if I was an auxiliary third member of Shampoo; a pair of tartan trousers and a crop top emblazoned with the words ‘This Bitch Bites Back’ that I’m pretty sure my mum only let me wear around the house. It was enough for me, I was now cool. I got the CD of their debut album, ‘We Are Shampoo’, for my birthday and was delighted to discover that ‘Trouble’ wasn’t their only incredible song. There was a raggedy cover of East 17’s ‘House of Love’, a surprisingly melodic ode to throwing up a kebab in the back of a cab and a banger about Gameboys. A quarter of a century later and I still wish I was in Shampoo. Now, where did I put those tartan trousers…

HEAR SHAMPOO’S INFLUENCE IN THE MUSIC OF: