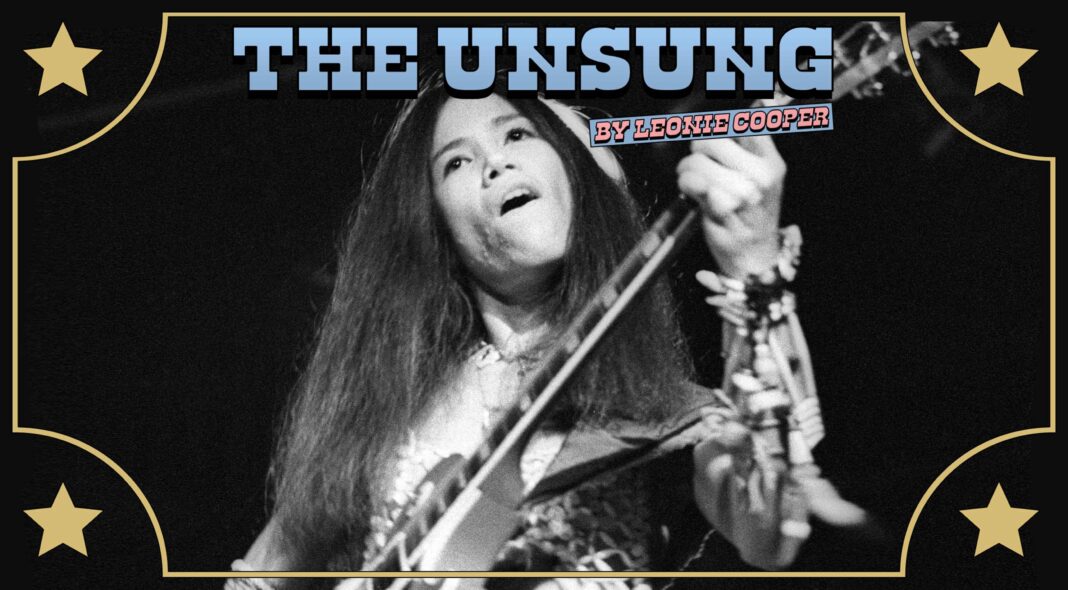 When homegrown guitar hero in the making, Aziya, name-dropped Fanny’s June Millington in a recent interview, it was all we could do not to squawk with glee. 51 years since Fanny’s self-titled debut album and their pioneering classic rock was still making waves amongst a new generation of women who want to do things a little differently.

The first all-female rock band to release an album on a major label, Fanny’s name wasn’t quite as outre as it seems now (in the States fanny means arse rather than the straight-up vagina referencing band names that would follow, cc: The Slits and Hole). It was still a little unconventional though, which makes sense because as a female four piece brandishing electric guitars, Fanny most certainly were.

As the group’s lead guitarist, co-founder and songwriter, all eyes were on June Millington. Born in 1949 to a Filipina mother and American father in Manila, June and her family – including Fanny’s bass player Jean – moved to California when June was 13, the same year that she got her first electric guitar. Just as they had in the Philippines, the sisters were subject to bullying on account of their biracial heritage. At school in Sacramento, the sisters distracted themselves with music, which had an interesting knock-on effect. “People stopped us in the hall,” June told The Guardian of the power of their new hobby. “That was a watershed moment. We didn’t come to this music for ‘sex, drugs and rock ‘n roll.’ It was about making friends.”

Forming a series of bands, as teenagers they decided to make a proper go of things and toured around before finally moving to Los Angeles, calling themselves Wild Honey. It was as Wild Honey that they were signed and after a quick revamp they re-emerged as Fanny, releasing their debut in 1970. A perky and poppy thing on which all members sang, their look and sound was hard-edged hippy; all long swaying hair, lots of denim and folksy but full-on riffs. Vocal harmonies were plentiful and funky, psychedelic flourishes commonplace with June’s twanging guitar solos always given space to shimmer. It was followed by 1971’s ‘Charity Ball’ and the band fast became the toast of rock’n’roll, though were never quite let into the major leagues on account of their sex.

Even so, they were a killer live proposition – they had to be twice as good as they guys to get half the attention. Fellow rock stars were amongst the band’s biggest fans; David Bowie wrote them a letter, they took to the studio as Barbra Striesand’s backing band for a run of releases and would tour with everyone from The Kinks to Procol Harum. In 1999 Bowie was still flying the flag for the then forgotten Fanny, telling Rolling Stone: “One of the most important female bands in American rock has been buried without a trace. And that is Fanny. They were one of the finest fucking rock bands of their time, in about 1973. They were extraordinary: They wrote everything, they played like motherfuckers, they were just colossal and wonderful, and nobody’s ever mentioned them.”

They were funny, too. After being asked to pose nude for Playboy, June’s response – recorded in Creem magazine – was: “We’ll pose nude when Hugh Hefner poses for the centerfold with a hard-on. Let them show Mick Jagger’s cock first or somebody cute.”

June left Fanny in 1974, but never stopped playing music – working regularly with her sister Jean. In her most recent interview, for the LGBT+ publication Bay Area Reporter, June spoke about being queer at a time when few gay women were out. “In Fanny, people think I hid my sexuality – I did not,” she explained. “I just couldn’t speak to it so much then, and besides misogyny was at the tip of our spear, always. You just had to push through, get better – bigger, badder, louder all the time! And I mean that sincerely, that was a damn tough job.” A tough job it might have been, but June Millington did it flawlessly.

Hear June’s influence in the music of: