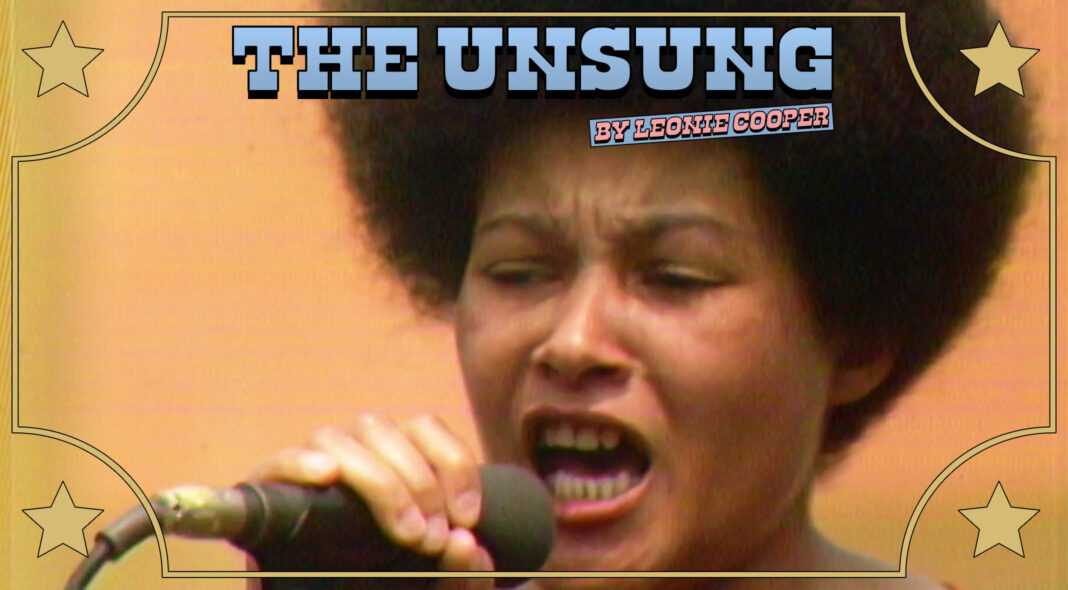 There’s a moment in ‘Summer of Soul’ – a new documentary that details the unfairly forgotten Harlem Cultural Festival of 1969 – in which Sly and the Family Stone take to the stage, unannounced on a hot and sticky New York afternoon. Half the crowd look perplexed by Sylvester’s huge purple sunglasses, by the fact that there’s a female trumpet player amongst their ranks and the group’s rough and ready approach. The other half look absolutely overjoyed. When the trumpet player starts singing, belting out ‘Sing A Simple Song’ in a gruff vocal that’s every bit as intense as her trumpet playing, anyone left wondering what’s going on, simply loses their minds.

Sly and the Family Stone set a rocket under the pop charts of the late 1960s. A multiracial, multi-gendered vision of the future with personalities as big as their songs, their secret weapon was Cynthia Robinson. A founding member of the band, the Sacramento, California-born Cynthia learned flute as a kid, but switched to trumpet in high school, joining the school band in the face of bullying from other kids, who blasted her for playing a ‘man’s’ instrument. “It left me with the impression that, you know, no guy in the world would let a girl play the trumpet in his group,” said Cynthia in a 1995 interview. Yet Cynthia wasn’t discouraged. She studied music at city college and ended up with her own trumpet after finding one on the floor of a friendly beatnik’s house, who said she could have it if she played at his party. “That was the first horn I ever owned. It smelled bad; it had all kinds of green crud inside the tubing, so I took it home, cleaned it, soaked it in hot water, cleaned it all out, and it was mine,” she told Rookie.

As a single mother in her early 20s, she’d been acquaintances with local singer, producer and radio DJ Sly Stone for five years before the two formed the band Sly & the Stoners. It didn’t take long for the group to become Sly and the Family Stone, merging with Sly’s younger brother Freddie’s band Freddie and the Stone Souls and bringing in Cynthia’s cousin Larry Graham to play bass. Despite their drive, the band’s first album, 1967’s ‘A Whole New Thing’ failed to make an impact and so under the direction of music industry supremo Clive Davis the band got to work on writing a sure-fire hit. That song was the irrepressible ‘Dance To The Music’, which baptised the band’s psychedelic soul sound and became a worldwide smash. It was Cynthia who took the track to the next level, her raspy, rowdy voice calling out and insisting everyone join in.

Despite the group’s revolutionary set-up, for Cynthia, it was the music that was always the most important part. “I realised I was a girl playing with all of these great musicians, but race and gender never did cross my mind, really, until other people started talking about them,” she said to Rookie. “They weren’t really an issue for me.”

When Cynthia died in 2015 at the age of 71, Questlove of The Roots – also the director of Summer of Soul – praised Cynthia for her role as ‘the original hypeman’. “But she wasn’t just a screaming cheerleading foil to Sly and Freddie’s gospel vocals,” he wrote on Instagram.