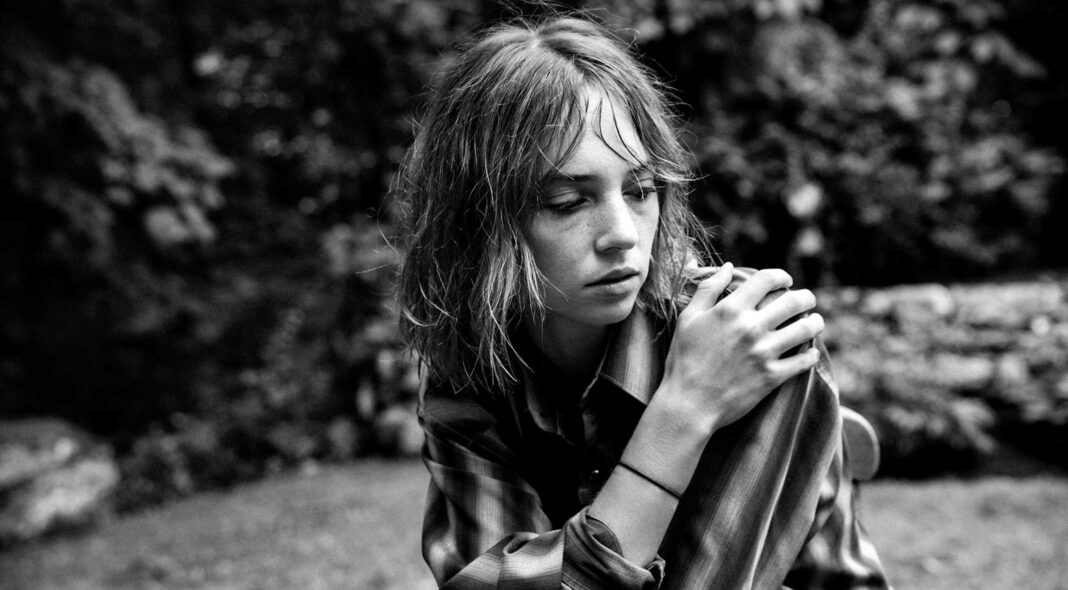 “I ‘ve got sticky little words / They heal and they hurt”, sings Maya Hawke on ‘Sticky Little Words’. The track is from Hawke’s second album, ‘Moss’, itself a spellbinding combination of sticky little words. The 13 album tracks are more poems than songs, vignettes interrogating the experience of being a woman and artist through Hawke’s eyes. A more confident and experimental departure from the folky whimsy of 2020’s ‘Blush’, ‘Moss’ is audacious, introspective and lyrically labyrinthine, radiating curiosity and wonder tempered with a knowing melancholy.

Hawke’s feathery voice dances beautifully over the contours of ‘Moss’, her delivery hushed and intimate – almost like she’s whispering in your ear. Sonically ‘Moss’ is ambient and lush, a rich woven tapestry of indie and folk textures (Hawke’s primary collaborators on the album are indie musicians Christian Lee Hutson and Benjamin Lazar Davis). Mixed at Long Pond Studios, the album seems to carry with it the misty quiet of the famed studio hidden in the haze of upstate New York.

Intertwined in the guitar strings and organ keys is a surprising darkness, a depth of searching vulnerability and unforgiving admission. “I don’t need anyone to hurt me, I can do that myself”, Hawke sings on ‘Luna Moth’ – she accidentally steps on a moth at a lover’s party and spirals into self-hatred and blame. She sings of love with jaded irony on ‘Hiatus’, beginning the song with dizzying tongue-in-cheek infatuation (“I want a gym routine, self-obsessed, hardly dressed teenage dream who cares about sunscreen / And loves to make me Wilhelmina scream ‘cause it sounds like applause”) only to later sing wearily of infidelity and acquiescence (“Maybe he’ll cheat on me, but I’ll forgive him when he does… She was a late shift waitress with a pour heavy / Now your home on hiatus”).

Perhaps no other song captures the prickly essence of ‘Moss’ better than ‘Bloomed into Blue’, a gentle and meandering story of brutality and bloodshed. “As a babbling baby they blessed her”, Hawke sings over a gently falling indie tinker, “her balling mother bled onto the bed boards.” Over darling folk tones and in her signature rasp, Hawke recalls the life of a girl born semi-charmed but all too soon ruined by this world she was born into: “the birds bid for her body”, she is taunted by “whispers of weakling and witch”, and“the blokes” of this world ruthlessly cut her down to nothing. The haunting story (“Bend over, you bedraggled basket babe”, the blokes snarl) is told over innocent nylon strings, chased with the discordant harshness of a fuzz guitar.

‘Moss’ picks up from the thoughtfulness and intrigue of Hawke’s impressive debut and stretches her lyrical and worldbuilding abilities to even darker corners. Far from lighthearted, it speaks to the knottiness and complexity of Hawke’s experiences and relationships, whilst draped in the ethereal soundscape of a fairytale.

Superbloom festival 2022: a diverse debut for the fledgling Munich extravaganza