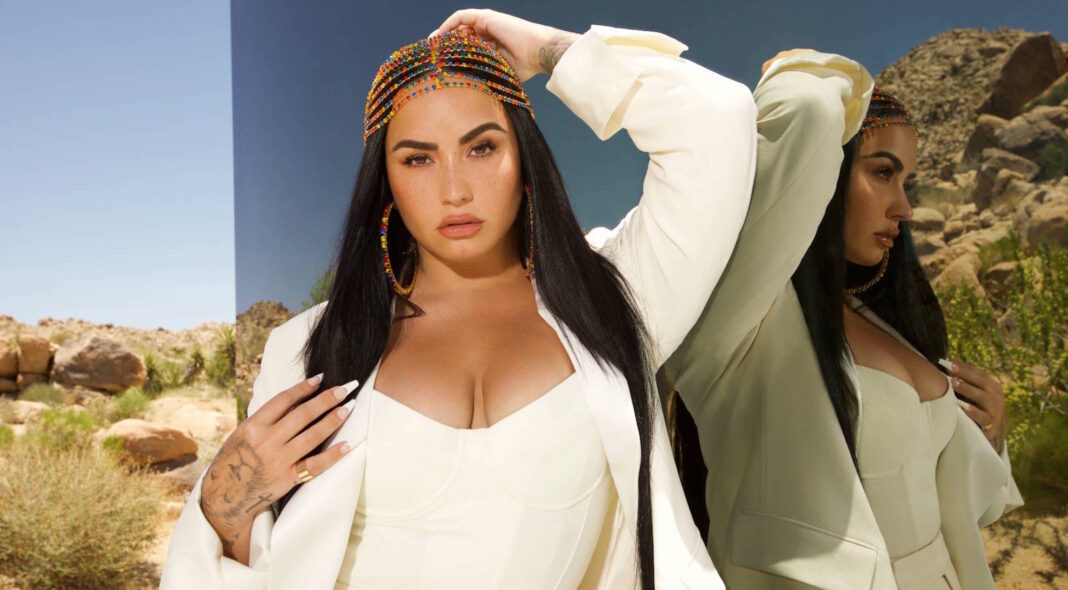 Demi Lovato’s recent documentary ‘Dancing With The Devil’ was no airbrushed tale of narcissistic woe, but a disarmingly candid account. By disclosing the traumatic details of her near-fatal overdose in July 2018, she also indirectly revealed the tough, ugly realities of being a woman in the world – particularly a famous woman in an often-toxic pop music world.

Now, instead of films or newspaper headlines, her openness comes through the songs of the doc’s companion album, ‘Dancing With The Devil … The Art Of Starting Over’. The new record’s determinedly honest approach lends it more sincerity than most of her previous six albums. Still, constructed to appeal to both casual radio listeners and clued-up Lovatics, how the album sounds depends on how much you know about Lovato.

Placed in the pressure-cooker of teen stardom, a normal upbringing was never on Lovato’s cards. But she scarcely had time to grow up at all: aged fifteen, she was raped while working for Disney Channel. Her assaulter faced no consequences. Add in the sexist tabloid culture of the noughties pop era – sex appeal and weight under constant scrutiny, zero recognition of mental health – and her story should come as no surprise.

When your life starts out at such extreme highs and lows, the business of chasing highs becomes a whole new risky ballgame. The album’s opening three tracks document Lovato’s swift tumble from sobriety to overdose: “soon that little white line is a little glass pipe”, she sings on ‘Dancing With The Devil’. From a narrative perspective their inclusion makes some sense. Sonically, though, the album works better without these belted ballads: they don’t match the light-hearted jangly pop that dominates the following sixteen songs, which dip in and out of recovery narrative, past reflection, and future fun.

Emotionally heavy tracks touch on the sexual assault, disordered eating, and industry coercion that has overshadowed Lovato’s entire career – often to moving effect. But ‘Butterfly’ hits the rawest nerve, navigating her complex relationship with her father, who died from an overdose in 2013. “You were always like a bye I wasn’t ready for,” Lovato sings, as she turns his ghost into a positive presence, a source of comfort and an incentive to survive and live her life.

Things can go awry when the lyrics lack nuance. ‘Melon Cake’, a distant cousin of Marina’s ‘Teen Idle’, takes on Lovato’s eating disorder and the management that “tried to make me Barbie-sized, and I obliged”. But it’s the opening of ‘The Way You Don’t Look At Me’ that contains potentially triggering, unnecessary detail (“I’ve lost X pounds in X weeks”).

At other times, the transparency is refreshing. ‘The Kind Of Lover I Am’ clarifies any questions around her sexuality raised by her 2015 hit ‘Cool For The Summer’. And while her lyrics may not always exercise restraint, she reins in her powerhouse lungs, allowing her vocals to glide and soar over piano, electronic beats, and trip-hop effects. ‘15 Minutes’ opens like Wheatus’ ‘Teenage Dirtbag’, harking back to Lovato’s early pop-punk days, a noughties thread picked up by the breezy ‘California Sober’ and the whacking great chorus of ‘Lonely People’. Meanwhile, Ariana’s synth-loaded guest slot ‘Met Him Last Night’ might just be the album’s highlight.

The record is too long —nobody asked for another cover of ‘Mad World’ – but that’s almost inevitable when you’re juggling competent comeback pop with a powerful recovery narrative. ‘Dancing With The Devil … The Art of Starting Over’ is both – just not always at same time. Its soft melodies and catchy hooks sometimes sit at odds with the demons bared, but Lovato’s personality remains intact throughout, a major win in light of her past.

But she’s hidden her addiction behind pledges of recovery before: it’s hard for the girl who cried ‘better!’ to ever appear truly honest. Is this Demi Lovato, or another brilliant disguise? Either way, the new album convinces you to keep rooting for her.