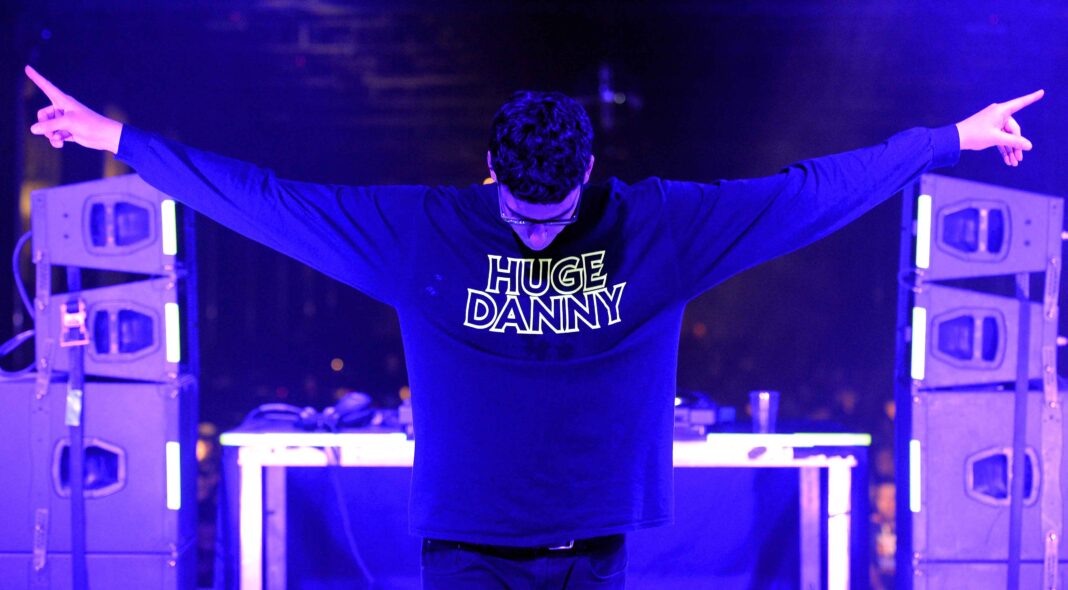 There’s no doubt about it, ‘Harlecore’ is a weapons-grade cocktail of rave subgenres – shaken, stirred and spat out. In true Danny L Harle style, PC Music’s hyperpop overlord is doing the most. After a night staggering through this “immersive digital experience where the rave never ends”, you’ll be left wondering where you are and what your name is. With an internet’s worth of influences, four rooms and three collaborators who take on post-human alter-egos, Danny L Harle’s bop-it-twist-it-pull-it pop is taken to a whole new dimension. With true 2021 optimism, ‘Harlecore’ is a love letter to the sound of it being fucking on.

It would be impressive enough to bring the ethereal club cuts of Caroline Polachek; the gram-of-speed chaos of PC Music ally, Lil Data; and the speaker-bursting bangers of Hudson Mohawke together – but here, we see the trio take on the alter-egos of DJ Ocean, MC Boing and DJ Mayhem. Each represented on the album cover by a mystical jellyfish, a wolf on steroids and a character that looks like the wide-eyed smiley emoji no one uses because of its overbearing intensity, Harle (DJ Danny, here) hasn’t just built an album, or a club, but a new world.

Across these thirteen tracks, you weave in and out of these four, radically different rooms. DJ Danny kicks things off with ‘Where Are You Now’, a track perfect for Dance Dance Revolution at break-neck speed. A nostalgic 80s power-ballad amped up to an almost desperate, kinetic energy, it sets the tone for an album where there is no warm-up. You’re thrown into a world of teeth-clenching trance from the off. Harle’s own tracks, like the gleaming ‘Take My Heart Away’ and the panoramic ‘On A Mountain’, show that even in the world of rave music, he works best in pop parameters. Even in this fantasy of extremes, for Danny L Harle, making pop junk-food is like riding a bike – he never forgets.

DJ Mayhem – Hudson Mohawke – champions pure gabber music, with stomach-in-throat drops and basslines. Even though his contributions are the most sonically punishing, that’s also what makes them the most interesting. ‘Interlocked’ is a stomping, nose-bleed inducing banger dragging you through the dirt one moment, and then lifting you to gleaming, euphoric heights the next. But it’s a hard act to follow, and DJ Mayhem struggles to maintain momentum after blowing all his ammo in the first round. By the time we reach ‘Shining Stars’, there’s very little to tell apart one club room from the next.

There’s a time and a place for MC Boing’s tracks: probably when you’re too off your face to care. But when it’s right the gurning, frenetic minute-and-a-half bursts will seriously go off. Named in a true lolXDrandom fashion, with a comic-sans level of childishness, ‘Car Song’, ‘Piano Song’ and ‘Boing Beat’ are batshit crazy. Rapping at a speed that holds the promise of a headache, until his voice is hoarse, these tracks will make you painfully aware that you’re living in the moment.

Which brings us nicely to DJ Ocean – who, in the daylight, goes by Caroline Polachek. Staggering into her room after the previous sonic assaults, ‘Ocean’s Theme’ washes over you and brings an utter, what-the-fuck-have-I-done sense of stillness. Following in the theatrical suspense of SOPHIE’s ‘Is It Cold In The Water?’, DJ Ocean’s tracks betray the hardcore happy of the other DJs, and instead expose a sense of longing and profound vulnerability. On ‘For So Long’ her words ripple outwards, like you’re gazing up from the ocean floor, and give way to gentle fairy-dusted synths. It’s almost mournful: you wake up, and you realise, with a shattering hangover, that this can’t go on forever. But in Danny L Harle’s imagination – the only dimension where these gleaming, but disparate tracks can exist – of course it can.

READ MORE: The best hyperpop songs of all time