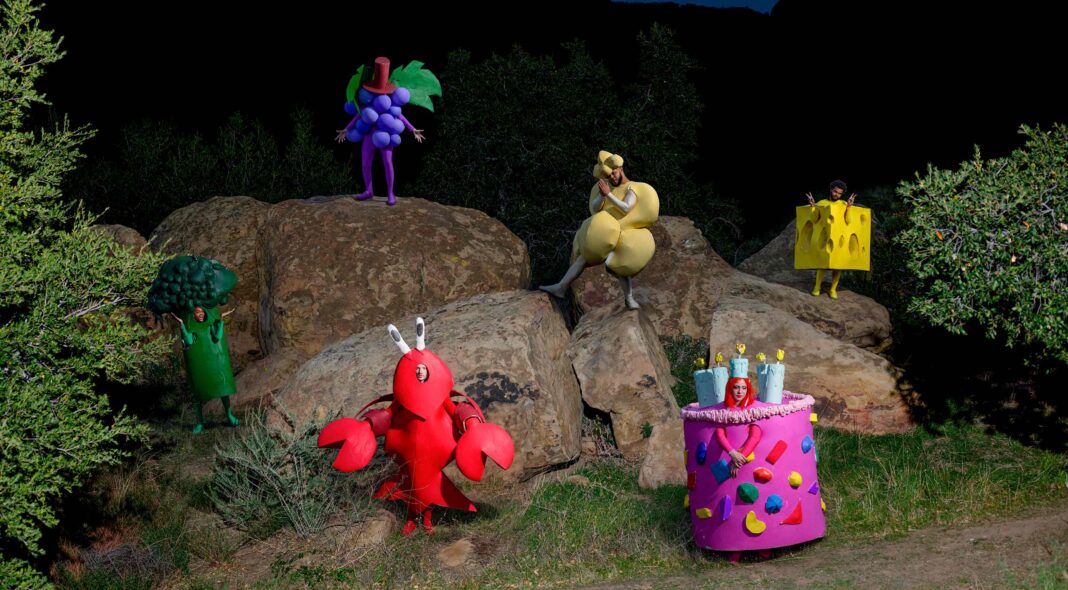 Hyperpop has always been underpinned by the radical idea that nothing actually matters – and no artist embodies that in its totality like Dylan Brady. While he is known best in recent years as one of the two genre-mutilating antichrists in 100 gecs, as well as the architect behind the nastier works of Charli XCX, Injury Reserve and Rico Nasty, the truth is, Brady has been lurking in the SoundCloud trenches for years.

Many fans would be forgiven for drawing a blank when it comes to his latest offshoot record, ‘Cake Pop 2’ – because surely that implies that out there, somewhere, is a ‘Cake Pop 1’. While their Spotify account bears no mention of it, the first Cake Pop release is a 2015 deep cut which predates most – if not all – of the internet-bred hyperpop collectives who have captured the zeitgeist today. Cake Pop was a different iteration of the HELLA collective, a hive of hyperpop pioneers from St Louis which comprised of Ravenna Golden, Aaron Cartier, Louis Grant, Pritty, Robel Ketama, Kevin Bedford and Adam Newcomer. Cake Pop is a space where they can chew pop music into a sugary sludge, throw it at a wall, get it stuck in their hair or jam it through a shredder, and their debut record ‘Cake Pop 2’ only underlines the fact that all of this is fun – and it means absolutely nothing.

‘Black Rum’ was the album’s lead single, and when the music video had Cake Pop dressed looking like they were the tag of a Fruit of The Loom T-shirt, with Dylan Brady dressed as a lobster clapping his lobster pincers together to the beat with expressionless indifference, we knew exactly what ‘Cake Pop 2’ was going to be: spectacularly ridiculous. Over a frazzled synth line that makes you feel like you just jammed your finger into a socket, with a pitch-fried verse from Lewis Grant reeling off gross, comically dark things from ripping scabs off his knees to “healthy helpings of daddy’s drugs”, the track is infectious and dazzlingly empty: a little indulgence when so much of music is a slave to substance and meaning. But ‘Black Rum’ really comes into its own when Ravenna Golden, one of Brady’s criminally underrated long-time collaborators, steps up to the plate. Her voice has undergone aural Botox surgery hopped up on E numbers: it’s a verse that is both slippery and spectacular. But then add a good death growl into the mix for good measure, and after two and a half minutes you feel like you’ve just took a ride in the electric chair halfway to hell (or maybe heaven.)

Now for the bad news: ‘Cake Pop 2’ doesn’t really get any better than this. It feels like a Jackson Pollock canvas spattered with a thousand colours, a thousand legitimately great ideas and sonic territories, but none of them leave you with that same feeling of severe head trauma ‘Black Rum’ gives. The second forerunner, ‘Satin Bedsheets’ gives it a good crack, though. Sucking serotonin from its gleaming extremes, it’s perhaps the most pop-indebted, melodic effort on the record. Pritty and Aaron Cartier are the jewels in its crown, with Pritty being responsible for potentially the most hilariously unsexy rap verse ever penned: “Said I just wanna see you in your PJ’s / Leave em on baby girl it’s been a long day.” Ravenna Golden’s verse creeps in shy and restrained, with a softly-softly beat that politely pops like bubble wrap, following in the tradition of Laura Les’ capabilities under osno1. Sometimes, these subtle touches of vulnerability can feel the most radical.

Cake Pop seem to toy with this idea of grabbing what would be more chaotic, maximalist sounds, pinning them to the floor and muffling them. ‘Cake Happy’ is the sound of a trance-like club beat smothered, before kicking free and blowing out into Dylan Brady’s signature kick-drop basslines. ‘Ether’ is similarly restrained to some extent, proving that hyperpop isn’t simply just turning everything up to 11 just because you can, but about the child-like approach of playing with the elasticity of music, contorting it and following it to both extremes.

While ‘Whistle’ and ‘Boom’ are bombastic and mega-bouncy, they would fit comfortably side-by-side on Spotify’s Hyperpop playlist without drawing too much attention to themselves. But Cake Pop more than make up for that with ‘Pombachu’, a track featuring rapper Robel Ketema which melts the worlds of hyperpop and East African rhythms into one frenetic, curiously infectious track. It’s a meet-cute unlike any other: a hybrid we never knew we needed, and yet, here it is, a hidden gem buried on the track list, and one of Cake Pop’s most refreshing explorations.

But of course, with this level of feral experimentalism and such a messy convergence of minds, there are missteps that, while invariably creative, don’t quite stick. The soupy, viscous ‘Magic’ with Aaron Cartier is the embodiment of the sweaty-palmed panic of your phone running on 1% – and not in a fun way. Not to mention ‘Candy Floss’ the pseudo-ballad curveball that sticks out like a sore thumb, betraying a glimpse of feeling that the rest of the album seems to mock.

This is the thing, though. With Cake Pop, a collective of artists who push music in uncomfortable directions with their alien, cellophane-flavoured sound design and no-fucks-given approach to creativity, a lack of cohesion isn’t even credible criticism. If Cake Pop only wanted to push the envelope just that little bit further to find new, uncharted territory in an increasingly rigid hyperpop universe – and to have fun doing it – then ‘Cake Pop 2’ truly is a thing of great, rowdy, ridiculous beauty.