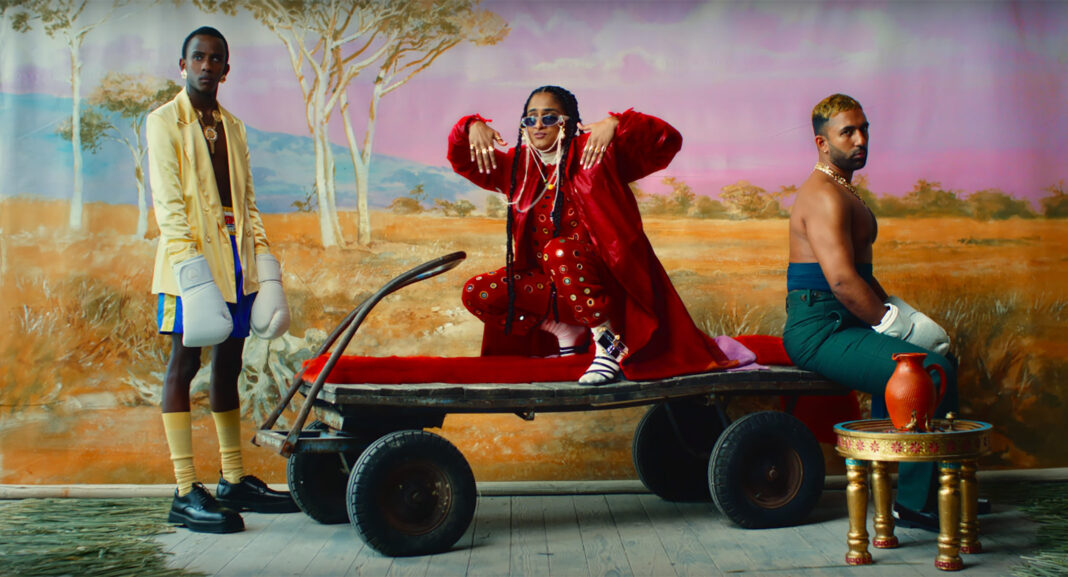 Cardi B is back and the monster success of ‘WAP’ certainly hasn’t changed her. ‘Up’ is exactly the kind of follow-up you’d expect: bold, braggadocious and delightfully provocative. Cardi’s first solo release in some time weaves neat bars – “Racks stack up Shaq height” – with boasts of Balenciaga, Birkin and Bentley and all bodes well for her upcoming second album. “Up and stuck” has its roots in Atlanta – introduced to Cardi by way of ex-ex husband Offset – and the ensuing refrain of “if it’s up, then it’s up, then it’s up, then it’s stuck” is a self-fulfilling earworm. The accompanying music video, predestined to set Ben Shapiro ablaze, sees Cardi grinding on the grave of 2020 and engaging in some not quite coronaviiiiiirus-friendly behaviour with her dancers. Plus, who needs backing singers when you’ve got a wig full of singing doll heads?

As a member of our Future Five, Priya Ragu spent 2020 generating unprecedented levels of buzz off the back of one perfect song: ‘Good Love’. Her follow-up lives up to the promise held in that track: ‘Chicken Lemon Rice’ is a glorious celebration of diversity, “fusing African rhythms together with Indian talas, and then sprinkling that Tamil twang on it.” Produced by her brother, Japhna Gold, the track takes Ragu’s fresh take on R&B a step further as she switches between dialects and vocal styles seamlessly: “Flavours how you mix…chicken lemon rice.” With an impeccable vibe and a beat that moves you, ‘Chicken Lemon Rice’ is a track just longing for the dancefloor.

Releasing a critically-acclaimed debut album little over six months ago wasn’t enough for Hayley Williams, who dropped the surprise album, ‘FLOWERS for VASES / descansos’ on Friday. The album’s standout, ‘My Limb’, was leaked a week early with Williams’ approval, after she dropped a candle and a physical copy of the song on a fan’s doorstep. Williams’ solo output continues to delve further into a sense of eeriness and unease, juxtaposing Paramore’s increasingly delightful power-pop sound. “If your part of me is gone now, do I wanna survive?” she asks in bleak fashion. It’s a track that shies away from daylight, opting instead for the cover of darkness and ruminating on the visceral, bone-deep pain of a break-up. It simmers with menace but never explodes.

“I used to think about myself like I was a talented liar / Turns out that all my friends were trying to do me a favor,” Julien Baker sings, a gut-punch beginning to her new track, ‘Favor’. Friends are here to provide literal back up here, as she recruits the other two-thirds of indie rock’s answer to the Avengers, boygenius, to lend a hand on backing vocals. Phoebe Bridgers and Lucy Dacus‘ influence swirls in the background but ‘Favor’ is an unequivocal showcase for Baker’s lyrical fervor: there are flecks of early 2000s emo here, with fretful sentiments – “How long do I have until I’ve spent up everyone’s goodwill?” – stinging like an open wound. In a press release, Lucy Dacus revealed: “we sang on ‘Favor’ in Nashville the same day we recorded vocals for ‘Graceland Too’ and a song of mine. That day had the same atmosphere as when we recorded the boygenius EP.” Until boygenius reunite in earnest to devastate and delight in their own unique way, we have collaborative appetisers like ‘Favor’.

Miss Grit – the alter-ego of Korean-American musician, Margaret Sohn – is the riot grrrl for a new decade. On ‘Buy The Banter’, a snarling highlight from her ‘Imposter’ EP, she grapples with the pressure of others’ expectations – “If they think you’re somebody, you’ll have to prove you’ve got what they want” – but she’s also determined not to lose her sense of self and “dissolve into nothing”. If her lyrics betray any uncertainty, her sound is the antithesis. She wields an electric guitar like St. Vincent and shares Mitski’s disaffected vocals, and though Miss Grit has a kinship with musicians who cut their teeth before her, she’s undoubtedly forging her own path. ‘Buy The Banter’ culminates in an all-out assault on the ears: a whirlwind of fuzzy guitars and booming snares, and with early music this self-assured, it’s hard to find any evidence of an imposter.

“No, I can’t look at peaches now” might sound like an attempt to watch Call Me By Your Name in the wake of finding out far too much about Armie Hammer, but on Josef Salvat’s ‘Peaches’, it’s a soft lament to a lost relationship set to an electropop track. Synths sparkle over a groovy, melancholic beat – echoing fellow-Aussie, Troye Sivan – and ‘Peaches’ is a glossy ode to letting go and finding your way back after heartbreak: “Because I lost the best thing I had / It’s time to do things differently now”