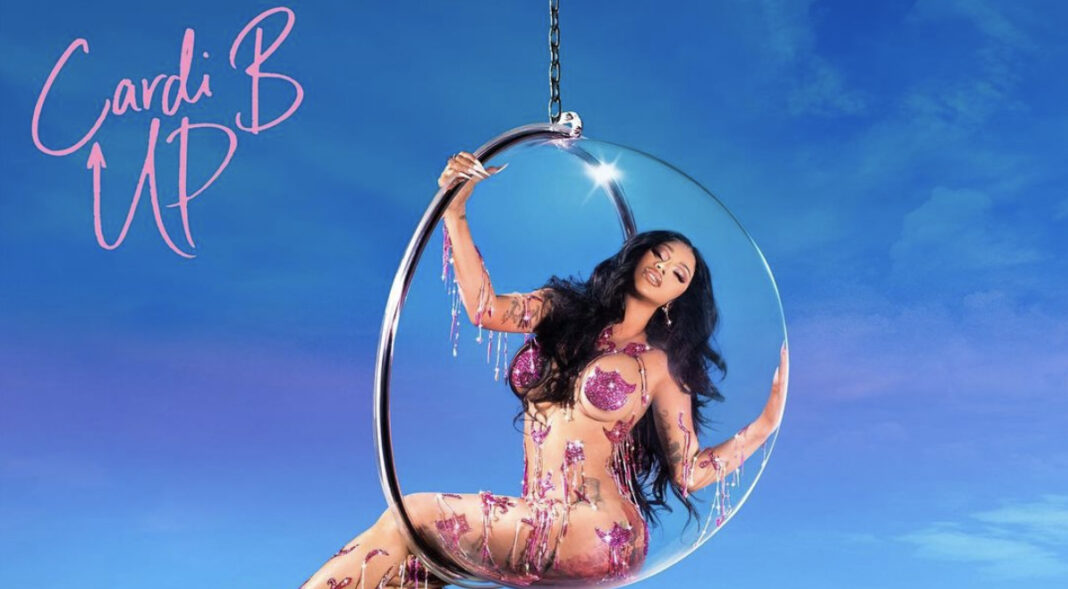 With only one album under her belt, Cardi B is already one of the most famous artists on the planet. With latest single ‘WAP’ hitting three times platinum in the US, fans eagerly await Cardi’s second album, which is set to be with us at some time this year. So get a bucket and a mop, because here’s everything we know to date about the new Cardi B album.

Hopefully soon, but it’s not yet finished. In an interview with XXL, Cardi said she needed to “go away for a long time” and finish the record.

The prospect of doing press via Zoom, wasn’t proving to be motivation either. “I don’t feel like if I do like, an album promo run and everything, like, there’s no feelings to it, me doing interviews with people through a computer. I want to meet up with people. I want to have a conversation. It’s a better vibe.”

Cardi released her most recent single, ‘Up’ on February 5. The single artwork sees a naked-but-bedazzled Cardi, suspended high in the air above a rooftop swimming pool. With no featured guest on the song this was Cardi’s first solo work in a while.

The video to ‘Up’ has already amassed a casual 110 million YouTube views but we’re still not sure if it will feature on the upcoming album.

Fan pressure has been mounting for a while. On an Instagram Live on October 17, 2020, Cardi told people that she was due to be turning in the album in seven days time. Alas, she has still not delivered.

Though it seems that Cardi has long been reluctant to put an exact date on the album. In February last year, she offered: “I can never put a date on it because, like, when you feel like you’ve got those songs, that’s when it’s gonna come out,” she explained. “I cannot put a date on my ears, you know what I’m saying?”

And in August, things seemed a little hazier still, with Cardi telling interviewer Angie Martinez: “I have other projects coming out that doesn’t involve music, but when it comes to music I think I’m going to put out another single. I don’t have my album ready yet. But even when I feel I have my album ready, I’m still debating when I should put out an album too.”

When asked if this would be her ‘Lemonade, she said: “This album is going to be really different. Of course, it’s going to have my ‘Lemonade’ moments, my personal relationship moments.”

What that means exactly, only time will tell. Will it address her recent difficulties with Offset? And their on-again-off-again divorce? Will she bash up his Bentley with a baseball bat? We shall see.

Back in November 2019, in an interview with Billboard, Cardi said that she was “thinking about her album 24/7” but seemed a little torn as to which direction to take it. “I feel like right now, what’s hot is like a ‘Twerk Sound’, so I’m like, shall I make my music sound like that? But I can’t only go with what’s hot. I still got to go with what I want to do.”

Who will feature on Cardi B’s new album?

It sounds like husband Offset could make an appearance. In the same Elle interview, Cardi said: “If you all are so curious to know about my relationship and blah, blah, blah, I’m going to put it in the fuckin’ music, and you can buy it, too. I’m not going to give it to you all for free.” But that could also just mean lots of dirt-dishing about him.

We can assume that mega-hit ‘WAP’ featuring Megan Thee Stallion will make it on the album – although it’s not a given.

Have we heard any songs from the new album?

She also shared a very brief clip of a track, captioned ‘Respect’, back in February 2020, which you can hear below.

Cardi announced her feature on a new track, ‘Me Gusta’ with Brazilian megastar Anitta which sees Cardi rap in Spanish. The song also featuresa Spanish verse from Myke Towers and was released on Friday 18 September.

Cardi said of the new track, before its release: “As soon as I heard his song… I kept repeating the hook in my head.”

As it’s an Anitta track, it seems unlikely it will feature on Cardi’s album.

Bookmark this page for more info on Cardi B’s new album, as we have it.