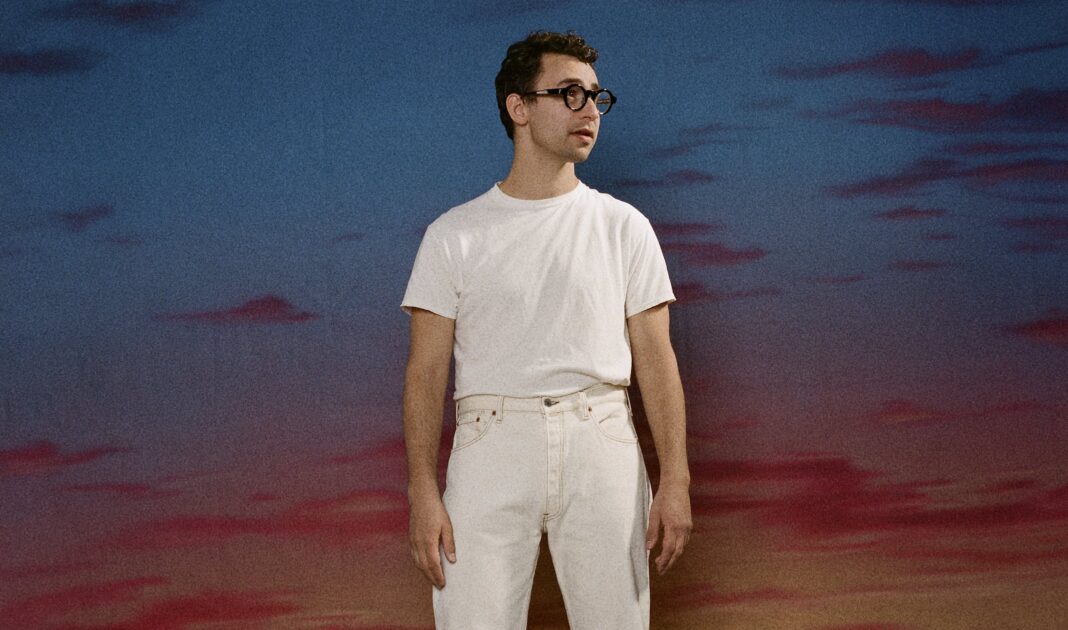 Imagine you have fallen in love, and you are taking your lover back to your hometown, the place where you are from. You might cycle around the streets of your past. You might show them your old house, school, the gold autumn trees, the bakery where your dad liked to buy pastries. Showing your new partner these things means “having to see yourself through somebody who you want to stay”. Going home becomes “a metaphor for showing them your truest self”.

That idea broadly underpins ‘Take The Sadness Out Of Saturday Night’, the third album from Jack Antonoff’s lovable pop outfit Bleachers. For Antonoff, going home means driving from New York to New Jersey. (Sopranos fans will be familiar with the route.) Antonoff literally took the new album on that journey, as if it were his partner: performing tracks in the Holland Tunnel, on a bus crossing the state line, and in a car with the finest New Jerseyan of them all, Bruce Springsteen.

In 2015, Antonoff, surely a frontrunner to inherit Springsteen’s Jersey mantle, started a New Jersey music festival. Shadow Of The City – named for “New York City’s shadow onto New Jersey, and that shadow cast, it creates an energy, it creates a hope” – embodies everything Bleachers are about, and especially the new record, on which he aimed for a “band-on-fire kind of New Jersey sound mixed with the way I write.”

‘You May Not Know Jack Antonoff. But You Probably Love His Music.’ ran a New York Times headline in 2017. Four years later, there’s no ‘may not’ or ‘probably’ about it. He’s since risen to superproducer heights, the pop brains behind huge releases from Taylor Swift, Lana Del Rey, St Vincent, and Clairo. A second album with Lorde is imminent.

His ascension is particularly impressive given that the current lo-fi folky trends, favoured by the artists he works with, sit at odds with his shiny eighties revivalism. How does he squeeze his stadium-sized heart into that quiet, bleary bracket? Antonoff hurled every pop appliance – kitchen sink and all – at Bleachers’ previous album, 2017’s ‘Gone Now’. Samples, sound effects, self-reflexion, reprises, repeated motifs, and a lot of synth: sometimes this maximalism produced confused tatters, like blowing too much air into a balloon, but it also resulted in big, brilliant songs like ‘Dream Of Mickey Mantle’ and ‘Don’t Take The Money’. They recalled Bleachers’ impeccable, eighties-leaning debut, with tracks like ‘Reckless Love’ and ‘I Wanna Get Better’ that hit all the right notes of melancholic euphoria.

But he’s honed his sound to fit the times – too much, some may argue (isn’t that Lana stoned at the nail salon?) – and his recent lower-case pop production seeps into ‘Take The Sadness Out Of Saturday Night’. The album opens with low, creaky strings (arranged by St Vincent) on ‘’91’, a track about nostalgia’s sleight of hand, written with Zadie Smith. Organic, live instruments dominate all of the songs, from wheezy brass to scribbled acoustic guitar, and the vocals are frequently hard to catch, as if playing in the next room. He has an Elliott Smith moment on hazy ballad ‘Secret Life’ with Lana Del Rey, but the final three songs, ‘45’ – a celebration of lost-but-not-lost love – ‘Strange Behavior’, and ‘What’d I Do With All This Faith?’ are truly bare bones, a lean and dusty sound that stops the album bursting through into Bleachers’ usual reach-for-the-rafters realm.

Yet by harnessing the potency of the COVID quarantine – that powerful hunger for live shows – and trying to capture their live energy on ‘Take The Sadness Out Of Saturday Night’, Antonoff and his band have created a breathless, emotionally open album, scrappy and warm, that retains Bleachers’ earnest enthusiasm. You hear it on the chirpy, Genesis-esque ‘Stop Making This Hurt’, or ‘Don’t Go Dark’, a track that sounds like Springsteen’s biggest songs tumbling around together in a washing machine.

Antonoff’s typically anthemic lyrics, where every line sounds like the end of an eighties movie (“you steal the air out of my lungs, you make me feel it”) haven’t gone away, either. Lines like “I wanna run / I love to chase every feeling”, or “I’m after a big big big big big big big big big big big life”, conjure that heart-in-your-mouth euphoric pop feeling, that urge to escape towards the glorious light – also heard on songs like The Killers’ ‘Caution’ or Springsteen’s ‘The Promised Land’ – to “break free of New Jersey”.

Album kingpin ‘Chinatown’, which drives out of the city, “honey, right into the shadow”, is so good it can handle Springsteen himself, who shows up to take the song to glowing heights. And his influence permeates the entire album. The loose instrumental breakdown on ‘How Dare You Want More’ summons the spirit of E Street Band live shows, while plaintive howls a la ‘I’m On Fire’ echo throughout tracks that refer to promised lands and dying dreams. “So long Bobby,” begins the last song.

‘Take The Sadness Out Of Saturday Night’ is a yearning, lower-case album that stands in the shadow of a shinier caps-lock version, just as New Jersey stands in the shadow of New York City. Going home to his truest self clearly paid off, for Antonoff’s infectious love for Jersey music drives the record beyond its lo-fi style – just look at his giant dopey grin while performing ‘Chinatown’ with Springsteen on the roof of New York City’s Electric Lady. The new album is a testament to the fact that whatever quietness that love travels through, its trace endures, ready to leap into the air once more.