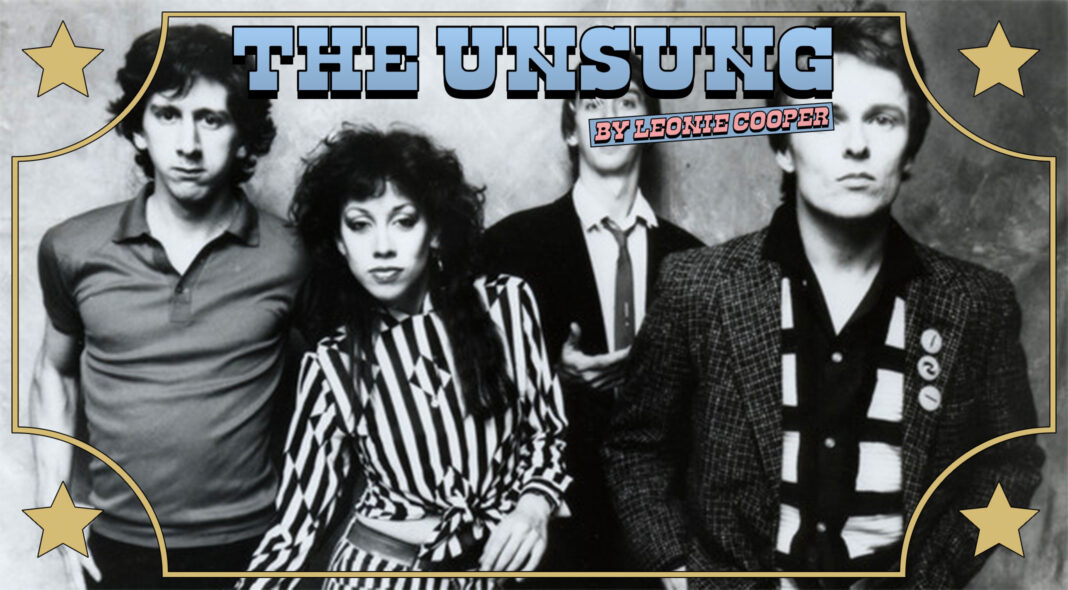 San Francisco’s Pearl Harbour and The Explosions were a pretty neat new wave band; all sharp shoulders and tight riffs and with one minor US hit, 1979’s chippy ‘Drivin’’, under their skinny belts. But it’s the fabulous frontwoman’s punked-up rockabilly phase that really makes me want to backcomb my hair to a worrying height before drinking too many tiki cocktails and getting into screaming match outside a North London kebab shop – all of which are very good things, especially the kebab shop element.

Born Patricia Gilbert and taking her stage name from the fact her parents were married on the day of the Pearl Harbour attacks in 1941, Pearl Harbour was born on an army base in Monterey, California. When she was six months old her family moved to Germany and to say they had a shitty time of it was an understatement. “In the late 50s all through the 60s into the early 70’s, there was still some Nazi shit going on,” she told Patterns and Tones in 2013. “I lived in a little town in Germany in the 60s and they still held Nazi party meetings every Friday night. My mother is Filipino, I have four older brothers who all skateboarded and were being bad Americans in this little German hick town. I thought we were all going to get killed to tell you the truth but no one ever fucked with us.” To distract her from the edgy scenes all around, Pearl discovered the divine Ronnie Spector, who she started trying to emulate from the age of seven.

In the early 1970s a precocious teenage Pearl took herself off to live in San Francisco. The city’s nascent rock and roll scene and LGBTQ+ community accepted her and her scruffy beehive with open arms. After winning a local talent contest as a tap-dancing boxer – tying for first place with Australian drag queen Doris Fish – Pearl ended up singing background vocals for glam rockers The Tubes, as well as learning all about the importance of high camp and trashy glamour from Doris.

At the same time, she joined a local band called Leila and the Snakes where she would sing while hula-hooping. As fun – and knackering – as that sounds, after a couple of years she became desperate to do her own thing and so Pearl Harbour and the Explosions were born. They released a tight, talked-about new wave album and toured with Talking Heads but soon Pearl felt the pull of the up-and-coming rockabilly movement. The rest of the band weren’t too sure, so Pearl broke away and moved to the UK to focus on her new sound.

Music wasn’t her only reason for heading to England. Pearl had married The Clash’s bass player Paul Simonon and made a whole new gang of British pals, including Ian Dury, who gave her a gift of a British rhyming slang dictionary to help with her lyrics and who she joined onstage at The Hammersmith Odeon before many tours with The Clash.

In 1980 Pearl released her debut solo album, ‘Don’t Follow Me, I’m Lost Too’, which featured a hard-edged take on Wanda Jackson’s ‘Fujiyama Mama’ as well as the swinging ‘Out With The Girls’, a night of boozing and telling creepy men to piss off we can all still relate to as she hollers: “Me and the girls were fooling around/went to a gig in Camden Town.”

It received decent reviews – The New York Times said “She sings everything, from the country weepers to the all-out rockers, with conviction” but as Pearl recently explained, she was ditched by her label Warner Bros for not listing the famous musicians who played on it, which included Paul Simonon, Topper Headon and Mick Jones from The Clash as well as Wilko Johnson and Mickey Gallagher from Ian Dury & The Blockheads. It’s funny that they couldn’t see that the real gem was always Pearl.