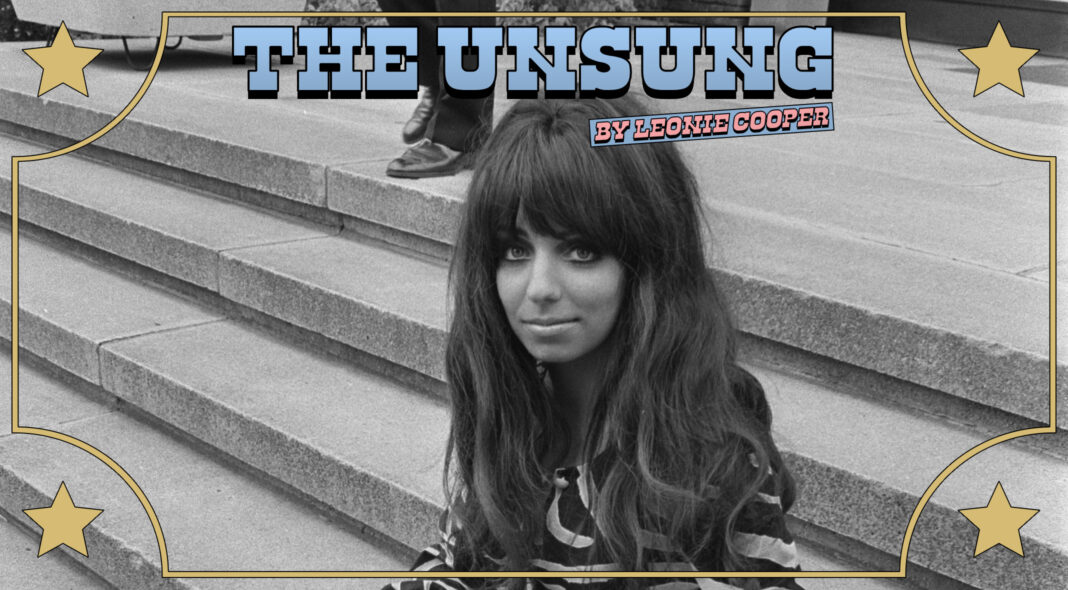 If you’ve ever wondered where Claudia Winkleman pinched that thick glossy fringe and hardcore eyelinered style from (aka the only thing I watch Strictly Come Dancing for, honest) then look no further than the divine Mariska Veres. As frontwoman of Dutch psych-rockers Shocking Blue, Mariska’s gothic go-go girl look might have been what first drew 1960s pop-pickers to the band, but it was her vocal – a brilliantly bassy and nonchalant sounding thing – which got them truly obsessed.

Born in 1947 to Hungarian and German parents, music was in Mariska’s blood. Her father was the Romany violinist Lajos Veres and she grew up playing along with dad on the piano before branching out and singing with local bands in The Hague, including a group called Bumble Bees as well as recording a number of solo singles. Shocking Blue were already a going concern in their native Netherlands before Mariska joined, releasing harmless Monkees-style swingers like ‘Lucy Brown is Back in Town’. But when original frontman Fred de Wilde left to join the army, everything changed. Spotted singing at a party with the Bumble Bees by Shocking Blue’s manager, the band’s songwriter and guitarist Robbie van Leeuwen was also instantly sold on her unique talent. “She had a very impressive voice, quite different from all the other girl singers,” he later said. “She was rather like Grace Slick from Jefferson Airplane.” As soon as Mariska joined Shocking Blue as their first female member, the whole dynamic of the band changed and she belted out their first song together in a way that no man could.

A tale of female desire, passion and – let’s be honest – vast superiority, ‘Venus’ might have been a touch creepy in the hands of a male vocalist, but with Mariska belting it out, it was empowering and aspirational with a dose of good humour to wash it all down. “A Goddess on a mountain top/Was burning like a silver flame/The summit of beauty and love/And Venus was her name,” she sang with a defiant shrug as the band rumbled away at the swirling, Doors-esque tune.

To some, the song might have sounded somewhat familiar. That’s because it was, lifting its irrepressible melody from an early 1960s version of folk tune ‘The Banjo Song’ which was recorded by Mama Cass’s first band The Big 3. Most, however, were unaware of its roots and the massive tune went on to sell seven million copies worldwide, conquering the charts in a way that their closest sonic counterparts, San Francisco’s Jefferson Airplane – who spent the latter part of the 1960s only getting heavier and less radio-friendly – would never manage. “In one year, everything we dreamed about happened,” said van Leeuwen.

With the huge global hit in their back pocket, Shocking Blue went on to release a run of equally enticing singles, including the searing ‘Send Me A Postcard’, in which Mariska’s distinctive wail is backed by an almost Black Sabbath-worthy heavy metal stomp. It featured on 1970’s ‘Scorpio’s Dance’, which saw them also experimenting with country rock on a jangling cover of Harlan Howard’s ‘Sally Was A Good Old Girl’.

Their band’s work ethic was relentless and they released 11 albums in eight years, no doubt helped by the clean-living Mariska’s wholesome lifestyle. The Independent reports that she “loved cats, didn’t smoke, drink or do drugs”. Yet even despite the cat-centric chill Mariska brought to the band, they didn’t last. In the mid-1970s Mariska went solo and would weave in and out of various genres close to her heart, forming the Shocking Jazz Quintet in the 1990s and a decade later releasing an album of Romany jazz called ‘Gipsy Heart’.

Mariska was only 59 when she died of cancer in 2006, but she leaves behind one of the most iconic songs of the 20th century in ‘Venus’, last heard blaring out of The Queen’s Gambit soundtrack, as cool as it ever was.