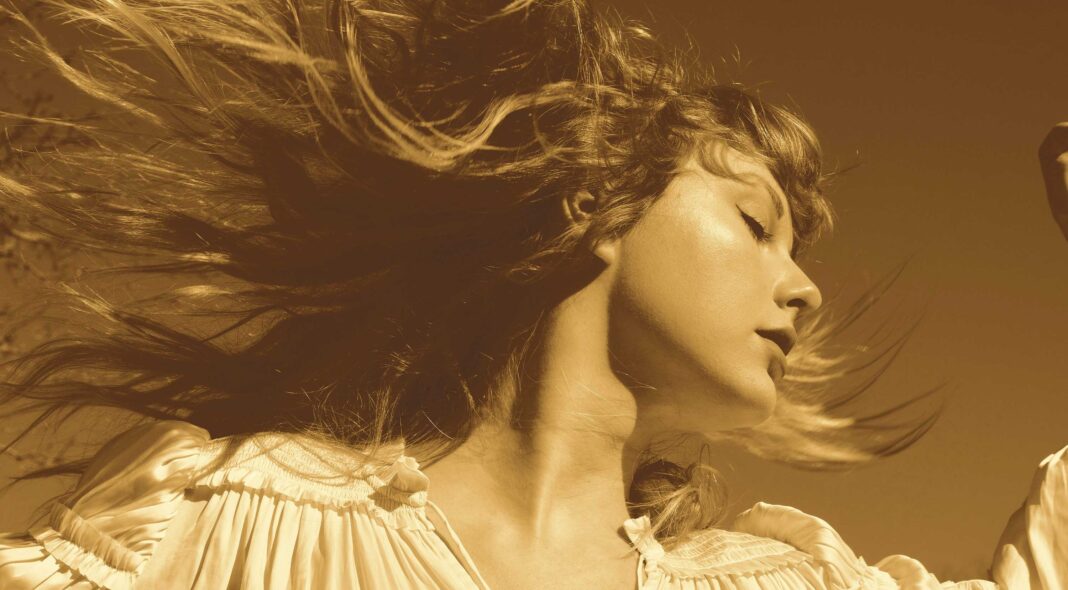 “The battle was long”, Taylor Swift sings on ‘Change’, a fitting descriptor for her dispute with Big Machine label boss Scott Borchetta and management giant Scooter Braun over the masters of her first six albums.

“It’s the fight for our lives, but we’ll stand up champions tonight”, the lyric continues. She’d previously said she’d been stripped of her life’s work when Borchetta sold the masters to Braun, and determined to reclaim her albums, began rerecording them, starting with her 2008 country-pop crossover breakthrough ‘Fearless’. Initially written at 18 years old, Taylor’s been through a lot since then, but these tracks have stood the test of time.

We could go on about the vocal differences and tiny lyrical tweaks, but that’s not the juicy stuff. Unlike a regular Swift album cycle, we’ve heard most of these songs before, so the Easter eggs and liner-note hints aren’t as fruitful as usual, but there’s still plenty to pick apart. The songs ‘From The Vault’ have us rummaging through 2008 gossip mags, some old tracks have very different meanings now, and there’s a whole lot of thirteens to be decoded, so let’s get into some of these theories.

In true Taylor Swift fashion, the re-recording of her sophomore album arrives thirteen years after its original release, which could be one of the reasons it’s the first of ‘Taylor’s Versions’ to come out, but it’s not the only 13 in her release strategy. Dropping on 9th April, or rather 9/4, 9 + 4 = 13 explains the date, and it’s also 26 tracks long, which is double 13. We know she wrote the album as a teen, but we didn’t expect another maths lesson.

She’s her own Romeo

‘Love Story’ was the song that catapulted Taylor to superstardom way back in 2008, so of course it was the first song to drop from the re-recordings. The new album cover features Miss Swift flipping her hair in a similar pose to the original artwork, although in the opposite direction, but notice her clothes? No longer does she wear the Princess dress, but Romeo’s shirt from the ‘Love Story’ music video.

While there aren’t many notable differences between the originals and the new recordings, the track ‘Change’, which closed out the ‘Fearless’ non-deluxe version the first time around, was written about being an underdog in the music industry. Before Taylor’s big break, she was a country teen on a small label fighting for mainstream success. As her story with Big Machine took a turn for the worse, ‘Change’ takes on a new meaning and can easily be read as a fuck you to Scott Borchetta and Scooter Braun while she battles for ownership of her own albums.

It’s funny to listen to baby Taylor in awe of a boy playing in bars and wanting his picture for her wall on ‘Superstar’ nowadays, given ‘Fearless’s Grammy-winning legacy. The high school breakup she sings of on ‘White Horse’ is long forgotten as she seems to have found the one who’ll actually treat her well, ode to her mother ‘The Best Day’ is even more sentimental following her mum’s cancer battle in 2015 (which was later written about on ‘Soon You’ll Get Better’ in 2019), and Taylor’s wise-beyond-her-years lyricism is extra prominent on ‘Fifteen’ as she preaches following your dreams instead of chasing boys on the football team. We were both young when I first saw you… we certainly were Taylor. We certainly were. Sniff.

Keith Urban has been there from the start

Among the new ‘From The Vault’ tracks is a duet with country legend Keith Urban. It’s not their first collaboration (she previously appeared on his 2013 track ‘Highway Don’t Care’), but he’s particularly significant in her ‘Fearless’ era. She opened for him on his 2009 tour, not long after the album’s first release, right before her global domination.

Already to familiar to some eagle-eyed Swifties, ‘Bye Bye Baby’ was originally called ‘One Thing’ and got leaked some time ago. A title change and some lyrical tweaks, ‘Bye Bye Baby’ closes out Fearless era 2.0, indicating she’s moving on for good. Its lyric video could leave some clues as to which record is next; some see the ‘Blank Space’ car in the backdrop.

‘You All Over Me’ and ‘Mr. Perfectly Fine’ revisit an old flame

Who remembers when ‘Fearless’ dropped in 2008 and Joe Jonas’ brutal 26-second phone call break up with Taylor was the talk of teen Hollywood? Back then, ‘Forever & Always’ was pretty much confirmed to be about the situation, but as we hear new songs from the same era, some fans are theorising ‘You All Over Me’ and ‘Mr. Perfectly Fine’ were born out of the same heartbreak. It makes sense – the lyrics “Hello Mr. Perfectly Fine, how’s your heart after breaking mine” scream first breakup, plus the lyrics line up with other Jonas-inspired tracks ‘Forever & Always’ and ‘Last Kiss’.

‘folklore’ and ‘evermore’ lead to the new ‘Fearless’

If we know anything about Taylor Swift, it’s that when she starts a new album cycle, she actually started it three album cycles ago. If you’re a diehard, you’ll have caught the clues, if not, you might just be noticing how it all lines up afterwards. Some say the ‘willow’ video picks up where ‘cardigan’ leaves off, but the golden world she steps into at the end of ‘willow’ could be the fairytale land of the ‘Fearless’ era. ‘Fearless (Taylor’s Version)’ was also recorded with Jack Antonoff and Aaron Dessner, who she worked with for her 2020 albums, making it even more impressive how uncanny the sound is.

Rumoured to already be in the works is the rerecording of Taylor’s first real pop opus, ‘1989’. The second record to earn her a Grammy Album of the Year gong and probably her second most well known, the release of single ‘Wildest Dreams (Taylor’s Version)’ is already pencilled in and will feature in new animated film ‘Spirit Untamed’ and a snippet can be heard in the trailer.

Some fans are suggesting the release order of Taylor’s versions was teased back in 2019 as she posted pictures from a Rolling Stone magazine shoot. First yellow, the colour associated with ‘Fearless’, then blue, which signifies ‘1989’, followed by self-explanatory ‘Red’, and then a bright purple cloak in a similar shade to the dress she wears on ‘Speak Now’s artwork.

READ MORE: Taylor’s embraced her teenage self – and so should you