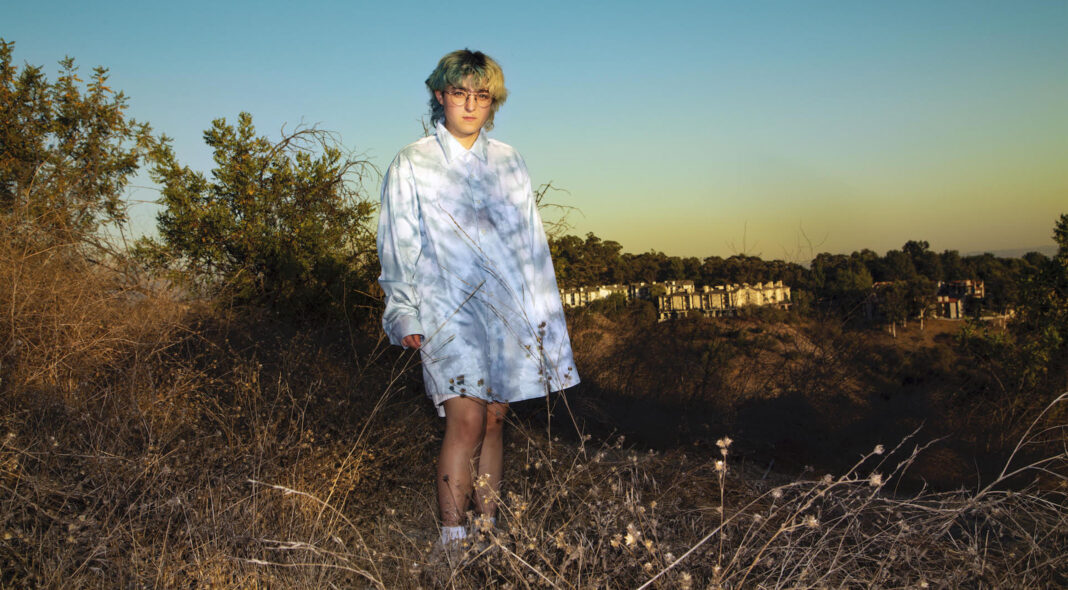 Claud sounds nothing like a monster when they sing – quite the opposite – but upon learning that their debut album ‘Super Monster’ is named after a Daniel Johnston painting, and subsequently hearing their offbeat take on pop, the title makes perfect sense.

Hero, fiend, light, dark: ‘Super Monster’ holds several meanings at once, reflecting the anti-pigeonhole stance that also explains Claud’s position as debut artist on Saddest Factory Records, Phoebe Bridgers’ new label. After making music as part of duo Toast, in 2019 Claud released their debut solo EP ‘Sideline Star’ and caught the ear of Bridgers, signing to Saddest Factory in late 2020. ‘Super Monster’ is the first fruit of that alliance. Featuring Clairo, Nick Hakim, and Unknown Mortal Orchestra’s Jake Portrait, and mixed at Electric Lady, the record hints at what could be achieved on a label that has first-hand understanding of young, independent-minded artists.

‘Super Monster’ fulfils current standard bedroom pop criterion: intimacy via scribbled lyrics and sweet vocals, with a force to match the intensity of private emotion – not necessarily slow or sleepy, though always with an introverted slant. But the album questions whether Claud should be slung in the same group as Gen Z artists like Clairo, Beabadoobee, and Soccer Mommy. ‘Super Monster’ slips a doorstop under every pop genre, keeping all ways open.

The record similarly opens up to emotion. Claud captures the fluctuant, high-octane nature of relationships in your twenties, constantly at the mercy of erratic hearts and circumstances. “There’s a million reasons for our distance,” they sing on stand-out pop ballad ‘This Town’. But cynicism is nowhere to be found. They’ll appreciate the ride, even if it takes them someplace painful: “Anywhere the wind blows / That’s the way that I’ll go”.

Growing up between California and Chicago, transience isn’t new to Claud, nor is it reserved for the young: Claud watched their divorced parents say hello and wave goodbye to date after date. But ‘Super Monster’ is reserved for the young. “Tell me tell me what you mean,” they implore on ‘In Or In Between’, an ode to youthful ambiguity. ‘Cuff Your Jeans’ takes in as many settings as a Bridgers song, from Texas to California, dorm room to cemetery. “Maybe one day I’ll get to take you here,” they conclude wistfully: the future’s ambiguous too.

Whether for good or bad, the lyrics tumble straight out of songwriting school, and all thirteen tracks ooze the noughties influence that’s crept in since Gen Z came of age and picked up a guitar. Claud melts down the eclectic decade into a well-produced, if sometimes unmemorable sound. ‘Guard Down’ recalls dream-pop duo Summer Camp. ‘That’s Mr Bitch To You’, a catchy comeback to a transphobic remark, indulges in emo pop-punk, ‘Gold’ exudes dancefloor synth, and ‘In Or In Between’ channels Claud’s inner r’n’b star. ‘Ana’, meanwhile, sounds so much like a Bridgers song you wonder if Claud is the first in an army of mini-Bridgers, ready to conquer the music world.

But – as is so often the case – perhaps the most significant influence is Prince, who pioneered the kind of pitch alterations Claud experiments with. Several Clauds sing on this album, radiating Prince’s playful androgyny to make a more serious point. Mainstream pop still fails to give enough space to genderqueer perspectives. Artists with an accessible, easy sound, an outsider outlook, and Phoebe Bridgers on their side, have a chance to change that, and with ‘Super Monster’, Claud steps up as a spokesperson for young people finding their place in a fluid, shifting world.