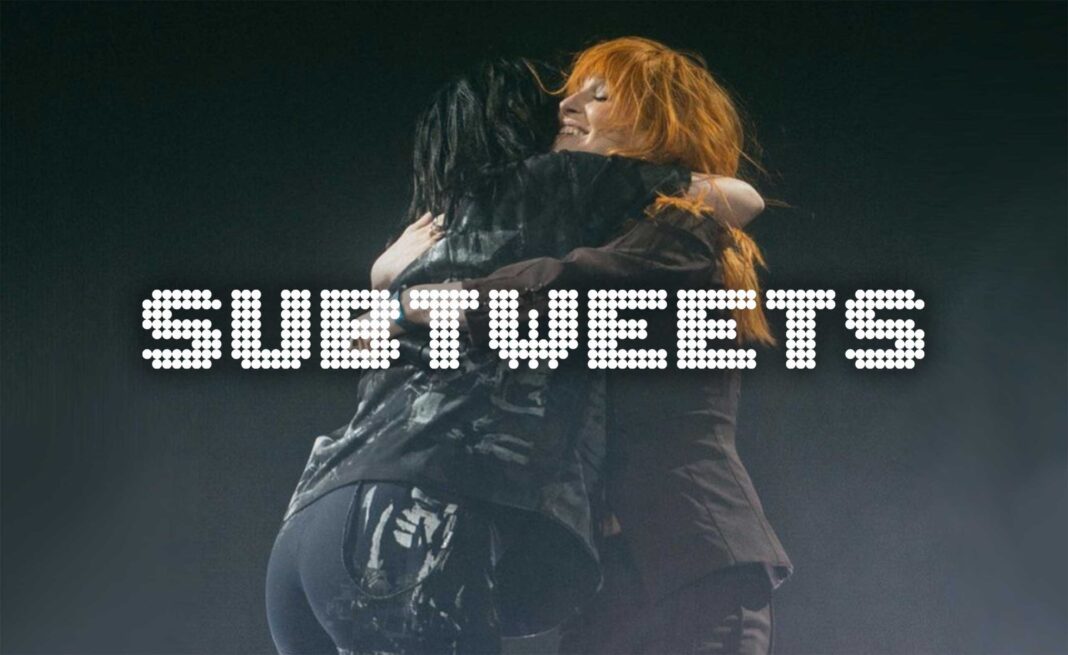 Right across the board, artists seemed to step their efforts up for Coachella Weekend Two. Wanting to go bigger and better than the weekend prior, there were more cameos, more surprises. In the case of Billie Eilish, a true audience treat took the form of a guest appearance from one Paramore legend Hayley Williams, dueting on an acoustic rendition of ‘Misery Business.’ As long term fans of one another, both women were on impeccable vocal form, delivering harmonies with impressive perfection given Coachella’s reputation for poor wind-condition sound. Harry Styles might have had Lizzo and Shania Twain, but Hayley and Billie was this year’s undeniable ‘I was there’ moment.

Amidst all this excitement though, some fans and music commentators did raise a (pierced) eyebrow at the choice of song. As any Para-scholars will know, ‘Misery Business’ hasn’t been played live since 2018, when Hayley Williams made the onstage announcement that they would be “moving away from it” in light of its anti-feminist narrative. Talking to website Track 7, she explained that the problem was not necessarily in the story that the song tells, but “the way I tried to call her out using words that didn’t belong in the conversation. It’s the fact that the story was set up inside the context of a competition that didn’t exist over some fantasy romance.”

As Paramore’s usual set-closer, this choice made a big stand, and Williams was praised for being mature enough to self-reflect on its potential slut-shaming, in keeping with her wider actions of BLM, LGBTQIA+ and feminist allyship. But bringing it back for Coachella, some fans feel that she was merely cashing in, abandoning her beliefs in light of a big opportunity.

Coming as a total surprise, I myself was a little surprised to hear that classic riff live once again. At first, it sat a little uncomfortably, but as the show relaxed into itself, it became clear that this was a moment of genuine fun. The key offending word ‘whore’ was removed, and Billie took on the tougher second verse instead of Hayley. The sheer joy emanating from Eilish’s face made it seem clear that this was a proper dream come true, established from a place of love. We do not know who decided on the song choice or the arrangement, but it seems likely that both would have had a say in how it went down, and wouldn’t have done anything they felt uncomfortable with.

It is perhaps no surprise that ‘Misery Business’ resonated with Eilish, not long out of her own teenage years. Williams was only 19 when she wrote it, and the perspective of the song feels very of its time, trying to wrangle with dramatic emotions and sensations of self-centred injustice. Emo, as it is well-known, had a huge ‘not like other girls’ problem in the mid-noughties, and a song like Miz Biz feels like a byproduct of that, written at a time where feminist education was not quite as easy to come by as it is now. Rightly or wrongly, it tells a story; a one-time form of expression that listeners might relate to, even if it’s not overly flattering for oneself to admit.

It is also worth considering whether Paramore’s shelving of the song made all of this a much bigger deal than other “problematic” songs might have faced. Condemning people endlessly from songs written in their youthh feels a little unfair, particularly when they have clearly done what they can to acknowledge it upfront. ‘Misery Business’ is hardly ‘Blurred Lines’ or ‘Blame It On The Alcohol’, two truly heinous songs where the artist has made significantly less apology. Williams is not the only female artist with a morally dubious song either; from Ariana Grande’s ‘Break Up With Your Girlfriend’ to Rihanna’s female-kidnap video for ‘Bitch Better Have My Money’, there are numerous examples of inspirational women mistepping on the opportunity to put their best feminist foot forward. There were no boycotts of these singles, no pressure for retirement. As a successful woman in a male-dominated genre, it is perhaps easier to critique Williams’s flawed-feminism than it is to reckon with the bigger problems of the Pop-Punk and Alt-Rock scene; numerous instances of abuse and coercion of minors, great swathes of significantly worse whore-narratives written by men. It is possible to critique both things simultaneously, but it is healthy to keep them in appropriate perspective.

There is also the fact that as an artist of significant influence on the current generation, Hayley Williams absolutely deserves to take credit for her own material, particularly when so many others are trying to do it for her. Her willingness to call ‘Misery Business’ out and give it a break does not invalidate the fact that it is a brilliantl song, a staple of the Gen-Z scene revival. Olivia Rodrigo interpolated it, Machine Gun Kelly has been covering a full version of it with seemingly no irony or apologies. If everybody else is cashing in, why shouldn’t Williams be able to take a moment to remind people that her work had a life before TikTok? Coachella was not a promise to bring the song back permanently, but rather a nice reminder of Hayley’s influence and performance power, setting us up nicely for Paramore’s (hopeful) 2022 return. One can feel that a song isn’t necessarily the fullest reflection of themselves without pretending that it never existed, or that it has taken on something of a second life in the midst of a cultural zeitgeist.

In the constant fight against misogyny, we all have a role to play. Williams was right to call these things out publicly, to reflect on the ways in which she has grown and changed. As a fan, I am grateful that this work has been done openly and glad that the song has had a break. But a one-off performance with a famous fan is not quite the same as a full scale backpedal or an invitation for people to forget. Time will tell if the song is back for good, but in the grand scheme of things, any post-Coachella snarkiness feels like pointing fingers in the wrong directions. When I hear ‘Misery Business’, I do hear those awkward words, but I also think of the ability to set yourself free from them; the many fans of all genders who were invited on stage to rock out to its guitar solo over the years, the sheer cathartic release of that pivotal phrase; ‘I watched my wild dreams come true/ not one of them involving you’. On a stage like Coachella, with an artist like Billie Eilish, what better reason to bring it back than to pass it to the next generation, knowing that they now have the education to take it with a pinch of salt? When you watch that performance back and see it for what it is – two women onstage together, killing one of the most popular rock songs of our generation – you might argue that the act is actually pretty feminist indeed.

READ MORE: Every Paramore song ranked in order of greatness