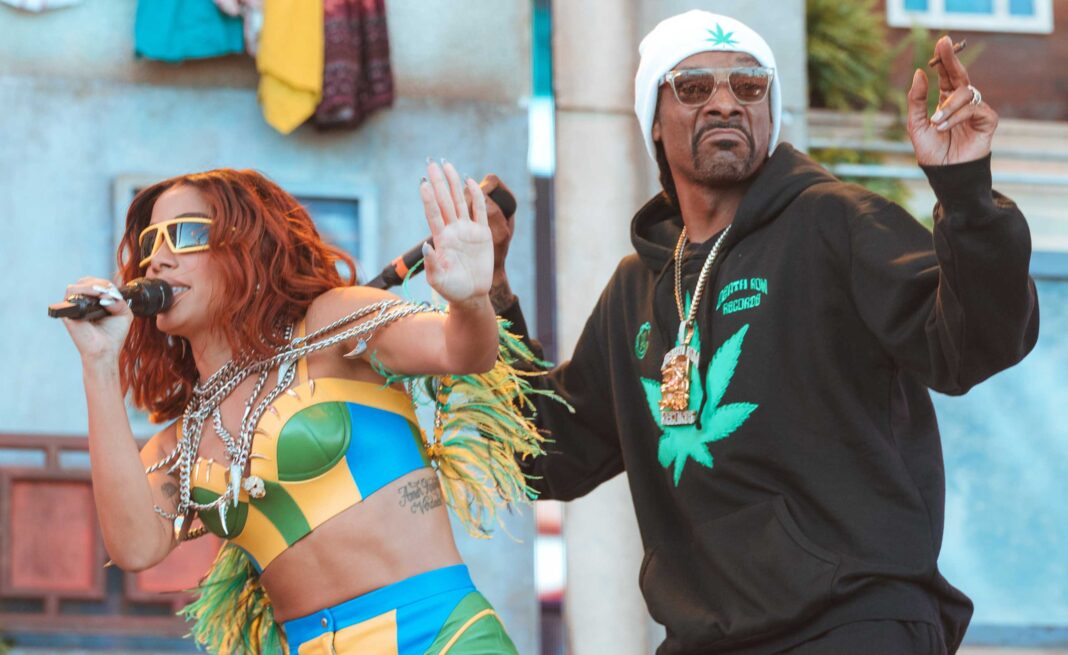 What is a festival set without a few sneaky little surprises? This year, the acts on Coachella’s 2022 bill have taken that notion and run with it, with everyone and his dog popping up for their five minutes in the desert sun. As day two kicks off, here’s a running total of all the surprise appearances so far.

Sad girls unite! Arlo and Phoebe first made friends when they performed in St Pancras Old Church in London. This weekend, in the Californian desert, the pair were reunited with Arlo joining Phoebe for stunning renditions of ‘Graceland Too’ and ‘I Know The End’.

It’s a bold artist who asks a blunt-smoking Snoop to be her hype man but a Vespa-riding Anitta wasn’t shy about being ushered on stage by the D.O.G.G. during yesterday’s afternoon set. Snoop, true to form, then stood back nonchalantly and watched the twerk-bonanza unfold. Later joined by Saweetie, during their collab. ‘Faking Love’, the Brazilian megastar clearly has an enviable phonebook.

Popping up for ‘Peaches’ with Daniel Caesar, what’s Coachella without a little Bieber cameo?

One for the ages. During his Friday night headline set, Harry brought out Shania Twain for a hip-shaking performance of ‘Man, I Feel Like A Woman’. Followed by a touching moment where Harry told Ms Twain that listening to her songs in the car with his mum was what taught him to sing, the pair duetted on ‘You’re Still The One’. Beat that, Swedish House Mafia!

Arcade Fire’s friends were perhaps our favourite guests of all. Quiet lads, but they brought the vibes.

On paper, composer Danny Elfman was a slightly peculiar Coachella booking, but the musician raged through a stonking metal-infused set of his legendary film scores – including Edward Scissorhands, The Simpsons and The Nightmare Before Christmas. The true surprise, though, was when he announced that Limp Bizkit’s Wes Borland was flanking him on guitar. Rowdy.

88rising’s main stage takeover made Coachella history as the first curated performance by a record label but it was the reunion of K-pop girl group 2NE1, after six years, that really made waves.

Billie Eilish is the youngest ever Coachella headliner. You would not blame her, then, for revelling in that moment with just her brother FINNEAS by her side. But instead, she brought two musical guests out to join her on stage. The first, Khalid, to sing their collaboration ‘lovely’. No real surprise there. But when during ‘Happier Than Ever’-opener, ‘Getting Older’, Damon Albarn appeared to sing the final verse with her, fans really lost their minds. Billie then introduced him as ‘Gorillaz’ Damon Albarn’, a move that made sense when the pair then dropped into a version of the band’s ‘Feel Good Inc.’

Emo kids rejoice, for her second-weekend set, Billie Eilish was joined by Paramore’s Hayley Williams to sing Paramore song, ‘Misery Business’, a decision particularly exciting for Paramore fans as the band retired from singing that song live some time ago. Williams returned to koin Eilish for rowdy set closer ‘Happier Than Ever’.

“Tonight I feel so happy and so proud to represent my country and my Latina community around the world,” said Colombian megastar Karol G during her main stage debut. The singer brought out fellow Latin artists Becky G and Tiesto to join her set.

The first time Doja played Coachella, it was to join Rico Nasty on stage back in 2019. In her first solo set, the artist honoured this legacy, bringing Rico Nasty out for a spiky rendition of their song ‘Tia Tamera’. Tyga later joined Doja for ‘Juicy’.

READ MORE: Phoebe Bridgers’ Coachella set proved her to be a storyteller for the ages