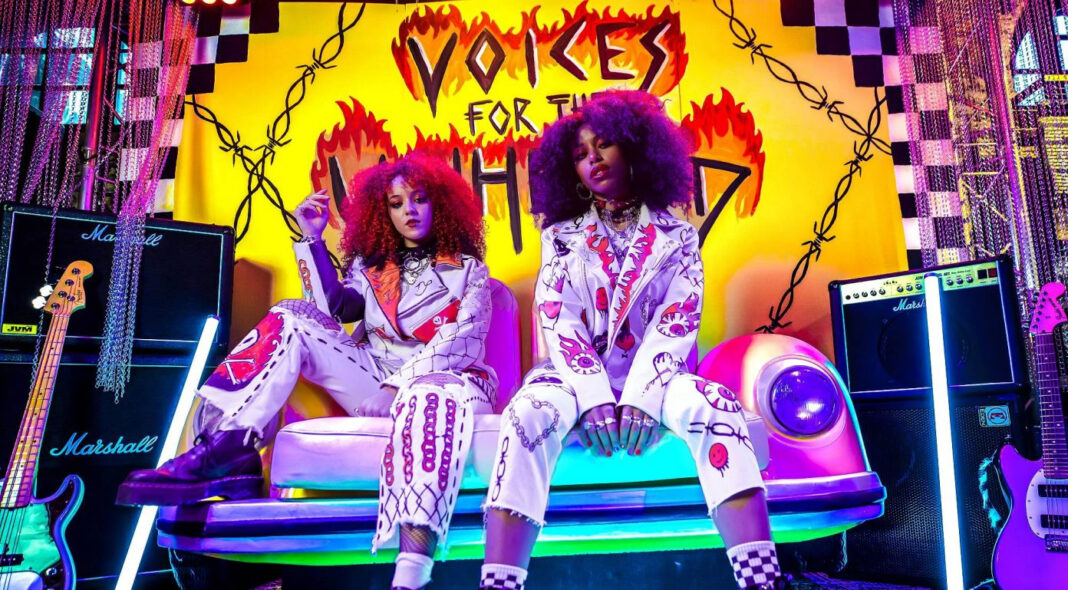 Showcasing POC alt-talent through a new curated vinyl compilation, ‘Voices For The Unheard’, Nova Twins (Amy Love and Georgia South) are vocal about the lack of diversity in rock and alternative music.

The new record, supported by Dr. Martens, is being released on limited-edition vinyl with 100 per cent of the proceeds donated to The Black Curriculum – a social enterprise working to improve the teaching of Black History throughout the UK. It’s available to pre-order now.

Starting life as a playlist, which you can listen to below, with ‘Voices For The Unheard’, Nova Twins aim to showcase the diverse range of incredible talent that exists in rock music – but doesn’t always get the same attention.

“There’s a lack of representation and understanding of POC alternative artists, particularly in the UK,” Love told NME. “People are happy for black people to be in R&B and hip-hop because they feel like it’s safe and that’s the done thing. These are genres that black people have pioneered, but there’s a lack of education about how rock was also pioneered and helped to move forward by artists like Sister Rosetta Tharpe. The genre was carried by a lot of white men, but a lot of the POC artists got lost along the way.”

Featuring artists including Big Joanie, Connie Constance, Ho99o9, Little Simz, Young Fathers and many more. This new compilation is a continuation of the ‘Voices for The Unheard’ project created in June 2020 by Nova Twins.

Through their efforts, Nova Twins said that they hoped to help would-be POC alternative artists feel “seen”, while continuing to push for greater equality in the rock and indie world.

The tracklist for Nova Twins presents ‘Voices For The Unheard’ is below.

The OBGMs – ‘All My Friends’

Pussycat and The Dirty Johnsons – ‘Ain’t No Pussy’

To celebrate the vinyl launch, Nova Twins sat down with Big Joanie, Connie Constance, LoatheandDeath Tour for an exclusive live-streamed conversation centred on their experiences as emerging POC artists via the Dr Martens Instagram channel. You can watch the conversation here.

READ MORE: Punk’s lack of diversity is at odds with its spirit – and it’s time for evolution