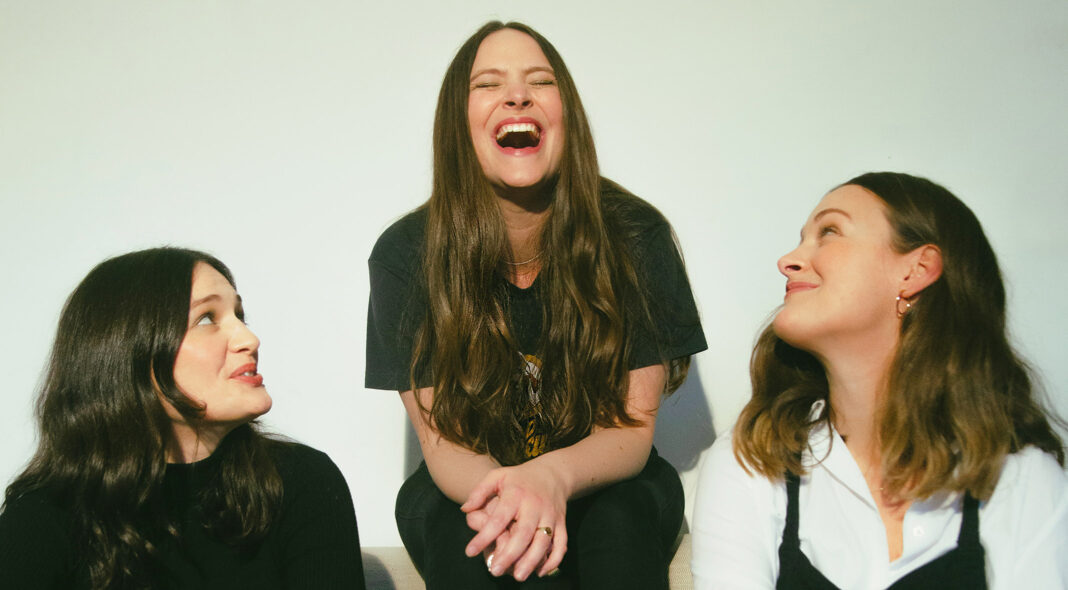 For musicians, the only thing stranger than not playing shows is playing shows to no one. The Staves are days away from their first live gig in a year and though fans will be sadly yet safely tucked behind computer screens rather than at London’s Lafayette, the Staveley-Taylor sisters – Jess, Millie and Emily – are still excited to dust the cobwebs off their guitars and three-part harmonies, and celebrate the release of new album, ‘Good Woman.’ The record, finished in 2019, still has an air of the theoretical: “usually if you had an album coming out, you’d be on tour, getting to know the songs so intimately by playing them live,” but a live stream is “definitely better than not doing it!” Jess is quick to point out. As for Millie, the side effects of a brief return to normality have dawned on her: “Fuck! I’m gonna have to put on actual trousers.”

The sisters are separated – Jess in comfy knitwear and Millie with Moomin mug in hand – but they still sync up perfectly over Zoom; intermittently switching from Watford to Valley girl and exchanging sibling banter, as Millie gently ribs Jess for recommending Dawson’s Creek with the caveat that the ending isn’t great – “it doesn’t get shit, Jess. It just is shit”.

There is one piece temporarily missing: eldest sister Emily, who took a step back from touring with the band after becoming a mum in 2019. Lockdown has prevented them from seeing enough of Emily’s daughter – Margo aka Baby Maggie – to whip her into shape, but Millie reckons she’s showing promise as a potential fourth member: “We used to sing around her and she’d get wide eyed – just surrounded by sound. Then she’d start gurgling and try to hold a note along with us.”

It’s easy to imagine how Baby Maggie feels in the company of those voices. The Staves’ trademark familial harmonies are a simple concept executed with sublime charm and skill. Even though there are plenty of moments on ‘Good Woman’ that share the intimacy of debut ‘Dead & Born & Grown’ or the subtle majesty of 2015’s ‘If I Was’, so much has changed for the trio, both personally and musically, in the meantime. The Staves lost their mum suddenly in the summer of 2018 and soon after, Millie returned to the UK following a gnarly break-up. Their subsequent hiatus from music means that ‘Good Woman’ is particularly poignant, as a record that bears a different, messier kind of truth and a bolder sound to lift it up: “We wanted to properly commit to every sonic decision.”

They’ve fully embraced synths, too. ‘Devotion’ grooves like a slice of 80s pop but when the toe-tapping stops, you’re left wondering why you’re sorrow-scrolling through Instagram and questioning your own attachments. “I quite like tricksy songs like that,” Millie laughs. “How sweet. Life in the backseat,” she sings, a sweet that abruptly turns sour, reflecting on a relationship where she was buckled into the passenger seat without realising it. “You’re constantly having to shift to fit other people’s shape. Frustrated at people who make you feel like that but also frustrated at yourself for letting it happen.” She wonders how much of that stems from being the youngest of three: “I think there’s always a bit of a baby badge you put on yourself for the rest of your life.”

If Millie feels the weight of that baby badge, it doesn’t show: the tracks she takes the lead on might be the most defiant The Staves have ever sounded. That fire is there in ‘Careful, Kid’, which sees Millie scorch her “five year rebound” with the heavy drum-backed grit of Comeback Kid herself, Sharon Van Etten. It’s no coincidence, then, that The Staves worked on the album alongside John Congleton – Van Etten’s producer on 2019’s ‘Remind Me Tomorrow.’ There were also recording sessions at Long Pond, Aaron Dessner’s studio that is steeped in folklore for a certain pop heavyweight: “Funnily enough, I remember working on ‘Next Year, Next Time’ there and the engineer said “this could be quite poppy – like Lorde or Taylor Swift” and then obviously, Taylor ended up going to that studio as well,” Jess chuckles.

Congleton became the band’s cheerleader when they needed one most, recognising the voices beyond those harmonies: “No one had ever really said “I think you have something to say” to us before. It’s usually “I like your voices and I’d like to record them.” Which is lovely and flattering but…” Millie trails off.

Because it shouldn’t be news that The Staves have something to say. They tried to stave off any association with twee, folk girls as early as possible, with a casual “fare thee well, I don’t give a fuck” on their debut LP. With an album title like ‘Good Woman’, however, they’re tackling “ingrained ideas of womanhood” head on.

“Women get held to an incredibly high standard of behaviour,” Millie begins. “All these conflicting ideas of being tender but also strong and being a caregiver, but not having many needs from other people because then you’re demanding. And it’s like, ‘No! you’re just trying to be a fucking human, aren’t you?’ without all this mindless chatter being thrown at you. A lot of fucking shit to unpick!” – she pauses to laugh – “is what I think…”

Outside of their music, they’ve ventured into podcasting where they are silly and considered in equal measure. Their current pod, ‘Dial A Stave’, is three sisters shooting the shit throughout lockdown – a vicarious joy for anyone missing family and friends. Previously, Spotify gave them free rein for the ‘In Residence’ podcast and the result was an absurdly enjoyable listen; where wise reflection on musical influences meets a whirlwind of in-jokes. Alas, pursestrings got tightened and it wasn’t renewed: “We really enjoyed doing that podcast and no one’s heard it. Hound Spotify about it, mate! Get a hashtag going.”

The trio’s sense of humour always comes through in their music, but this record is also their most touching and vulnerable. They didn’t start with an album title in mind, but when considering the circular notion of sisterhood, losing a mother, and Emily becoming one herself, “It just had to be called Good Woman.” Losing their beloved mum, the “Best Woman” as Jess calls her, made them realise how much they had in common with people through collective grief.

Jess wrote ‘Sparks’, the dreamlike ode to their mum, in a “muddled stream of consciousness.” Reflecting on that process reminds her of songs she’d previously neglected: “Things hit you in such a different way once you’ve been through grief. It’s the same when you’re in love: suddenly all the love songs actually mean something.” She couldn’t bear to listen to music for a while because “everything reminded me of her” but did eventually return to one album: Sufjan Stevens’ ‘Carrie & Lowell’: “It’s a masterpiece. I don’t think you can write that two months after.” Written in the wake of Sufjan’s mother’s passing, the track ‘Should Have Known Better’ ends with a sentiment that must now resonate with the sisters: “My brother had a daughter / The beauty that she brings, illumination.”

“I don’t really know how we got through it,” Jess says. “There wasn’t a plan or mission. When I thought that I couldn’t do anything ever again, I’ve slowly realised that I am kind of functioning again.”

‘Good Woman’ is the sound of functioning again; the sound of the sisters finding their way back. They’ve been hungry to get the record out, which has been waiting in the wings for some time: “When something is there, either finished or unfinished, it feels like this weight that is hanging. It’s going to feel really nice to close that chapter and release it into the wild.” It’s on their terms now.