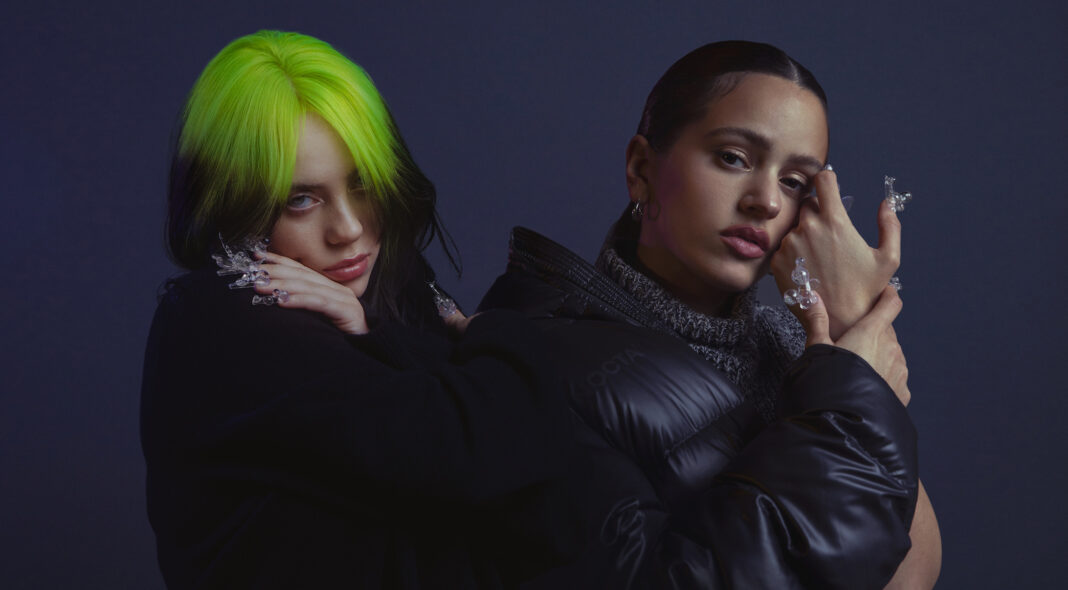 Billie Eilish teaming up with Rosalía is a pairing that makes abundant sense but one that’s taken years to see the light of day. ‘Lo Vas a Olvidar’ – ‘Will You Forget It? in English – is a muted and eerie track written back in the heady days of 2019, and it sees both artists singing in Spanish and English. Eilish’s brother FINNEAS is on production duties once more, opting for reverb and autotune, and what the song lacks in terms of instrumentation, it makes up for with rich, evocative vocals begging for forgiveness. “Can you let it go?” they sing in anguished harmony and if it sounds like it could score the Gen Z version of Skins, that’s deliberate: the track is due to appear in the January 24 special episode of HBO’s Euphoria.

Breaking up is hard to do, even if you were the one to do it. With ‘rubberband’, Tate McRae takes the sting of heartbreak literally: woven amongst the bone-deep synths and a beat that snaps abruptly like a rubberband against your wrist, is the guilt and longing and pain you feel when you’re protecting someone else. There are twinges of regret for letting someone go – “Never knew what I had until I lost it” – but McRae never lets herself fully indulge. She pushes it down, “trying to forget, trying to forget”. For the Canadian singer-songwriter, whose first break came as a finalist on So You Think You Can Dance aged only 13, this new track has the potential to be as big as last year’s melancholic mega-hit, ‘you broke me first’. This particular brand of emotionally-charged synth pop is evocative of the likes of Hayley Kiyoko or Tove Lo; in fact, ‘rubberband’ and its unbelievably catchy hook could easily double as the sister track of ‘Habits (Stay High)’ – “Gotta stay high, all my life, to forget I’m missing you.”

‘Devotion’ is the last in a series of teasers for the Staves’ long-awaited new record, ‘Good Woman’ – their first fully-fledged album since 2015. The sister trio began with ‘Dead & Born & Grown’ and soft folk melodies, but their music of recent years has taken on a rockier and richer feel. ‘Devotion’ is no exception. What starts with single piano chords, finger clicks and a solo vocal from youngest sister Camilla, soon builds into something new entirely, with a chorus reminiscent of Don Henley’s ‘The Boys of Summer’: a driving drumbeat, pulsing synths and the soulful, familial harmonies at the heart of the band. Devotion is a romantic concept – being carried home, enjoying an untroubled life in the backseat (“how sweet”) – but like most concepts, the reality has a harder edge. “I could blow the fucking windows out” sings Camilla sweetly, with barely concealed frustration over her lack of control and as the track fades out, the band is still pondering if this all-consuming care “will be the death of [them].”

Rachel Chinouriri’s beautiful 2018 breakthrough, ‘So My Darling’ feels lightyears away from her latest release. On ‘Darker Place’, the Croydon singer-songwriter uses her distinctive, versatile vocals to take on the role of a chameleon, flexing between sweet sentiments “Come and tell me all your secrets“ and subsequent gut punches, “then I’ll prey on your weakness“. At a tight two minutes 49 seconds, the track slips into a darkly seductive groove quickly and comfortably, dripping in charisma and a sense of imminent danger: “I’ll be your karma.” Chinouriri brilliantly twists the prospect of getting over someone and takes it to a darker place – “Maybe I will let you go” – and whether they deserve it, is up to you to decide.

Aussie producer and DJ Samatha Poulter – aka Logic1000 – is fresh off the back of a number of high-profile remixes in 2020, including Caribou and Christine and the Queens’ ‘La vita nuova’. With ‘Like My Way’, the opener to her new EP ‘You’ve Got The Whole Night To Go’, Logic1000 sets the scene of an early hours kitchen rager. She layers jittery hi-hats and vocal loops that gently ebb and flow over a steady kick to create a stirring yet easygoing throwback house track.