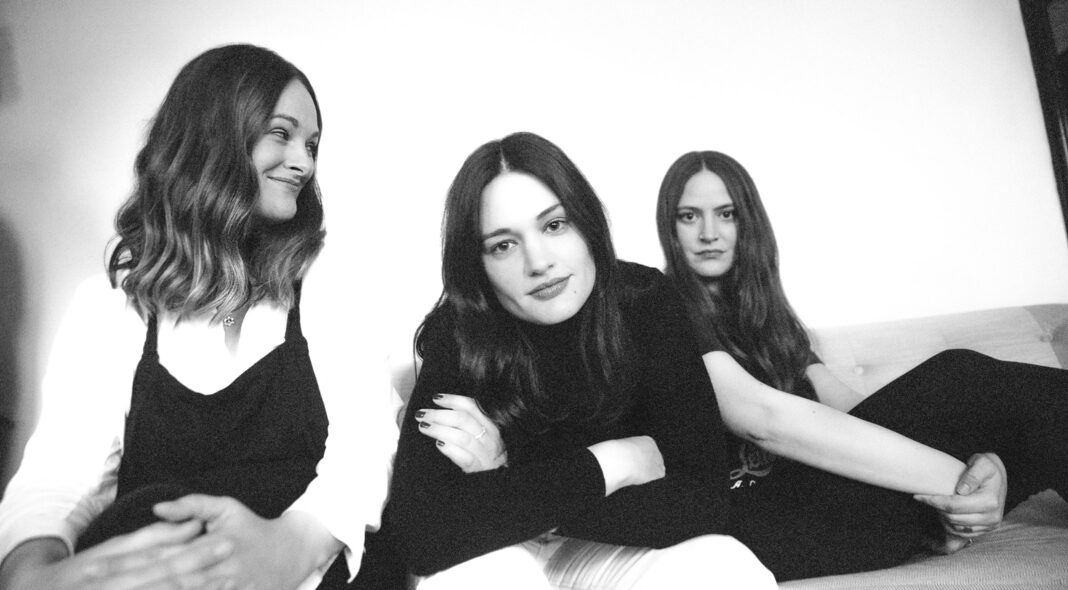 “I’m in my room and that’s all there is.” It’s hard not to give a wry chuckle upon hearing the final line of ‘Trying’, the first single from The Staves’ new record, ‘Good Woman’. Though it was written and recorded in 2019 – before any of us knew our rooms as painfully well as we do now – much of this album speaks to overcoming a similar kind of paralysis. The three Watford-born sisters – Jess, Camilla, and Emily – have collectively experienced a lifetime in a few years: the heartbreaking loss of their mother, an arduous breakup, transatlantic homesickness and finally, light in the form of Emily’s newborn. There have been audacious singles (‘Tired as Fuck’), collaborations with orchestral ensemble, yMusic, and even pun-fuelled Christmas songs, but ‘Good Woman’ marks the band’s first album since 2015’s ‘If I Was’. The Staveley-Taylors have come a long way since that wintry Wisconsin soundscape but upon meeting them again – their signature harmonies still intact but now bolstered by tenacity – it’s clear they suit their new home.

The three worked closely with prolific indie producer John Congleton (Sharon van Etten, St. Vincent) to hone their new sound and “properly commit to every sonic decision,” and nowhere is that clearer than on ‘Careful Kid’, with its heavily distorted guitar growl, stadium-ready drums and 80s synths. This boisterous side of The Staves harkens back to their bluesy swagger on 2015’s ‘Black & White’ and it’s there in the lyrics, too: ‘Failure’ is an irreverent inventory of faux apologies – “I’m sorry if I pissed on your party and…if all of us really killed your vibe” – and latest single ‘Devotion’ bops with frustration: “I could blow those fucking windows out.”

Tempting as it is to reduce the three mellifluous voices to sweetness and innocence, The Staves are having none of it. The title track recognises how that perceived contradiction manifests itself in their lives and their music: ‘Good Woman’ is the product of a society unable to deal with female power and “rage, uncontained”; a discerning exploration of how narrow understandings of womanhood like “Surrender is sweet / Forgiveness divine” can snowball and suffocate.

The ballsy opening to the record allows you to be more attentive with its softer moments, which unfurl in the space left behind. ‘Sparks’ is more than a tearjerker for anyone who’s lost someone and anyone who has yet to: it’s a tender portrait of grief, rendered so vividly by people still in the throes of it. “I don’t talk, I can’t sing” comes the refrain, but it’s the understated image of “I can hear your keys in the door” that lingers. Grief dominates during the big moments – how could it not? – but it might just have more power to eviscerate in the everyday, with a phantom key in the door, a missing car in the driveway, an empty kitchen.

As their intricate harmonies soar to fill invisible cathedral ceilings, ‘Sparks’ takes on a hymnal quality. A similar magic is on display in ‘Next Year, Next Time’: when the anthemic bridge hits and the three sisters belt “we’re gonna sit, sit tight and maybe we can get it right” over the soft howl of the wind, it’s the sound of company and the open road and it feels nothing short of holy. What sets The Staves’ harmonies apart is more than mere family resemblance: it’s their inherent camaraderie, the considered way their vocals overlap and converge at just the right moment. When a quietly desperate Camilla strums a ukulele alone on ‘Paralysed’ and speaks of “being left behind” in a crumbling relationship, the track shifts to bring Jess and Emily back in earnest. “Don’t snuff me out. I used to be magic,” the three sing in unison, sisters rallying around one another to find themselves again.

For a band who have always possessed a subtle power and defiant streak, ‘Good Woman’ is a particular testament to resilience and the surprising strength found in the wake of heartbreak, motherhood and bone-deep grief. What does it mean to be a good woman? What does it even mean to be a good person? Such questions are unanswerable but nonetheless weigh heavy during an anxious and reflective time for us all. What a relief to know that sometimes, it can be enough to simply speak it into existence and with the defiant and collective cry of “I’m a good woman,” there’s a spark that can’t be snuffed out.

‘Good Woman’ is out February 5. The band will play a ticketed live-stream performance from London’s Lafayette on the same date. Tickets via Dice.fm

Nao – ‘And Then Life Was Beautiful’ review: a lush, confident reset for one of Britain’s most distinctive voices