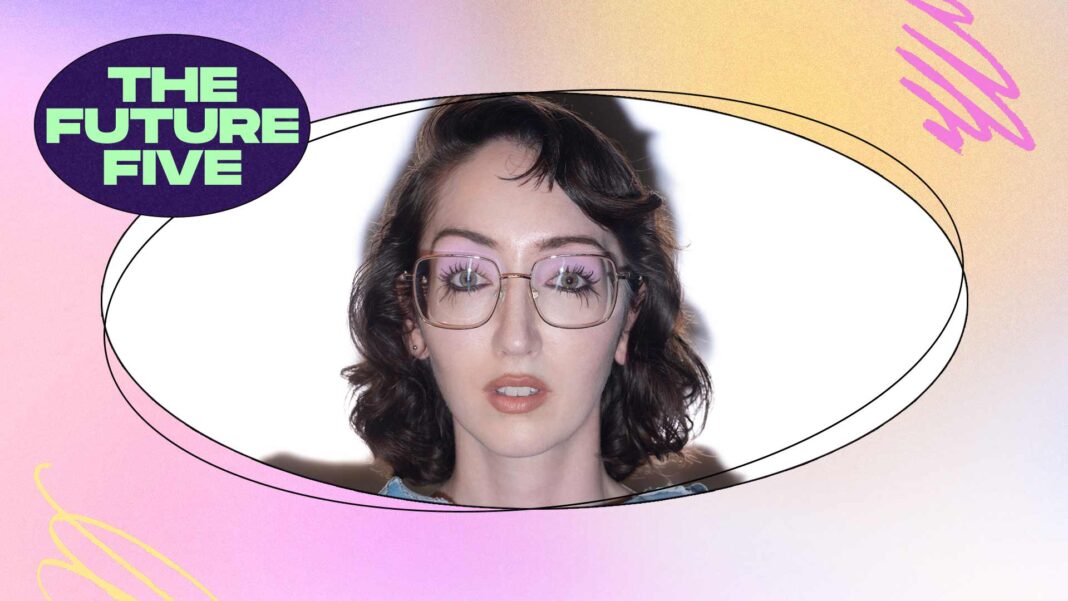 We’ve had our eyes on Jessica Winter since she released her debut EP, ‘Sad Music’, back in 2020. Her gothy blend of synth-pop sad bangers had us longing for a (then locked-down) dancefloor. Two years on, she’s got a new EP on the way, ‘Limerance’, due on February 10, and she’s about to head out on tour with Miss Rebecca Black. With an album also in the works, 2023 is shaping up rather nicely for Jessica Winter. We pinned her down to find out more.

You grew up on Hayling Island off the coast of Portsmouth. What was it like growing up there as a young person who was interested in music?

I secretly joined churches because I just needed to be in a choir. My mum and dad were so anti-religion, if they found out, they’d pull me out, so I was this desperate churchgoer! You get the opposite story normally, but I joined the choir when I was about 10. It was at the end of my road so I’d sneak along to sing.

Portsmouth has a bit more of a thriving gig scene – do you remember the first shows you saw there?

My uncle is in a punk band called Archive 45, who are famous in Portsmouth, so apart from his gigs, the first I bought a ticket to was the Spineshank, Chimaira and Il Niño tour. They’re heavy metal bands and it was at the Pyramid which is this huge venue – to me then, it was like an arena. I went with my friends. We were all grungers.

You’ve worked with Lynks on your new track, ‘Clutter’. Why did that collaboration make sense?

It was a natural progression because we’ve been constantly fanning over each other for ages. One minute I’d put a song out and he’d play it on his Radio 6 show, then I’d book him to play a night that I run called Hate The House. This time last year, we went on tour with each other and then I had this song ‘Clutter’ which had a verse open because I just felt like it needed something else. I sent it to Lynks and said: ‘Do you want to hop on this’ and he said yes!

The last time you spoke to The Forty-Five, back in 2020, you were all about the sad banger. The tracks you’re releasing now have a more empowering spirit – still bangers, less sad. Are we entering a new era of your music?

That’s really encouraging to hear that because maybe that means I’m mentally, getting better? I’ve definitely had a few revelations over the last few years. I’ve been in lots of different headspaces that I’ve not been in before so I would hope that all my songs aren’t going to be sad bangers. In your late teens and early 20s, your mind opens up at different times. I think I’m in that next stage: I’ve had another fishbowl moment where you take the bowl off and you can actually see things way more clearly than you have before. I can look at myself from a different perspective now. I never understood why I was ending up in quite traumatic relationship patterns and it’s only with a lot of digging deep with therapy, that I’ve had some huge revelations. I think it’s going to help me be a bit more balanced in the world.

You work with a lot of other artists (Jazmin Bean, Phoebe Green, The Big Moon) as a songwriter as well as being an artist in your own right. The Big Moon’s Jules credits you for helping her to get over writer’s block after the birth of her baby. Tell us about the experience of working on ‘Wide Eyes’ with her.

I’d heard through the grapevine that she’d had a baby but she didn’t actually tell me until the day. It was so exciting for me to be able to try and think up a song of what it would feel like to have a baby. It’s such an alien concept and I don’t know if I ever want to do it myself, so I just think it’s so exciting to think about how that would feel when you don’t know what they’ll turn out like or if you’ll like them! So because I was just like ‘Wow’, it happened so easily. We literally wrote that in four hours, because she had to get back and feed the baby!

You’ve been in the music industry for close to a decade. What are some changes you’ve noticed over that time?

I do feel like algorithms have ruined a lot of individuality. We’re in an individualistic age but the algorithm is creating a format and a system that everyone must follow in order to be seen and heard. It’s ruining the mystery and the magic of music because you have to be a constant content provider. Sometimes songs can take months and months but now because we’re in a technological age, you can’t really do that. But it is what it is. We just have to accept it.

What are you most excited about in 2023?

I’m going to [Texan new music festival] South by Southwest for the first time. It will be my first gig in the USA. I can’t wait. And then after that I’ll be going to LA to finish off doing some writing and recording for the album. I think it will be released towards the end of this year. It’s a really exciting time. I’m getting so many amazing opportunities which I’ve not had before. I’m particularly excited to play with Rebecca Black in Heaven on Friday. We haven’t spoken much yet. I was in LA working last year and went to a Dorian Electra show. Rebecca was there and we were all just hanging out. We didn’t really talk or anything but then she came through with the tour support, so I don’t know if I maybe impressed her with a dance move or something.

Finally, what’s one thing you want people to know about Jessica Winter?

That I will be continuously singing from the heart.

READ MORE: See the rest of the artists in this year’s Future Five as they’re revealed