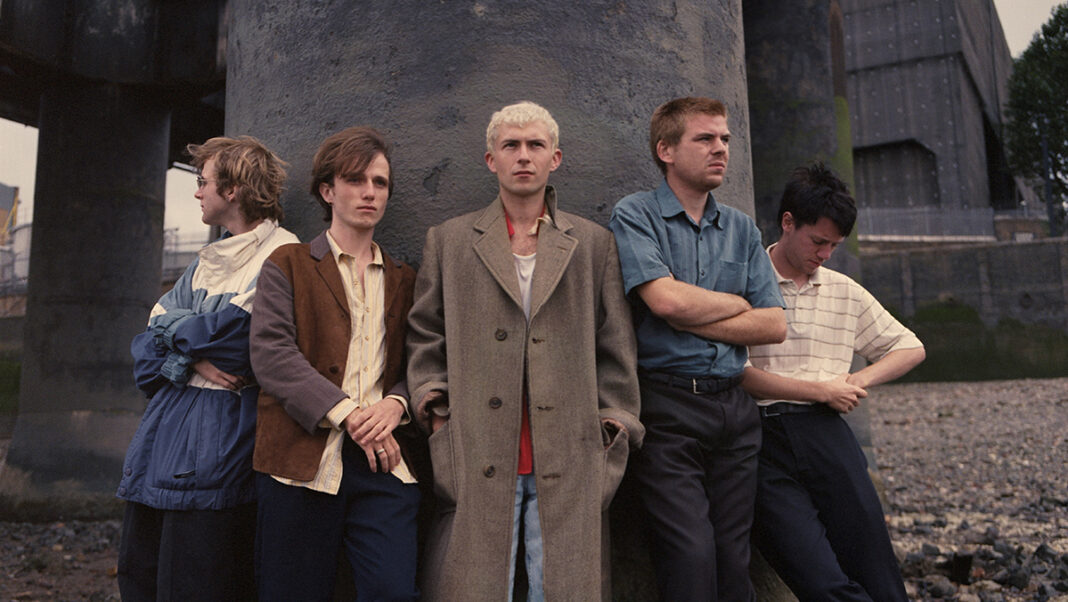 It might be named after the precise shade of pink proven by psychologists to reduce violent or aggressive behaviour, but Shame’s second studio album is every bit as incendiary as their 2018 debut, ‘Songs Of Praise’. Recorded last February with Arctic Monkeys-producer James Ford, ‘Drunk Tank Pink’ finds the South London five-piece capturing the claustrophobic spirit of our times, setting ruminations on isolation and economic struggle to a frenetic, often densely-layered strain of monochrome post-punk.

We caught up with frontman Charlie Steen and drummer Charlie Forbes to hear how touring fatigue, identity crises and time in a former-mental hospital helped inspire their latest LP.

You were trying out material for ‘Drunk Tank Pink’ when you played The Forum at the end of 2018. Just how long was this album in the making?

Steen: So when you saw us, we went onto our European tour, took a break after Christmas, and then we got back to writing in February. But it was a different experience this time round. When we were writing ‘Songs Of Praise’, we had our base of the Queen’s Head [in Brixton] or Dropout Studios in Camberwell, but both those places had gone so it took us quite a while to find a place. It didn’t really click until we went up to Dewar Farm in the Highlands of Scotland in the April of 2019, and worked with Acid Dad.

Who is Acid Dad?

Steen: So we’ve got a connection through the artist Makeness – his dad is Acid Dad and he runs the studio with his partner, Gail. We went up there thinking it was going to be a quiet writing retreat outside of London, and then it turned out to be quite heavy. (Laughs) But it was fucking fun. I think throughout the large majority of the writing we’ve done as a band, we’ve always been around interesting characters who might have an effect of coming in and saying it’s shit, or…

Forbes: Joining in on the bagpipes or something.

And you worked with [renowned indie record producer] James Ford, too. How was that?

Steen: Yeah we did a demo of ‘Water In The Well’ with James Ford in August, and went to La Frette Studios in Paris the next January to work with him. He’s an incredible musician and really fucking hard working. He just had this attitude of a trier. There are times when you will bicker in the studio about wanting to try a part through a different amp and then somebody will be like, ‘No, it won’t sound good,’ and James was just like, ‘Let’s do it, do it.’

Forbes: We’re really good at bickering about really pointless shit for really extravagant amounts of time, so that was nice.

What inspired the choice of album title?

Steen: So when we finished touring I moved into this old nursing home, in Peckham. The deal was if I could make the laundry into a liveable space then I could stay there, so we did the room up and I just painted it all drunk tank pink. Ceiling, wall, carpet, lampshade. It was a space that felt quite foreign and intimidating in the initial period, and I wrote a lot of the lyrics for this record there, which is why a lot of themes revolve around the bedroom. Because that time where you’re in bed going to sleep can be quite a brutal period of the day. It’s definitely the most honest part of the day, because you’re reflecting on everything alone.

Thematically, it does feel like a particularly anxious record. Is that purely fuelled by personal circumstances, or did social issues have an impact?

Steen: I think it’s [inspired by] the sort of things that would happen in somebody’s life from the age of 19 to 21: heartbreaks and general anxiety and a struggle to work out your own identity. But then when you mix those factors with touring – which is such an absurd lifestyle – it becomes a bit more rooted.

You toured for a long, long time with ‘Songs Of Praise’. How burned out were you by the time you finished?

Steen: Initially you can carry that adrenaline on because there’s the excitement of having a break and seeing all your mates again but, yeah, a lot of this record was about adapting to being on your own again. On tour you can just distract yourself from emotions and realities, and when you come back and you’re on your own then you’re forced to confront them. That’s what I would say this record is mainly about.

This record is different to ‘Songs Of Praise’ in the way it’s all very internal, about my own experiences and my own emotions and thoughts. People might say that’s very narcissistic but it was all that I could write about in that time. And, in honesty, it was a hard challenge singing these very personal things in front of four other band members who know your entire context. It was a very cathartic experience

Your early 20s are always a bit of a struggle as you work out your identity, but it does feel like this generation has it particularly bad.

Forbes: Young people have it fucking hard these days.

Steen: It is fucking tough. It’s constant. It’s so hard to find space. There are a lot of people feeling really depressed, feeling like it is such a struggle to live in this fucking city. Fucking hell, imagine what the history books are going to be like about the last 10 years for our generation: Brexit, Corona, the Tories… (Laughs) There’s going to be a lot of think-pieces.

Shame famously came up playing independent venues. With many of these now under threat do you worry that there might not be those opportunities for the next wave of bands?

Steen: It’s not worth coming out of this if there aren’t independent venues. What’s the fucking point, if nobody can create anything here? We wouldn’t be anywhere without venues like The Windmill. Because nobody’s first gig is at Brixton Academy, or at Alexandra Palace.

Forbes:  It’s not even just musicians. [If these venues close] Not only do you lose the stages for small bands to play on and the spaces for bands to form, you lose the community spaces for  people that are integral to supporting what we do – the artists, directors, fashion people, other creatives. You just lose that sense of community, and a place to meet like-minded people. It’s fucking brutal.

Having been forced to confront yourselves as individuals in the making of this album, are you in a better place now mentally?

Steen: I think maybe we’re more equipped to deal with certain things. Obviously this year has been so hard for so many people. It’s broken them. So it’s been about knowing what’s going to get you down and doing what you can to avoid that. And that’s not repressing things, it’s focusing on the positives. Even to be able to have this album, there are so many ways that we are so fortunate and we are grateful.

Forbes: Especially when you know there’s nothing that can be done and that everybody’s in the same boat. You’ve just got to cross your fingers and hope that at some point things will go back to normal and this will just be a horrible collective nightmare. One of the saddest things personally about the pandemic happening when it happened is that we never got to play any of these songs live before the album, and to build that kind of anticipation from the fans. So we’re just eager to get out there and fucking play it, man.

We can already imagine how good a song like ‘Station Wagon’ is going to sound live.

Steen: I think we’re all in agreement that ‘Station Wagon’ might be the hardest one to do. (Laughs) But I think that might be my favourite one off the record. It’s got the ode to Elton John in it.

An ode to Elton John?

Steen: There’s this story where he was really cracked up and he ran outside onto a balcony and told his P.A. to “Move that cloud.” Like, the furthest way to possibly heighten your ego is not only to think you control the weather but that your personal assistant can do it for you. (Laughs) It became this joke with me and Sean for ages: we’d come out of the practise space and be like, “Move that cloud.” So yeah, the end bit is about Elton John. I feel like that guy has definitely moved a few clouds in his time.

‘Drunk Tank Pink’ by Shame is out on Friday.