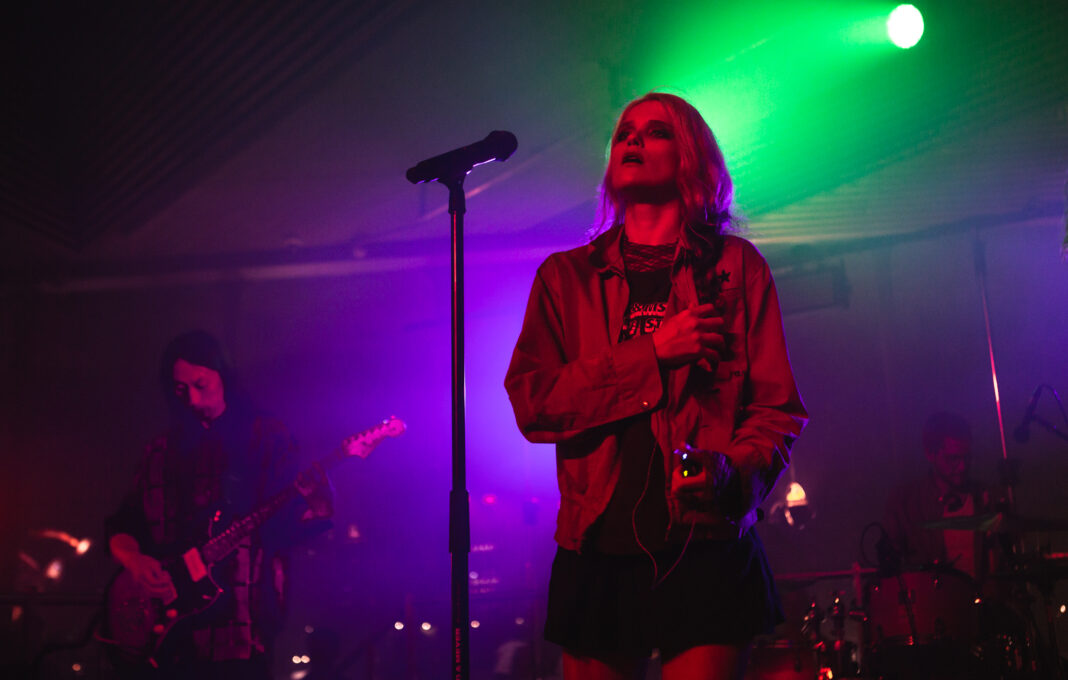 Sky Ferreira is 55 minutes late. We’re left waiting beneath neon geometric lights that glow like a Tumblr grid in Southbank’s Queen Elizabeth Hall. But any long-time Ferreira fan knows that waiting is par for the course. The wait for her second album has dragged on for so long that it’s become a meme – one 2021 tweet reads, “’Once COVID is over’ is starting to sound like ‘when Sky Ferreira releases new music.’” The elusive LA pop star hasn’t released an album in nine years. Her second record, Masochism, was initially slated for 2015. Ferreira has said it’s “actually coming out this year”, but fans aren’t holding their breath. For now, a new single and live show will have to do. Last night, as part of the Grace Jones-curated Meltdown Festival, Ferreira played her first London gig since 2014 and her longest set since 2017.

For many, this is the first chance they’ve had to see her. Pleated tennis skirts, black bodycon dresses and The 1975 T-shirts peak out from the crowd. The nostalgia is inescapable, but there’s also a palpable hunger to (finally!) hear some new music. We sway in the heat as we wait. It’s like being subjected to the sweat of the kind of indie sleaze club nights that Ferreira would frequent – most people have already gone back and forth from the bar at least twice before she comes on. But it’s worth the wait.

Just before midnight she sweeps onto the stage immediately breaking into ’24 Hours’ and it’s clear no one wants the night to ever end. The pulsating beat of ‘Boys’ swiftly follows and the crowd screams along – “boyyyysss they just make me mad.” Shifting her iconic mane of bleach blonde hair from side to side, she launches into new single ‘Don’t Forget’, the raging, bitter, anti-forgiveness bop that could be directed at any of her many detractors. It proves that her anthemic sing-alongs aren’t just reserved for her older music. There’s as much excitement for this track as any other. “I don’t need to deceive you, I’m a real bad girl,” she purrs into the mic.

We hear another new song called ‘Innocent Kind’, a bellowing rock track with a serious Courtney Love vibe. The two have drawn comparisons before. Ferreira’s Insta bio, “a walking study in demonology”, is a line from Hole’s ‘Celebrity Skin’. On stage, she commands this bad girl persona, remaining aloof while radiating that indefinable cool that made her one of the last great ‘it’ girls. Some verses are mumbled. She hardly speaks but seduces with each song. On record, Ferreira’s voice is smooth and primed for pop. Onstage she breaks free with tracks like ‘You’re Not The One’ and ‘I Blame Myself’ expressing her vocal range and reflecting all the emotions of bitterness and regret explored in these tracks. In the electric atmosphere, songs about self-loathing become celebrations, or at least about looking back with a knowing wink and a nod. Ferreira was barely 21 when her first and only album ‘Night Time, My Time’ was released. As she turns 30 next month this gig feels like a retrospective, looking back over her 20s while acknowledging all the happy and sad memories that fans attach to her songs.

The later it gets, the more it feels like some kind of secret event that could go on all night. “I can’t believe this is actually happening!” someone screams. “I don’t care that it’s 1am and I’d usually rather be in bed.” Ferreira ends with a euphoric rendition of hit single ‘Everything is Embarrassing’, which reaches feverish new heights in a live setting. A surreal haze hangs over the night. Maybe it’s the heat or the way the neon lights bounce off the fog. Maybe it’s when you’ve imagined a moment for so long that when it actually happens it doesn’t seem real.

It’s clear from last night that Ferreira has a primed fanbase that is ready and waiting no matter how long they have to wait. And she proved she’s still worth the wait with an astounding set that was worth staying up for. Crawling out into the humid night air just after 1am, it felt like teenage dreams has been realised. Now we can only wait, patiently, for the new album to arrive and pray that it won’t be another eight years before her next UK gig.