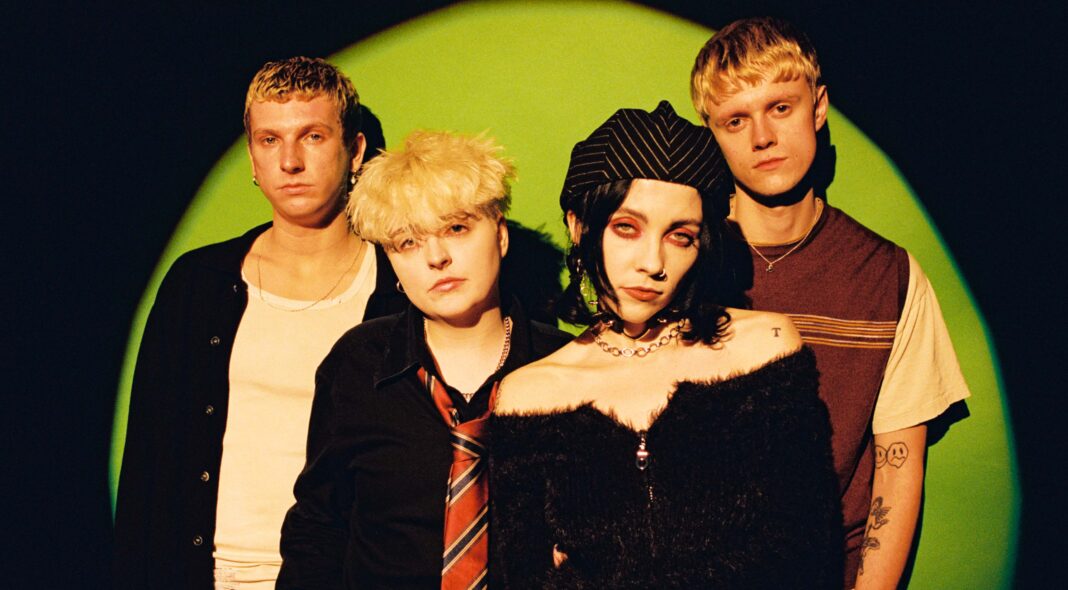 It’s difficult to separate ‘Who Am I?’, the second album from Pale Waves, from the several pockets of trauma that the Manchester quartet has endured in recent years. In February 2020, while touring across Europe as the support act for Halsey, their tour bus was involved in a near-fatal crash. The three band members on board (drummer Ciara Doran, guitarist Hugo Silvani, and bassist Charlie Woods) survived, unharmed – but it was a pivotal moment, one that forced the group to survey the damage of a largely distressing year. “It changed everything,” Doran recently told us. “The bus crash was a big wake up call for me.”

Prior to the horrific accident, the band had long suffered from fatigue-induced burnout, relationship issues, and creative difficulties (as a result, lead vocalist Heather Baron-Gracie turned to writing songs alone), though it seems that they aren’t cagey about the life-altering experiences that shaped ‘Who Am I?’. The record overflows with tears and emotional turmoil, but Pale Waves’ ability to blend their shared pain with the immediacy of a pluckier and brighter sound makes it a thing of casual wonder.

As they move away from the black heart emoji anthems of their loved-up 2018 debut ‘My Mind Makes Noises’, there is a striking sense of vulnerability at every turn here – these are staggering songs. Take the warm and curious ‘She’s My Religion’, which works like a ‘90s coming-of-age soundtrack with its intimate songwriting and jaunty pops of distortion. It sees Baron-Gracie use she/her pronouns when singing of a romantic pursuit – a first in the band’s history – as she unloads a barrage of heart-lifting lines: “But she helped me find a different kinda love/Made me feel like I was finally enough”.

The early singles also rank among some of the band’s best. The brooding ‘Change’, with its knockout chorus, examines the cruel reality of heartbreak, and absorbs all the best bits of Avril Lavigne’s perfectly bratty ‘Let Go’ era via a winning combination of quiet-loud dynamics and Doran’s sputtering drums. And then there’s ‘Easy’, while sonically not too dissimilar from the former, bounces pleasantly along; it’s safe and reliable.

Things are not always so comfortable, though. The weighty and brutally honest themes of ‘Who Am I?’ are felt far deeper elsewhere, as Baron-Gracie uses the rest of the album to continue the overarching autobiographical streak. “I thought I wanted fame/I thought I wanted money”, she laments on ‘I Just Needed You’, rarely diverging from the most straightforward expressions of her darker emotions. Her affecting, quavery vocals wrangle with sluggish pacing, a frustrating mismatch that’s repeated on the ponderous and searching ‘Tomorrow’.

These tracks might not be completely flawless, but their simple depictions of unrelenting hardship possess the ability to stay with you. Baron-Gracie’s voice sounds stronger than ever on ‘You Don’t Own Me’, a cutting takedown of the rampant misogyny that still exists within the music industry, from which she has suffered as the frontwoman of a popular band. It’s moments like this that make ‘Who Am I?’ frequently brilliant, but musically, you wish that they would start to push against their own boundaries; the hooks aren’t quite strong enough to be as unsatisfying and repetitive as they are.

But it can be a fine line, and as Pale Waves’ aspirations to follow in the footsteps of their alt-pop heroes become more overt – the scuzzed-up melodies of Alanis Morissette are heard in ‘Run To’ – you can only feel as though their hearts are clearly in the right place. ‘Who Am I?’ is an often thoughtful and moving listen, one that displays a band finding some much-needed comfort in the familiar.

Listen to ‘Who Am I?’ in full, along with commentary from Heather Baron-Gracie in our new Sleeve Notes podcast.