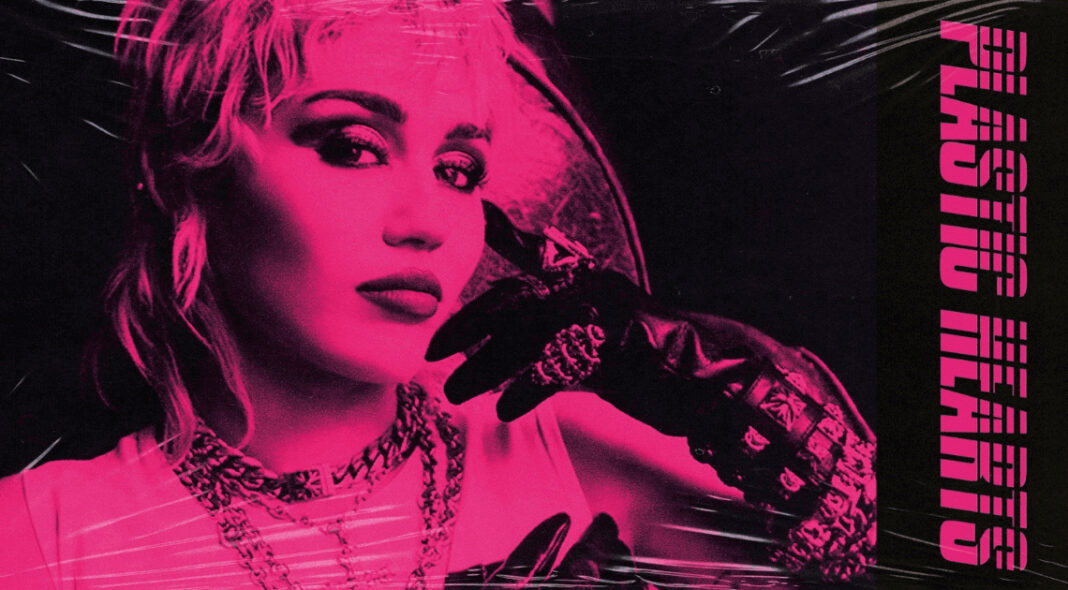 “I was born to run / I don’t belong to anyone,” Miley Cyrus sings on ‘Midnight Sky’, the first single from her seventh album ‘Plastic Hearts’, turning an extremely Springsteen phrase into an extremely Miley phrase. She stamps herself on rock history at every turn of the new record, commanding eighties tropes, making classic hits “uniquely hers”, as Debbie Harry described her ‘Heart Of Glass’ cover, and even writing new songs with her heroes. It’s been a good month for cross-generational collaboration: last week Springsteen rode shotgun on new Bleachers song ‘chinatown’, and now, on Miley’s ‘Plastic Hearts’, Billy Idol, Joan Jett, and Stevie Nicks all come along for the ride.

Some might call Miley a culture vulture, but her appreciation is genuine. She’s covered everyone from Dolly Parton in 2012 to Metallica at her Glastonbury 2019 headline show, trying on Crowded House, Pearl Jam, Hall & Oates, Arctic Monkeys, and Lana Del Rey along the way. Her earlier covers expose the vocal heft heard on ‘Heart Of Glass’ and the Cranberries’ ‘Zombie’ (a pandemic fundraiser for grassroots venues) that appear on the deluxe edition of ‘Plastic Hearts’, as if these older songs can handle her raspy range in a way that modern pop can’t.

Alongside years of hero-worshipping, Miley’s also been mired in controversy and drama, most recently divorce and the loss of her home to the Californian wildfires – but ‘Plastic Hearts’ makes it clear she’s not after your pity. She ditches heartache for anthems of bisexuality, non-monogamy, and self-liberation. “Gimme what I want or I’ll give it to myself,” she demands, later warning that “If you’re looking for faithful, that’ll never be me” on ‘Never Be Me’, one of the album’s slower songs. While the country-inflected ‘High’ feels laboured, ‘Golden G String’ is the winner of these ballad-style tracks, aimed at those who criticise popstars like her rather than pussy-grabbing presidents. “I was tryin’ to own my power / Still I’m tryin’ to work it out / And at least it gives the paper somethin’ they can write about,” she sings, a shot of honesty on a self-acknowledged ‘plastic’ record.

Though top-heavy, with the slower songs falling to the second half, like all the best eighties albums ‘Plastic Hearts’ contains a magic trio, the dark beating heart of the record: ‘Gimme What I Want’, ‘Night Crawling’, ‘Midnight Sky’. And into this spunky nocturnal landscape saunters Billy Idol. ‘Night Crawling’ couldn’t exist without Billy – and the album couldn’t exist without ‘Night Crawling’. The record owes much to his influential blur of punk attitude and pop appeal, and it’s high time he was hoicked out of the Smash Hits annals and given deserved credit. Who better to do that than Miley, who has sported Billy Idol hairstyles, who thinks of his music videos as porn, and who hankers after his androgyny, which even extends to her voice: the entire album is replete with Idol snarls.

On the other end of the scale, despite borrowing heavily from Olivia Newton-John’s ‘Physical’, ‘Prisoner’ – Miley’s duet with Dua Lipa – sticks out as ill-fitting. Miley’s so good at deploying eighties influences that a song with 2020’s biggest popstar struggles to live up to the rest of the album – as if Dua’s only there to balance Billy out with modern credentials.

But ‘Plastic Hearts’ isn’t a rock album, it’s a pop album – a Miley Cyrus pop album. If you’re a mainstream artist longing to go hard for a particular sound, compromise is inevitable, and Miley blends rebellion with pop hooks to satisfy both her artistic desires and her audience. The record falls short of the full aggression held in her gravelly tones, and ‘Night Crawling’ aside, none of the songs live up to her live covers. Yet the retro fits and eighties tropes succeed, steered by her strengths as a popstar. Hungry, imaginative, always seeking to surprise: these traits she shares more with her eighties idols than her peers. Miley Cyrus is never being boring, and that’s the kind of glossy spirit pop should always possess.