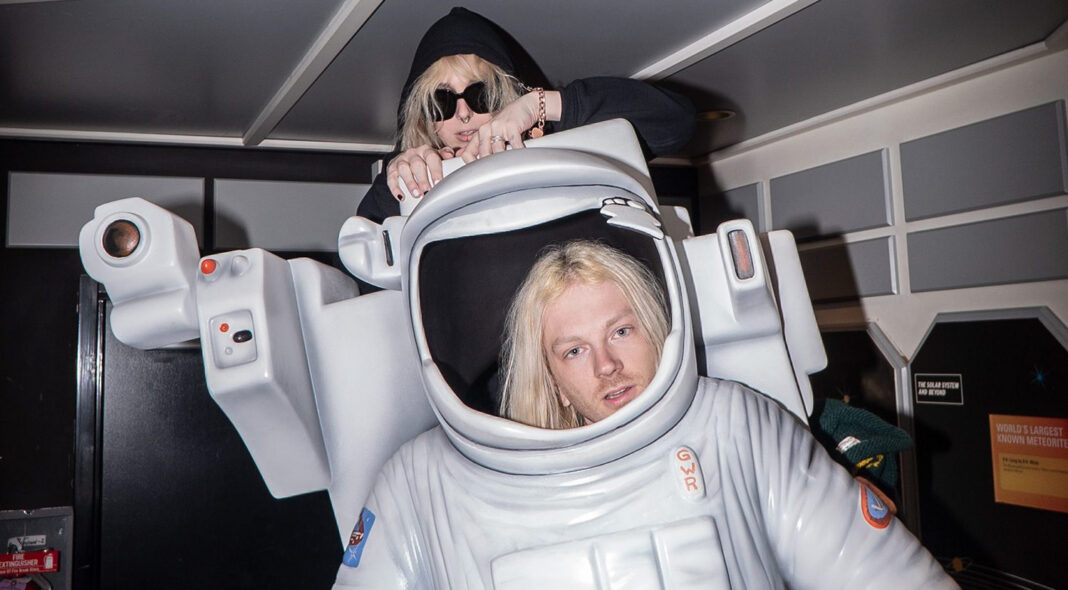 100 gecs have invited their friends round, given them an arsenal of power tools – everything from screamo, glitchcore and bubble-gum pop – doused their debut album, ‘1000 gecs’ in lighter fluid, struck a match, and said, “Do you worst.” But in the true, anarchic spirit of Laura Les and Dylan Brady, the lines between ‘best’ and ‘worst’ are one and the same. Their remix album, ‘100 gecs and the Tree of Clues’ is an intoxicating reimagining of the record that caused the world to have a collective meltdown. Artists (both URL and IRL) have been tempted to commit the ultimate cardinal sin. After all, the devil works hard, but 100 gecs work harder.

These remixes will have you hovering over your playlists, wondering which individual vibe this 19-track album would fit with. While 100 gecs usually laugh in the face of colour-by-number pop, always scrawling out of the lines and making the sky red and the grass blue – just because they thought it would look kinda neat that way – ‘100 gecs and the Tree of Clues’ is, surprisingly, their most palatable output yet.

Like the union of pineapple on pizza, while many would never think of it, 100 gecs and hip-hop do, in fact, belong. Experimental rap ensemble Injury Reserve’s remix of ‘745 Sticky’ show their teeth with their vocals that snarl like a rusty switchblade, switching up their flow and gripping onto your pressure points. It’s a total body slam, proving that you can still score a TKO without needing ear-bleeding bass drops. Lil West and Tony Velour’s reinvention of “gecgecgec” is a trap-meets-dubstep wonder, which, interspliced with a strong rhythmic guitar section, is ridiculously smooth on the ears. (Bet you never thought the word “smooth” and 100 gecs would ever make it onto the same page together.)

100 gecs have a way of resurrecting all your teenage fleeting phases. Enter: Fall Out Boy. The pop-punk progenitors revamped ‘hand crushed by a mallet’. It will blow your mind. Patrick Stump’s livewire vocals, combined with muscular basslines and trashing electric guitars sees the worlds of past, present and future fuse together in holy matrimony.

The only predictable move 100 gecs make is enlisting their pop futurist counterparts PC Music to join in on the fun. A.G Cook, Charli XCX, Hannah Diamond, GFOTY, umru, Tommy Cash, Kero Kero Bonito and Danny L Harle *gasps for breath* have their fingerprints all over ‘100 gecs and the Tree of Clues’. The industrialist grooves of long-time collaborator umru revolutionise ‘ringtone’, and Charli XCX reigns the same track all the way back to the bubble-gum pop scene. Meanwhile, Hannah Diamond and Tommy Cash have their wicked way with “xXXi_wud_nvstøp_ÜXXx” – it will be the only song you want next time you’re ready to let loose on the dance machine.

To their credit, 100gecs have a pay-it-forward mindset. On this remix album, they’re offering a hand up to barely-known producers and artists and pushing them right to the front. You wouldn’t expect it, but the contributions of 99jakes, nothankyou and Ricco Harver are the most fierce of all, in true 100 gecs tradition. 99jakes makes a foray into trance, Ricco Harver puts ‘800db cloud’ through the shredder, and then the hype machine, and nothankyou straight up mutilates ‘xXXi_wud_nvstøp_ÜXXx’ in the best possible way.

But the real treats on this album, they save ‘til last. Patient, dedicated fans are rewarded, finally, with the release of ‘came to my show’ and ‘toothless’. The two tracks have been staples of their live shows and Minecraft Festival setlists, becoming the unicorns of the 100 gecs universe. The two tracks are, perhaps, their most pop-driven; both sugar-coated to make some of the bitter tastes on this album easier to swallow.

‘came to my show’ is a Windows XP twinkling, pop-driven confection, but it’s the Marshmello-sampling ‘toothless’ which is the jewel in their crown. From months of hounding it down, listening to ads on SoundCloud and YouTube just to get to it, fans may miss the pitched-up, blown-out version they’re used to. That drop, which tricks you into thinking you’ve died and seen the light, is somehow a little anticlimactic. It’s not quite the same high you’ve come to love.

But overall, Laura Les said it best in our interview: “I hope people listen to it, and they’re like, ‘This shit is fucking amazing!’ That’s what I want them to say, the first second into it. I want them to be like, ‘Wow, they took the best album ever and they did the best possible things that they could have to it. They got the best possible people, and everything came together, and this is a 10/10 – my favourite album.” Though unfortunately, as Dylan Brady hoped, it is not quite on par with ‘Dark Side of The Moon’, but it’s damn close.