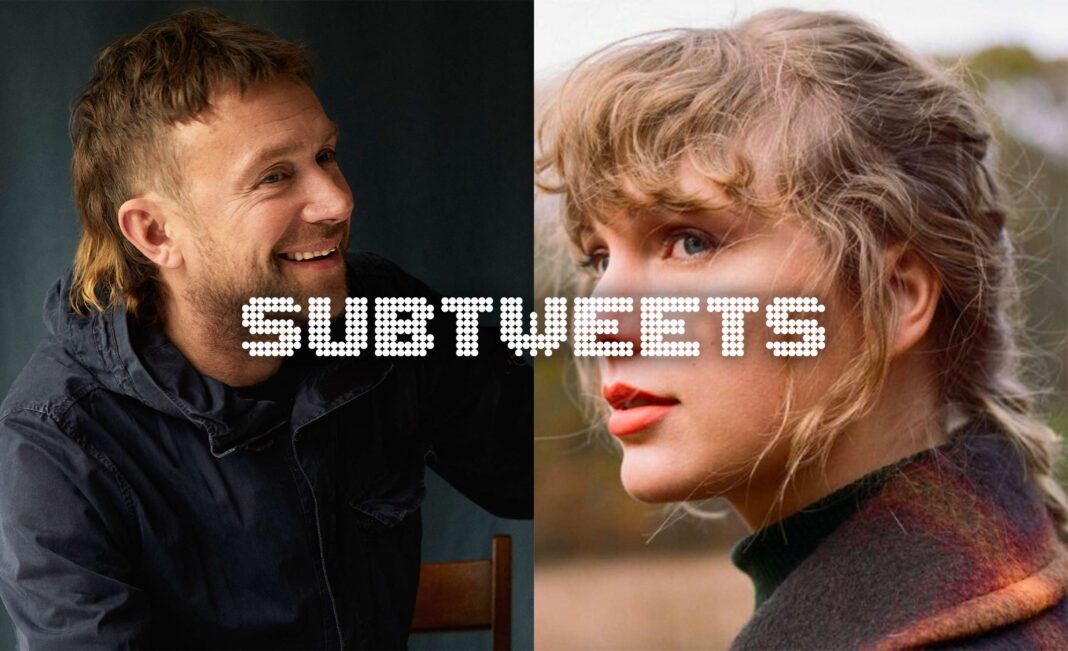 As one eagled-eyed Taylor Swift fan observes, each January does seem to embroil her in a new internet beef, defending herself from those who can’t seem to exclude her from their own narrative. 2022’s instalment, however, was probably not on most peoples bingo card; In an interview with the LA Times, Blur and Gorillaz frontman Damon Albarn invoked the internet’s wrath by baselessly claiming that Taylor Swift didn’t write her own songs, situating those that do it alone as creatively superior. Swift, understandably defended herself: “You don’t have to like my songs but it’s really f***ed up to try and discredit my writing.” Suitably chastised, he rolled out a hasty apology, invoking the classic manoeuvre of blaming it on clickbait (Ah yes, us pesky journalists, always wanting to quote the things you said). Given that The LA Times actively included mention of the journalists’ push-back and Albarn’s subsequent double-down, his apology was left looking pretty hollow, the subject of a worldwide trending topic. When everyone from Dolly Parton to the President of Chile has gotten involved, you know you’ve gotten yourself into a right pop emergency.

As many, many people have pointed out, Damon’s comments do belong in the deep dark ages. Whether he truly meant them or not, the idea of discrediting Taylor Swift on the grounds of songwriting is a bit like trying to argue that Lionel Messi is only a half-decent footballer, and should really enter the world cup solo if he actually wants to win. To go one step further and deem Billie Eillish’s songwriting as more “interesting” in comparison, because it happens with her brother and taps into darker imagery, also makes some pretty grim insinuations about what a ‘suitable’ collaboration is, imagining a scenario where the only worthwhile female work is that which actively extols deep-seated emotional trauma under the male gaze. By default, he depicts Taylor Swift as some kind of comparative Disney Princess, brushing her hair with the studio mic while the more talented men round up animated birds to do the “endlessly upbeat” ad-libs. Swift can certainly be sweet, but has this man even heard ‘Folklore’? As the literal king of group work (Blur, Gorillaz, Africa Express), his flex feels incredibly off, pitting women in direct competition when seemingly, there were plenty of opportunities to pick a new topic.

Perhaps the truly most damning part of it all is that Albarn even cares. In 2022, quibbling about the percentages that people wrote feels very much like a sixth form tirade against X Factor as the death of genuine artistry. From the rise of the internet-savvy bedroom popstar to an entire rehaul in the way we understand and consume music in the digital age, it feels as if we should have somehow moved past creativity purity as such a be-all-and-end-all clause. Damon surely knows this; he has worked with Little Simz, Mura Masa, Kano, Paul McCartney — all deeply talented folk who graft phenomenally, but who also know when to listen to other people’s ideas.

When we look back on the past decades of musical history, it is clear that a great many impeccable works have come about because of a great ability to curate. We all remember this meme that did the rounds on social media in the mid-2010s, pitting Beyoncé’s ‘Run The World’ against Queens ‘Bohemian Rhapsody’ in some sort of strange macho posturing, claiming faux-profundity over the depth of the lyrical content. “It really makes you think doesn’t it?” they’d type, hitting post on Facebook and sitting back in the perceptive smugness of a point well made. Except it’s not, not really — not only do I know what I would prefer to dance to in the club, it totally misses the point that musical ‘quality’ is an entirely subjective ideal, contextualised in its wider societal climate. When somebody writes a hit single entirely alone, it’s certainly impressive, but it doesn’t invalidate the skill that comes from performing and consolidating a collection of great creative ideas. Should Beyoncé write all her own work with pen and ink under candlelight just to prove a point, or should she continue to make use of some of the world’s best songwriters, fleshing out the best ideas with her voice and studio tools?  Without question, an artist who makes exciting, innovative use of the resources available to her is a talented artist indeed.

Somewhat ironically, Albarn’s collaborative spirit is the thing that keeps him most active, playing his part in the elevation of young careers. However, it does increasingly seem as if he has unfortunate form for making jabs at successful pop women, his personal music tastes clouding the kind of legitimacy he is willing to see. There is no clause that says he has to personally evangelise over every genre, but from his dismissive comments towards Adele’s ‘insecurities’ to this last spat with Swift, he harks back to a ‘mainstream is bad’ rhetoric that does nothing to recognise the strength of our collaborative, genre-blending climate, one in which women are actively thriving. Pop can mean a great many things, and authentic is absolutely one of them, as many great artists — Swift, Self Esteem, Phoebe Bridgers, Adele, Arlo Parks — are acutely proving.

With a cynical head on, one fears a ginormous marketing ploy. Anyone who invokes Taylor Swift’s name in a public facing interview surely knows what is incoming; out there in the twitterverse, hordes of young Swifties are discovering who Damon Albarn is, and Swift, revving up for her ‘Speak Now (Taylor’s Version)’ era, gets the revenge narrative that so often shapes her promotion strategy. You can’t blame her for rolling with the punches, but if there is anything positive to truly be learned from this episode, it’s that views like Damon’s, once the masculine norm, are slowly beginning to fall less and less in line with wider public discourse. We all love us a bit of Blur, but when you take on such dated rhetoric, you’re only going to come out of it looking charmless; next time, a creative interview partner might be exactly what the occasion needs.