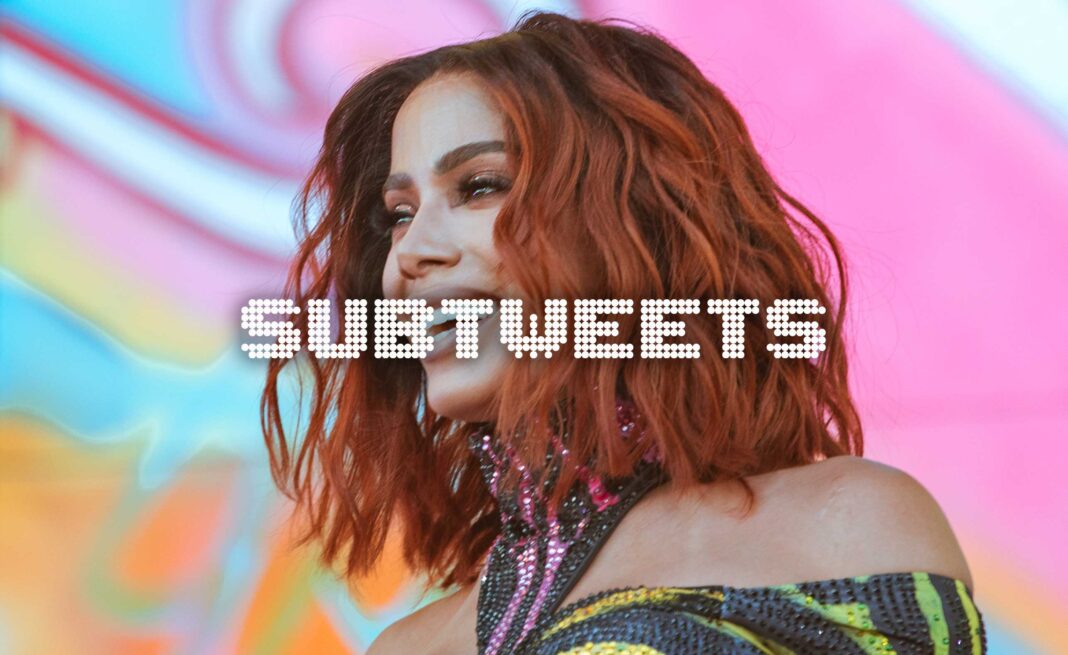 As a music journalist, there is perhaps no greater shame than an artist getting absolutely bloody massive while you weren’t looking. When I sat down in front of the Coachella livestream last weekend, I am pained to admit that the name “Anitta” only summoned up a vague memory of Latin pop and an appearance on the last Madonna album. What I didn’t know was that I was about to witness a global megastar perform one of the best mid-day festival sets I’ve seen in some time, and would start this week’s column with a formal apology. Reader, please take this as my official acknowledgement of having dropped the ball. A trap-loving, dance-break having, massive pop superstar ball.

Of course, the underestimation of Anitta is completely on me. Even a cursory glance at her Wikipedia page will reveal that she has been huge since her debut in 2013, celebrated as a singer, songwriter, actress, dancer and businesswoman. She’s got Latin Grammys and Billboard awards, nods from Lo Nuestro and the MTV EMAs. She has done more collaborations than you could shake a proverbial stick at — Nile Rogers, J Balvin, Black Eyed Peas — and has presented several popular TV shows in her home country of Brazil, lauded as one of the most influential social media artists in the world.

At the age of 29, Anitta has done more with the first decade of her career than most achieve in a lifetime. But here in landlocked UK, it has seemingly been easy to get so comfortable in our mainstream habits that we don’t pay proper attention to music that isn’t sung in the English language. Social media and a more global approach to marketing is slowly narrowing this gap, but Anitta wasn’t willing to wait; when that Coachella stage came calling, she took the opportunity and sprinted, making sure that her set wasn’t one to forget.

And what a show it was. Supporting the release of her new album ‘Versions of Me’, it began with an introduction from Snoop Dogg, an elaborate stage set up recalling the urban landscapes of Rio De Janeiro. Clad in the colours of her flag, Anitta twerked, sang and rabble-roused through 45 minutes of flawless, colourful performance, bringing a real sense of liveliness to a festival that it sometimes criticised for being a little too sanitised. I was clearly not the only one mesmerized; during his headline set, The Weeknd changed his lyrics in ‘Party Monster’ to shout out her (admittedly admirable) ass.

The first Brazilian solo artist to perform at Coachella, Anitta’s moment in the global sun has clearly been a long time coming, but makes total sense when you look at the place she is now at, musically and visually. Blending samba, funk, capoeira, reggaeton and more, there was truly something for everyone in her Coachella set, coming off the strength of ‘Version Of Me’s international focus. The record is trilingual (English, Spanish and Portuguese), and features an array of smart US guests — Saweetie, Khalid, Cardi B. Super producer Ryan Tedder was involved with production, as well as Stargate (Mariah Carey, Beyoncé, Britney) and Andrés Torres and Mauricio Rengifo, the duo responsible for international smash ‘Despacito’. With intriguing samples and crossover star power abound, there is plenty in her music to stir up interest from even the least initiated listener. Top all of this off with her ability to consistently serve a serious look, and you have a popstar who is ticking all the right boxes.

The global attention of a Coachella slot wouldn’t have hurt Anitta’s current standing (see how many people Shazammed her songs in the livestream’s aftermath), but she also has a committed grassroots fanbase. When Mega-bop ‘Envolver’ was released, fans went hard with the usual stan tricks; setting up streaming playlists that played it for 24-hour loops, offering competitions for those who campaigned the hardest. It made her the first artist from Brazil to top Billboard’s Global Excluding US chart, insinuating an enormous grassroots following. Not every artist can incite this level of effort, but her community is testament to her years in the industry, building slowly towards her global breakthrough.

It’s no surprise that her fans are so passionate. Anitta’s personality is incredibly stan-worthy, fun and flirty but committed to important topical issues. She sticks close to her roots to evoke a sense of national pride (just look at the super-smooth ‘Girl From Rio’), but isn’t afraid to speak of her ambition as a multi-faceted entertainer. Openly bisexual, she will be headlining LA Pride in The Park this summer alongside Christina Aguilera, and advocates for shame-free sexuality and expression in a way that is clearly central to the work she creates. This isn’t always the easiest feat — Brazil is currently under far-right leadership, and liberal views around abortion and LGBTQIA+ rights can be difficult to parse. In being someone who is willing to make a stand, intimidating onstage kisses with women and vocally identifying as a feminist and environmental activist, Anitta feels like someone to believe in.

Anitta is not the first Latin artist to be unfairly slept-on in mainstream US markets, and she won’t be the last. It took Colombian artist Shakira five albums to really cross over, only igniting the US when she released 2001’s English-language ‘Laundry Service’. Fans and music journalists alike can’t be on top of everything, but to ignore the great talent that exists in Spanish and Latin-pop markets is to deny yourself of some seriously feel-good mood, the type that makes your hips twitch whether you know it or not. If I have learnt anything from my musical nap, it’s that I need to start waking up earlier — who knows what other global icons I might have missed?