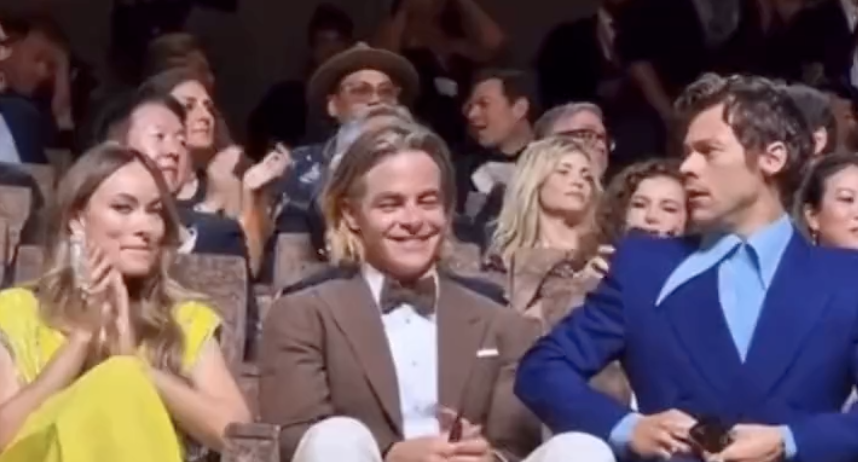 At this point, it’s fair to say the drama surrounding upcoming movie Don’t Worry Darling has got out of hand.

When the cast finally all got together for the red carpet and premiere of the film at the Venice Film Festival yesterday fans were scouring photos and videos for any sign of the apparent spat between director Olivia Wilde and leading actor, Florence Pugh, any animosity between Pugh and the rest of the cast and of course, a red carpet debut for Wilde and Harry Styles as a couple.

Mostly, we were gifted none of the above. Wilde dodged some Pugh-related questions at the press conference and it was all smiles from the cast for the photo call.

That is, until, they took their seats for the premiere where things took a slightly bizarre turn. One video clip makes it look as though Harry Styles spat at Chris Pine as he sat down.

The more you watch it, the more you can’t unsee it. But sources for both parties have now confirmed this is utterly false.

“This is not true,” said sources close to Styles on Tuesday. Pine’s rep later released a statement saying: “This is a ridiculous story — a complete fabrication and the result of an odd online illusion that is clearly deceiving and allows for foolish speculation. There is nothing but respect between these two men and any suggestion otherwise is a blatant attempt to create drama that simply does not exist.”

Even without this latest ridiculous drama, the marketing campaign for Don’t Worry Darling – which hasn’t received glowing reviews despite a five-minute standing ovation at Venice – has been second to none. Whether intentional or otherwise, the movie has barely been out of the headlines for weeks. Who knew that getting your lead actress to do no promo was all that’s needed to make your film one of the most-anticipated of the year.

New Arctic Monkeys album ‘The Car’: everything we know so far