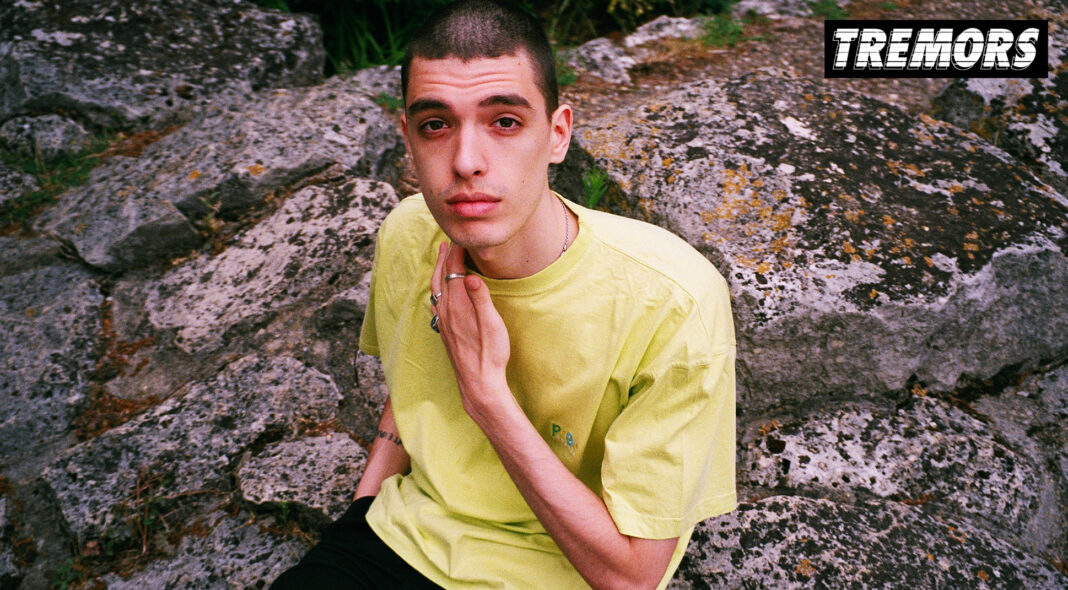 “I literally just turned twenty,” sings Leo Bhanji on ‘Blade of Hope’ a lo-fi, emo piano track taken from his stirring debut EP ‘No Guard’. The London musician – who did, literally, just turn 20 – is the newest addition to the Dirty Hit family, the cult record label which has spawned some of the breakout artists of recent years, with Beabadoobee, Wolf Alice and The 1975 among their signees. But unlike his peers, Bhanji’s sound is drawn more from the work of Dev Hynes and Frank Ocean – both influences – than the indie-pop, the label has become known for.

Born in The States to mixed-heritage parents, Bhanji moved from LA to London’s Finsbury Park as a toddler. Teaching himself to use GarageBand on his mum’s laptop and messing about with sounds and beats, he started making music as a pre-teen, but it wasn’t until recent years that he considered becoming a musician proper.

“It was just a hobby. I was into the technology first,” he says of his early Soundcloud demos. “I was interested in dubstep which was, at the time, just like a technology thing. And then I guess the transition for me into actually caring about the music was when I realised I liked the intros to songs. I only got a microphone a few years ago, and made my first track with vocals.”

Bhanji was previously part of London Collective 237, a mob of “rappers, singers, producers, DJs, designers and talented people” whose Facebook bio dons them “the weird ones”. It was as part of this crew – often with features from other members of the collective – that Bhanji started uploading tracks to SoundCloud back in 2017. One of the songs – ‘Heart of Gold’ featuring Donalee – got noticed by Jamz Supernova on her BBC Radio 1Xtra show which started things moving.

“I didn’t feel like ‘Oh my god someone’s finally noticed me’ because other smaller shows had played me before. But it does show that at a certain point the same input produces different results, I guess.”

It’s this quiet confidence and steadfastness in his ability that makes Bhanji such an exciting prospect. His rich, weighty vocals over fuzzy production and affecting loops of keys and strings worm their way deep into your core. Lyrically, it’s a ‘less is more’ approach, the chosen words delivering a punch of emotion that feels heavy, with a sting to the eye.

“My family and I are definitely very open people so I’ve just been brought up able to say things,” he says of the songs’ emotion. “But then there’s still stuff I don’t want to say out loud, and that’s probably what ends up in the songs,”

The music of his parents has been a big influence on Bhanji’s sound, growing up on his Dad’s eclectic record collection. “He would always play a lot of varied music, a lot of old school stuff like Sly and the Family Stone. I know the roots of a lot of stuff I hear now because of my dad and that’s a useful foundation for me to actually be a musician rather than a producer,” he explains. “It was all Black music. Maybe that’s why I was out the other day.”

When we talk, it’s the week of the first Black Lives Matter protests in London which Bhanji and his friends have been an active part of.

“I didn’t ever march for anything before but I guess it’s just the immediacy, right? You can actually care about it emotionally. With something like climate change, I don’t know, I probably didn’t engage as much cos it feels like a distant thing.”

The deaths of Breonna Taylor, Ahmaud Arbery, George Floyd and countless others have indeed delivered a painful and very immediate reminder of the systemic racism that exists in societies across the world. As someone at the start of his career and with an ever-growing number of fans and followers, Bhanji is aware of the platform he’s creating, seeing it not – as many people would – as a road to riches but instead as an opportunity to spread awareness for the things he cares about.

“I don’t want to be on a pedestal for people but on the other hand, I’m definitely ready to have a platform, especially these past few weeks. I know what I could try to do to make the world a better place and if I got the chance I wouldn’t waste it, you know?” he says with a heartfelt sincerity.

“Right now, we’re talking about defunding or abolishing police forces, right? I’ve taken a lot of facts and theories around that subject that I can relay to people to keep them informed and understand what they are seeing. Not a lot of people have time to read around and take things in.”

As a lyricist – something that by his own admission isn’t as instinctive as producing – reading is an important source of inspiration for Bhanji, whose smarts shine through when we talk, the childhood lampshade visible behind him on the Zoom call the only subtle reminder of his years.

“There are a lot of different thoughts going on when I write lyrics. I know that I don’t want to over word things. I try to read simply-worded books to get a nice grounding in how to phrase things,” he says waving a copy of Raymond Chandler’s The Long Goodbye, his current tome of choice.

“I’ve just been trying to be a better writer in a broad sense. Frank Ocean has an old tweet where he said: ‘If you can write, you can write a script or a book or a song: it’s all writing.’ But I don’t have the attention span to write a longer format than a song. So I’m pretty constrained to what I do.”

Bhanji has ADHD which manifests itself in an incredible dedication and ability for things he enjoys but less so for things he doesn’t. Getting through school, despite that, he delved into music tech because it was fun, the “software and the bright colours” helping him to hone his craft. “I just did music until I was good at it. The ability to practice at something like that is a bit easier if you have ADHD because you keep coming back to it.”

Not medicating his condition for fear of stifling his creativity, Bhanji recognises the potential downsides to ADHD too. “I’m not really super keyed into other people the way I would be,” he admits. “So while I’m young and everyone’s just milling about, it’s way easier to just brush over that and keep up relationships. I guess I don’t really check in on people. But that’s just a bad habit… I could just stop that without medication.”

In such unsettling times, it’s hard to pinpoint what the next six months hold for any of us but Bhanji’s psyched about what’s to come. “Music wise I have a lot of demos which I’m really excited about and I want to just get them into little tracks, little projects and things and keep releasing way more regularly than I was before. I thrive with music out there so I think I’m just going to be totally on one and have crazy ideas every day! I’m hoping that will be the case.”

While we wait for those ideas to spark, the tracks of ‘No Guard’ somehow perfectly soundtrack this long, bleak summer. Be it the affecting ‘White Hills’, Bhanji’s “attempt at a guitar track” or the poignant ‘Blade of Hope’, a track about a friend in crisis, Bhanji’s music has a unique and boundless quality. “I was a teenager until recently. We have crises everyday,” he says with a smile. “ But no, it’s hard to say what I’ll be doing outside of music. I’m just with my friends, doing my reading about the police, Black history and all the things I need to know about for the world.”

Right now, there’s not much better way to spend your days.