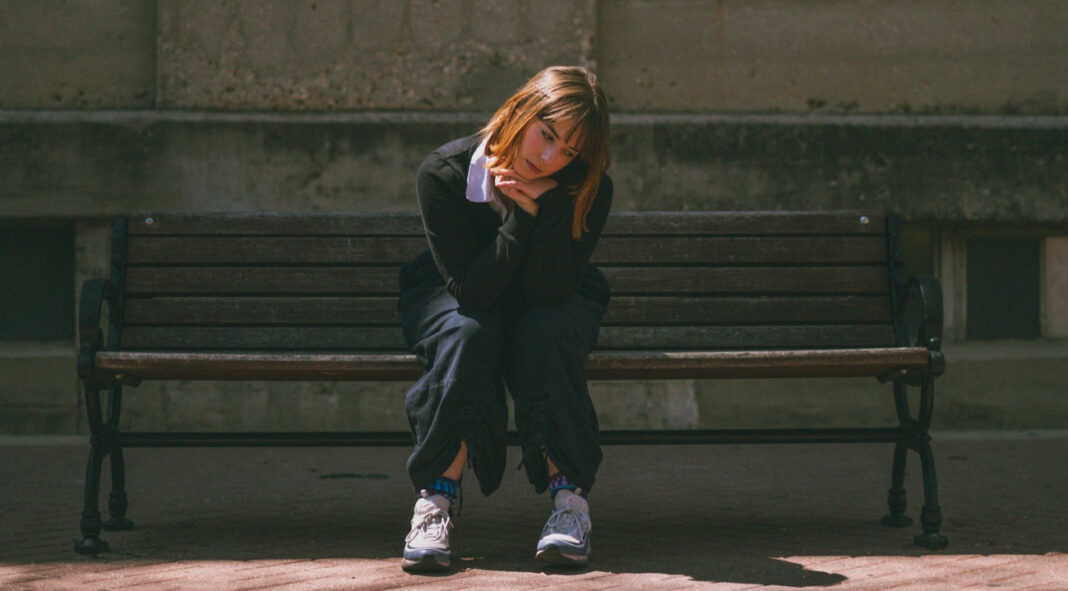 Quite suddenly, in the middle of her conversation with The Forty-Five, Jordana is quite literally enveloped by a brigade of tiny creatures.

“You’re my baby!” the musician yells in muffled tones, straining to peer around from behind a greyhound wearing a doughnut-pattern neckerchief. “I have to make this one sit on his little heated pad because otherwise I’ll hear his little tippy-tappy toes while I’m trying to record,” she eventually says, holding up another smaller and fluffier dog in the loving manner of Mufasa holding Simba aloft in The Lion King. A cat’s ginger tail briefly obscures the camera – and there are three more animals on the loose elsewhere. “You can probably hear them running around on my first album somewhere,” she says. “It’s like: ‘Dude, just sit down for five seconds, mommy needs to record!’”

Based in Wichita, Kansas, Jordana made and released her 2019 debut album ‘Classical Notions of Happiness’ from her bedroom – dissecting isolation and the ache of grief atop minimal lo-fi with a pop tinge. The record became a sleeper hit, and the 20-year-old later signed to New York indie Grand Jury.

Since, Jordana’s music has become gutsier and sharper – and her 2020 EP ‘Something to Say’ is a swaggering statement from the aspiring “multi-genre queen’.

You grew up in Maryland, but now you’re in Wichita. Do you know any weird bits of trivia about your hometown?

It’s a dark thing: I live on the street where the BTK strangler [Dennis Lynn Rader] killed someone. Damn, serial killers. There’s so much stuff I should know about the place I live, but I really don’t know shit about it. That was a very un-fun fact, sorry.

What have you been up to instead of touring?

Um, I clean the house a lot! Sometimes I’ll smoke a bowl and clean the house. I play a lot of video games too, like Apex Legends, Grand Theft Auto, and Fortnite. I’m waiting for my Far Cry 5 disc to come back, because it feels good to kill white supremacist cult members. The Last of Us is one of my favourite games ever – and Life is Strange. It’s a story game, and it’s also gay. Who doesn’t love that?

Were you a massive swot at school, or did you sit at the back of class?

I would sit at the back of class. Oh god, I was so annoying. I had this violin case covered in super-bright, eye-shocking tape. It said ‘Jordana the Dragon-Leader’. I would throw on anything I could find, and go to school in a big-ass Gothic skirt or something, with a boring band t-shirt. Kids would say ‘why are you wearing that?’ I’d just be like, don’t judge bitch. I like to repress those memories, I got bullied a lot. But hey, I learned that school is a thing you go through, and you can choose whether to dwell on all the bullshit, or just push the bad people away, grow up, and be your own person.

What kind of music was Jordana the Dragon Leader into?

I had this tablet with my illegally downloaded playlist. It had loads of The Last Shadow Puppets, Arctic Monkeys, Vampire Weekend, The Strokes, and Grizzly Bear. I’m still logged into The Strokes fan-page that I set up, actually, I just haven’t posted on it. So cringe. But Grizzly Bear especially are still one of my favourite bands. I was raised on Death Cab For Cutie. Whenever me and my mum went on roadtrips, we would just play ‘Plans’ on repeat, and then ‘Narrow Stairs’.

And what song or record made you want to be a musician?

When I first heard ‘Sleeping Ute’ by Grizzly Bear – the first track on ‘Shields’ – holy shit. That opening guitar, Daniel Rossen’s vocals are iconic. I was like, damn, I want to make music like that. It’s fucking crazy. I want to make shit like this. I feel the same way about Broken Bells. Dangermouse and [The Shins’] James Mercer, what a great duo, they make magic together.

READ MORE: WHAT IS BEDROOM POP AND WHY IS NOW THE TIME TO CARE?

Dangermouse is a big fan of yours…

What was the first song you ever wrote?

‘Canvas’ from my first album ‘Classical Notions of Happiness’. It was a GarageBand iPod thing. It’s about opening yourself up and trusting somebody else – trying to go with the flow and not expecting the other person to be as honest.

In that case, the experience of recording your new EP ’Something To Say’ must’ve felt wildly different to the process of making a debut album – because on that last record you were writing music for the very first time. How did this one differ?

Well, now I’m thinking more about the expectations of people who are listening. I want to have a wide range of things that people can relate to. I make what I like to hear. It’s weird, I always thought I would be making music for other people – trying to get the interest of other people. But now i’m finding out that I do this a lot for myself to cope, and I didn’t think about that before. I’ve no idea why. I once cried at the studio because I was writing about something that was super-scary, and I needed a minute to actually process what was going on in my head. When you put something into words before you’ve even processed it… it’s a brain-shock. “Oh shit, these are my feelings, and I can see them now”. It’s like confronting yourself. It’s weird, it’s scary.

‘Classical Notions of Happiness’ is a very personal debut, and some of those songs are about grief. Did you find that after going through death and permanent loss changed the way that you viewed happiness going forward?

Yeah, definitely. That was the start of everything. ‘Remembering You’ is the first track on there, and that’s where everything started getting crazy with my emotions. In junior year my friend killed himself. It was so traumatic, seeing all my classmates and everybody else, and how awful they felt, too. You’re too young to be fucking going through that, for real. That really set me into the spiral, and that’s when my depression was at its worst. You’re questioning everything. Now that I’ve written about it I feel stronger now because I know what’s going on in my head.

Listening to a song like ‘Big’ – there’s a clear strength and confidence to that song, even through to the way that it sounds. Do you think that song is indicative of where you’re at now?

Ever since [producer] MELV and I wrote ‘Crunch’ I was so excited in the studio just blasting it, because I thought it was the coolest shit. I wanted that grittier, bad-ass sound – very Black Keys. And ‘Big’ is about the general feeling in those moments where you feel really confident and good in yourself. Even if it’s the last time you’re ever gonna feel this way, just vibe with it.

With ‘I’ll Take It Boring’ you’ve accidentally written an anthem that speaks to the isolated, socially distanced times we’re all living through. Did the timing feel strange?

Yeah, but more because that song came out on May 12 – and that date has a lot of significance to me. That’s the day that my friend took his life. It felt like it wasn’t my place to release anything on that day, unless it was in light of what had happened. That’s also the day that I met Sydney [my girlfriend] in person, she came to DC and we saw Florist and Frankie Cosmos together.

You mentioned just now that MELV produced ‘Crunch’ on the re-issue of your debut – he’s also produced ‘Something To Say’. Did those initial sessions with him spark a new chapter?

Before that, I did all of my music by myself. I had this feeling of wanting to make something by myself, that was original. I was scared to work with other people because I felt like I wouldn’t be able to say it was mine. My self-worth was so invested in that, which is wrong. It’s not a good way to think. I was often letting myself down, because I would get frustrated and just give up. But MELV just gets my vision, and we communicate so well. Now I’ve opened up so much. I want to be the multi-genre queen, for real. I don’t just want to be this indie girl. I just want to make a lot of cool shit.

Jordana’s new EP ‘Something To Say’ is out now.