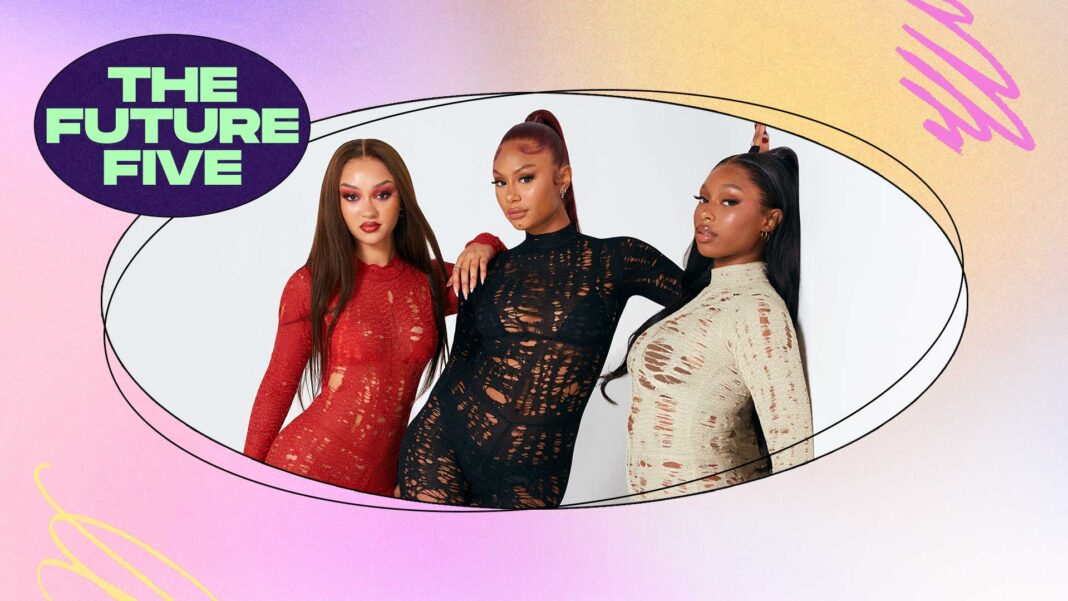 If there is one group that has got everyone talking over the last few months it’s FLO. The London trio, raised on a diet of Brandy, Aaliyah and TLC, have already bagged the prestigious BRIT Rising Star Award (the first group to ever do so), topped the BBC Sound Of Poll for 2023 and garnered praise from SZA, Missy Elliot and Clara Amfo to name but a few. Their debut single, hella sassy breakup anthem ‘Cardboard Box’ was an instant smash, being streamed over 20 million times and counting and their MNEK-produced debut EP ‘The Lead’ delivered more tracks that could plucked straight from the golden age of R&B. With sold-out shows and more new music on the way soon, there’s no denying these ladies are in for a very big 2023 so we had to pin down Renée Downer, Stella Quaresma and Jorja Douglas (AKA FLO) for a chat about the group’s rapid rise.

Congrats on your BRIT Award. Tell us about the moment you won. What did it feel like?

It felt incredible! It was a moment of deep reflection for all the hard work over the past year. We were the first group to win the Rising Star so we are grateful to all our fans and everyone who voted for us. We used to watch the BRITs with our mums and to think we’ll be there this year – it’s a dream come true!

You have built SUCH an engaged fanbase – your FLOWERS. What does that relationship mean to each of you? Any meaningful fan interactions you can share?

Our amazing fanbase is growing! We love them all. The memes and videos shared on Twitter always have us in stitches of laughter. For the new year a few of our fan accounts made round-up lists of our achievements and it was quite mad to see everything in one place.

What’s been the biggest pinch-me moment so far?

Being the first group to win BBC Sound Of and BRITs Rising Star.

Have you found yourselves each taking on slightly different roles in the group? Tell us about your dynamic and how you work together.

Renee is the most organised and shows up as a female boss. Stella has profound thoughts and also loves to party, her stamina is something to behold. Jorja is the comedian of the group and outspoken, when Jorja speaks we all listen.

There’s a real lack of girl groups around right now. Why do you think you have been the ones to change that?

For us, it’s music first. We really waited until we knew we had the right song to launch. ‘Cardboard Box’ captured the spirit of the music we listened to growing up like Brandy and Aaliyah but also a modern women’s take on a breakup. We hope that we can pave the way for new girl groups to come through.

What have been some of the challenges you’ve faced as three young Black women in the music industry?

We just want our voices to be heard. We might have to speak louder and be more direct so that people understand our vision, but there are three of us and that is the greatest support system we could ask for.

What are you most looking forward to in 2023?

What do you want the world to know about FLO?

This is just the beginning!

READ MORE: The BRITS Rising Star nominees prove that the future of homegrown R&B is bright