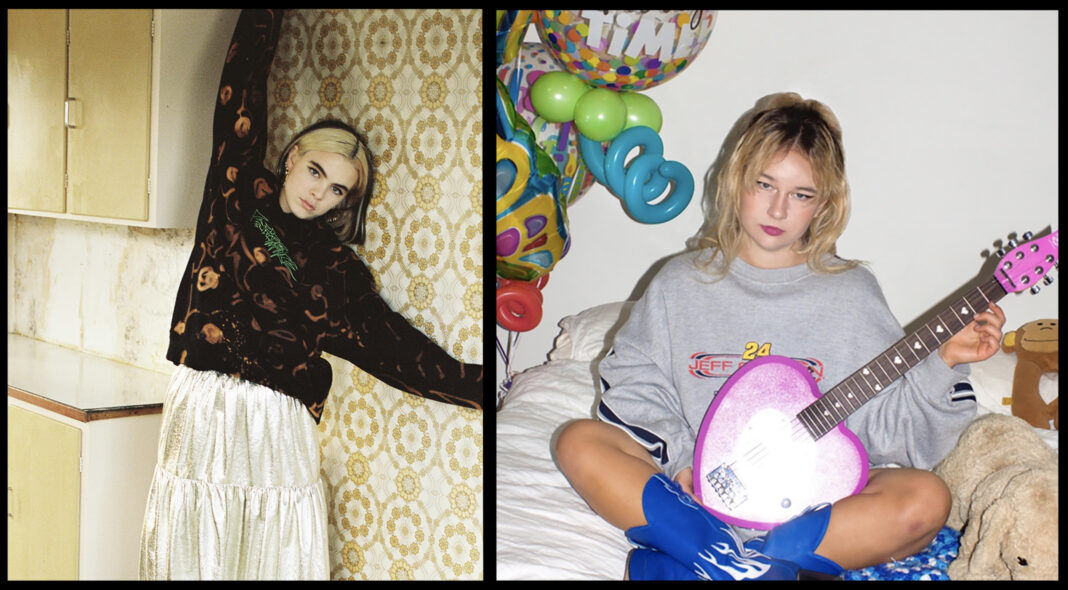 Benee‘s had quite the year. Inadvertently writing the tune of isolation, her single, ‘Supalonely’ soundtracked thousands of teens’ quarantine experience, popping up on millions of TikTok videos throughout the middle part of the 2020.

But that’s old news now. The teenage star – real name Stella Bennett – has just released her debut album and, thanks to New Zealand’s world-class handling of the pandemic, is already back to playing shows and festivals in her home country. The album, ‘Hey U X‘, features a lot of pretty exciting guests including Australia’s Mallrat (Grace Shaw), with whom she collaborated on track ‘Winter’.

We sat in on a chat between the two musicians as they talk about their tracks of the year, branching out from songwriting and singing in Simlish.

The Forty-Five: Hi guys! Tell us about how you first got to know each other.

Mallrat: I first heard of you when you sang on [Aussie radio station Triple J’s covers segment] ‘Like A Version’. I think it was the Petit Biscuit one.

Benee: That was ages ago!

Benee: Aw! I can’t remember when it was for me. I think I found your song ‘Groceries’ and was like, ‘This is really cool’. When did you release that? It was definitely a few years ago.

Benee: Yeah, and then we met last year at Laneway [Australian music festival]. You were the surprise act.

Mallrat: Yeah, and then you got me a ticket to the Melbourne one, which was very nice.

Benee: No problem at all! So that’s how we met! And that’s how I found ya! Through Spotify.

Mallrat: I’ve been stanning since the first day.

Mallrat: Have you done your Spotify Wrapped yet?

Benee: Yeah, I have!

Mallrat: What were your most-played songs?

Benee: I expected this because I got it last year as well. But I got ‘CAN’T SAY’ by Travis Scott? I can’t remember what other ones were my tops. Oh! Aldous Harding. I played ‘The Barrel’ like…

Benee: I can’t remember what my other ones were. Oh, there’s quite a lot of Wu-Tang played because I’ve been into them at the end of this year. Lots of Travis Scott. What were yours?

Mallrat: I’m gonna read you out the top ones. No.1 was ‘I Want You to Love Me’ by Fiona Apple. Next, was my song, ‘Drive Me Round’. ‘AAA Powerline’ by Ecco2K And then Silverchair. Then down the list there’s like lots of Three 6 Mafia lots of Ninajirachi and yeah, lots of fun things: Azealia Banks, Phoebe Bridgers.

Benee: Cool! It’s sick looking at it, eh? I but I realised, so many times I get quite obsessed with a song when I find it and I’ll play it non-stop and then I’ll get really sick of it. Oh! And also do you know this girl called Hope Tala? I think she was my number one. She has a song called ‘Cherries’ and her voice is so good. I kind of skipped the rap. It’s Aminé – I like him but I just play the choruses and then finish the song – But it’s so good. She also has a song called ‘All My Girls Like To Fight’

The Forty-Five: Both of you have branched out from songwriting: Grace [Mallrat], you’re focusing more on producing and Stella [Benee], you’ve started your own record label. These are spaces in which you don’t often see women – particularly young women. What made you want to explore these areas?

Mallrat: I was doing production before I started songwriting at a very basic level, just GarageBand. And then, when I started actually making music with professional musicians, I felt really unqualified and I forgot about making beats for a little while. I felt like I didn’t know anything. That was around the time of my first EP, and then with the second one, I realised that I really missed it and the more I knew about it, the easier it would be to articulate what I wanted in sessions and stuff.

So since then, I started to co-produce things and really just learn as much as I could. Now, I really want to start producing for other artists as well as myself. Even if you don’t want to actually be a producer, as an artist, it’s a really helpful skill, and I just hate not knowing the words for what I’m trying to say. That’s the main reason.

Benee: I feel like I can relate to that.

For me with the label stuff, I realised that people were listening to me blabber on about climate change, and things that I want to talk about and I’m like, ‘OK, well, then, maybe I should start telling them about these artists that I’ve found.’ That’s something that I like to do anyways. So I was like, ‘Why don’t I start a label?’

My biggest thing was I wanted it to be made by females, because I feel like this industry is filled with men in higher roles, which is totally chill, but also, it’s so nice to work with women, at least for me. It can be kind of scary when you’re put in a meeting, with like a room full of businessmen who are like, ‘You should do this’. I personally just prefer to be around women. I’ve kind of learned now to say no to stuff. I mean, I feel bossy which sucks that I have feel bossy to get my point across, but I don’t know. Women are great!

Mallrat: My tour crew, except for one person, are all women. And it’s so good. It’s fun, first of all, and it feels like a little family. My new tour manager, Nikki, actually only started tour managing maybe a year ago, but she’s the best one that I’ve ever had. I’ve had some really experienced tour managers, but I think a lot of that has to do with just being very intuitive about people around you. I think that’s something that women are naturally more able to do.

The Forty-Five: Benee, I know you’ve been able to play proper shows again to thousands of people since the pandemic. Grace, how have things been in Australia?

Mallrat: I’m going to Darwin this weekend to play my first festival since this all happened. I’m so excited. I’m in Melbourne at the moment, and it was pretty bad here. But we did really strict lockdowns. But there’s been no cases [of COVID-19] in three weeks or something. Yeah, so we’ve pretty much squashed it. And things are cautiously going back to normal. And in Darwin, they pretty much didn’t have any cases at all this whole year. So it’s like, normal!

Benee: That’s gonna be so cool!

Mallrat: Yeah! I’m so proud of Australia and New Zealand!

Benee: We’re actually, like, the best! Honestly, come on everyone. Look at us as an example of what to do.

Mallrat: How were your shows, Stella?

Benee: They were so fun. I’m so stoked. In the middle of it all, I was kind of just in my room thinking ‘I’m not gonna play a show for two years, and I’m just going to be the saddest thing on this earth. But now, it feels amazing. We have a festival this Saturday, as well, which will be our first so I can relate to that. It’s just a huge celebration, and everyone gets more fucked up. Everyone’s like, more excited. And it’s just a good time!

The Forty-Five: What have been some of your career highlights to date?

Mallrat: I think it was recording one of my songs in Simlish [the language used in computer game, The Sims].

Benee: Oh my God, me too! We’re doing one… I don’t know if it’s been announced yet. I love The Sims so much. Was it hard?

Mallrat: It was OK until they added an extra syllable in! The song was ‘Charlie’, which is already a lot of words to fit in. What song are you doing?

Benee: ‘Kool’ because we’d already made a Sims themed video for it. It was fun!

Thanks for letting us join your conversation!

Benee: Yeah, see ya! I hope your festival goes well Grace. You’ll have to come over and stay.

Mallrat: I would love that. Talk to you soon!