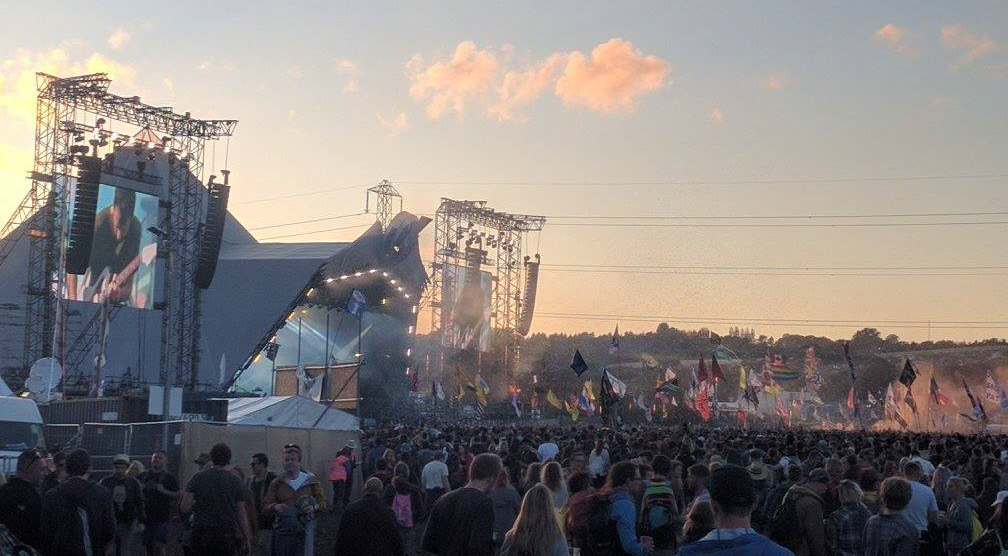 So by now we’ve probably all had a little look at the annoyingly gorgeous weather forecast for what would have been next weekend’s Glastonbury. It’s ideal; mid-20s and with a little bit of cloud cover and a breeze. Even if you didn’t have a ticket for this year’s festival, I bet you had a little sigh about what could have been; mild sunstroke, possible dehydration and the greatest five day weekend of the year.

My first Glastonbury was a post-GCSEs jaunt in the back of a truck that belonged to a bloke who did some building work for a friend’s mum, which wasn’t as dodgy as it sounds, honest. Three somewhat overwhelmed 16 year olds, we had no idea what to expect. The scale of it was immense. We missed David Bowie, largely forgot to eat, definitely didn’t take enough money, saw an unnecessary amount of naked hippies and only really started to understand our way around the site on Sunday night. It was maybe the best time of our lives.

There have been many, many Glastonburys since, each packed with experiences verging from the totally sublime to the utterly ridiculous. There was the time a friend’s tent was swept away in the flash floods and she had to sleep in the Acoustic Tent. The time I cried while singing Happy Birthday to the Dalai Lama with Patti Smith. The time I somehow ended up holding back Carl Barat’s hair while he vomited by the Stone Circle. The time I shouted about the majesty of Bruce Springsteen to Ed Balls. The time I realised that the Verve were actually amazing, mid-way through their headline set. The time I heroically managed to find my friends in the Kanye scrum after deciding, five minutes before stage time, that I quite needed to go to the loo actually. The time Ricky from EastEnders was, like, everywhere. The time that tiny little wine bar on the back of a trailer doubled up as classic rock disco. The time my mum called me while I was watching East 17 to tell me Michael Jackson was dead. The time I basked in the glory of some of the world’s greatest artists who are now no longer with us; Amy Winehouse lamping a guy in the crowd from the barrier in sequinned mini-dress, Leonard Cohen in bolo tie and fedora bowing elegantly during his sunset rendition of ‘Hallelujah’ and country king Kenny Rogers playing ‘The Gambler’ – the only song the crowd seemed to know – twice. The times I definitely should have gone to bed before the sun came up and got more than two hours sleep.

I didn’t go last year – I all too clearly remember mumbling something about there always being 2020 instead – and watched it on TV from the comfort of my own living room. On the Sunday night I’d been out drinking more negronis than is wise for a school night and rolled home around 10pm, immediately switching on The Cure’s Pyramid Stage closer. I turned the lights down and the volume up and I’m still not sure if it was down to the level of alcohol in my system, but it was genuinely almost as good as being there.

So while there won’t be the chance to get absolutely feral in the fields of Somerset this midsummer, or hold back a B-list indie star’s fringe as he voms, the fact that the BBC have promised to broadcast some of the greatest ever Glastonbury gigs means that it’ll still be possible to feel the festival’s seductive, mind-altering power. Just remember to sink at least five cocktails before reaching for your remote control and you’ll be golden.