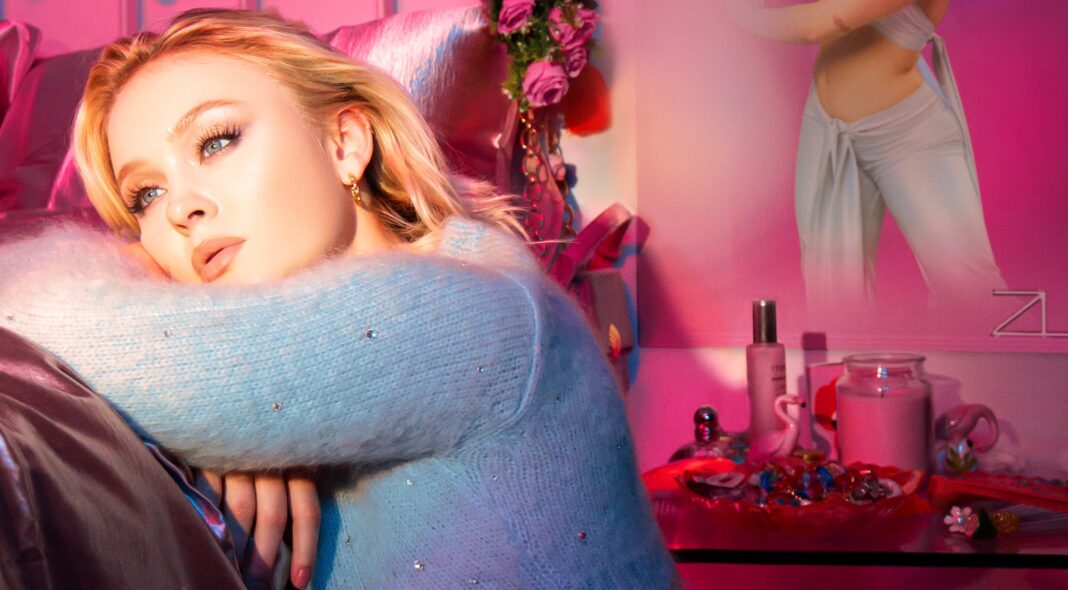 On the cover of ‘Poster Girl’, Zara Larsson leans against the side of her bed, a vision in a cropped baby blue jumper. Flowers entwine the bed frame, and posters line the wall behind a teenage altar of candles and perfume. Holy pink light illuminates it all. The album art evokes the campaign shots for Mariah Carey’s 1999 album ‘Rainbow’, but here Larsson is both the pop icon on the walls and the young hopeful fan. It’s a good image for a time when a bedroom is not just a dreamer’s refuge, but an office, classroom, studio, disco, site of ritual and worship – our whole world.

The cover might be one of the best bits about Larsson’s third studio album, ‘Poster Girl’. It’s been four years since ‘So Good’, her international debut. That title alone eliminated all trace of Swedish modesty: the slick Americanised sound guaranteed big Spotify numbers and chart success. “I’m right here,” she asserts ten minutes in to ‘Poster Girl’, as if it’s only 2018 and the album didn’t emerge slower than a turtle. There are surely many reasons for the delay, but a perfectionist streak must be one, self-doubt that stands apart from Larsson’s otherwise outspoken charisma.

The politically-engaged feminist was never an idle dreamer: she won Swedish talent show Talang aged ten, and in 2016 made Time Magazine’s list of influential teens after her hit ‘Lush Life’ the previous year, a huge single that lingered in the charts for months. Successful collaborations with MNEK and Clean Bandit followed, and the latter’s ‘Symphony’ earned Larsson her first UK number one. Output slowed in recent years to a drip-feed of singles, the best of which – ‘Don’t Worry Bout Me’ and ‘All The Time’ – do not make the ‘Poster Girl’ cut.

Inexplicably, her 2018 single ‘Ruin My Life’ does appear: its age gives the otherwise straightforward album the incongruous feel of a hastily assembled pre-drinks playlist. Yet amid some clangers – ‘WOW’, and the forgettable ‘Talk About Love’ with Young Thug – there are songs that would make good singles. These mainly fall to the bottom half of the record, from the addictive diction of ‘I Need Love’ to the Carly-Rae Jepsen chirp of ‘FFF’ (“falling for a friend”).

‘Poster Girl’ dances back and forth between empowerment (“I’m happy / I don’t need someone”) and emotional vulnerability, the wilful and risky surrender of your heart (“I want you to ruin my life”). Yet the vulnerable moments never register as weak, partly because of Larsson’s assertive persona, but also because of the way the album sounds: these are big songs in full technicolour pop. You can’t help but think of ABBA on ‘Look What You’ve Done’, a track which dials up the disco via symphonic strings and funky basslines.

If anything, on ‘Poster Girl’ Larsson is too competent, as smooth as a Spotify-generated playlist. But there’s no reason why she should fail: she has talent, personality, and an easy malleability. She knows how to make solid pop song. You sense Zara Larsson’s already ready to tear these posters down from her walls, and replace them with something even better.