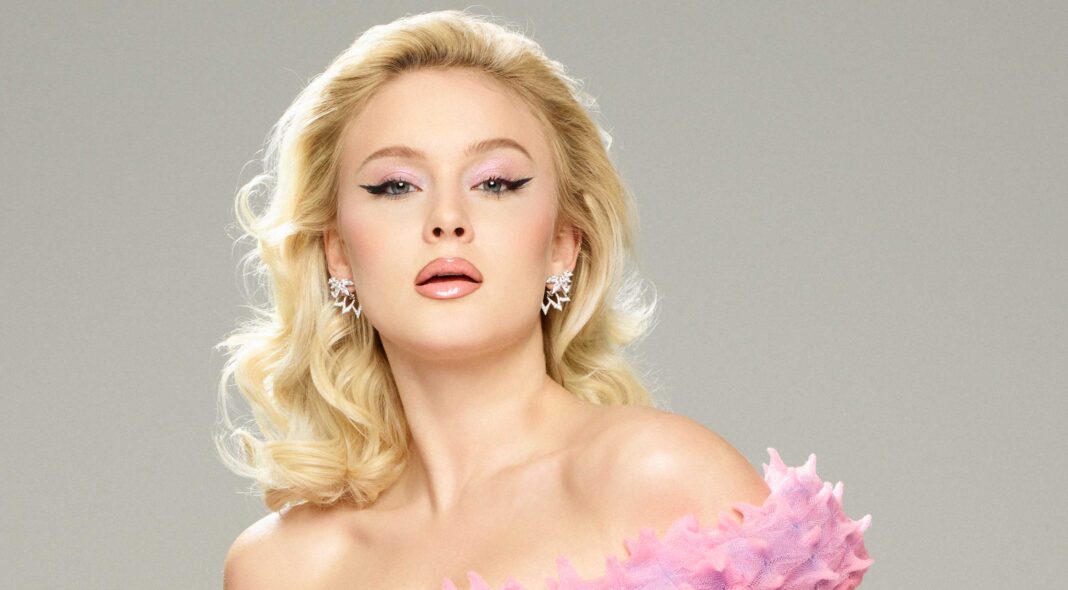 Zara Larsson is snuggled comfortably in the corner of her spacious couch to chat about her upcoming second album ‘Poster Girl’. “I feel ready and finished.” She pauses and laughs, “Well, no, that’s not true, I definitely could have pushed it another year or two. Or three or four! I always find excuses to push it because it’s nerve-wracking to release your second album. Now it’s been so long that I feel like it’s my first album again.”

To be precise, it’s been four years since the release of her debut album ‘So Good’. With sugary pop hits like ‘Lush Life’, ‘Symphony’ and ‘Never Forget You’, it soon went global and launched the 23-year-old, Swedish pop singer into the international consciousness. When putting together her second album, however, Zara wanted something that had a through line rather than a collection of radio singles. “I love ‘So Good’ and I love that it’s a bit all over the place, but it’s a little sonically messy, honestly,” she says. “So I really wanted ‘Poster Girl’ to feel like a project. Even though most people listen to it on playlists or not a lot of people are buying physical albums – I really appreciate you if you do, though!” she adds as a quick aside, “but it’s not really the truth. We’re in the age of streaming, but I still wanted the album to feel like it made sense together.”

The result is that ‘Poster Girl’ is a messy, honest representation of what it’s like to fall in and out of love, wrapped in a shimmery, feel-good pop blanket. “I think all of my songs are about love, essentially, in one way or another,” Zara says. “I really think the album has a positive sound to it, even though not all the songs are inherently positive.” She cites new tracks like ‘Ruin My Life’, ‘Right Here’ and ‘I Need Love’, songs which lay bare the desperation of rushing love that makes you do stupid things, and which isn’t the most attractive or empowering part of love. “They’re a little desperate and sad,” she admits. “But every song has a drive to it and takes you to a place where you don’t feel sad listening to it. If anything, it’s crying on the dancefloor, which is one of my favourite genres. They’re very unapologetic songs, I just say how I feel. They’re not necessarily empowering per se, but at the same time, this is how I feel and I’m not making excuses for it. That in itself could be empowering.”

Empowerment is a strong theme of Zara Larsson’s identity as an artist. On International Women’s Day, she’s performing a free online concert in association with fellow Swedish legends Ikea. “When Ikea asked me to do it, at first I was like, hold on, am I going to be in the warehouse?” she laughs. Ikea approached Zara because they wanted to shine light on the gender imbalance that remains when it comes to housework. Zara herself has been very outspoken online on issues of sexual harassment at gigs and educating her fans on feminism. “I have always been a very opinionated lady and I want to let people know what I think.” She says, “You know when a microphone feed accidentally goes into the speaker and then it goes back into the mic and it gets really loud? I feel like that’s me in a way because I react to stuff and share my opinions on things, then people react to that and I react back. It’s like a snowball effect, in a way. But it gets people involved and engaged.”

Speaking to Zara, she open and honest about everything. Among the trappings of pop stardom, it’s easy to forget that she’s also just a twenty-three-year-old still figuring herself out. First hitting the LA writing circuit at age 16, she found herself to be a young woman in a ridiculously male-dominated world. Thankfully, she had her mum in tow, but even so, she’s been in a few uncomfortable situations.

“Most people, even if they’re predators and sexist, they wouldn’t go after a sixteen-year-old. Except if you’re R Kelly,” Zara says. “But even so, I still ended up in a weird situation sometimes where it was me and like seven other guys. I was the only girl and the only person under thirty in a room and they were just like talking about their dick sizes. Or saying stuff like, “I don’t think Beyoncé’s very good, I think she’s Jay-Z’s accessory.

“When I go into a session now, I always want there to be at least one other girl in the room,” she continues. “When I turned eighteen, I definitely felt a shift. It felt like “Oh, you guys have been waiting for this day” because what the fuck! People were just talking to me different, they were looking at me different. They were like “Damn you’re grown now, you’re so sexy. I was lucky I always had my mum with me.”

Zara notes, that since the Me Too movement, things feel different. “It forced everyone to wake up and talk about it. A lot of people got fired.”

With music being her life since such a young age, lately Zara’s been considering going back to school, but she’s not yet sure what to study. “It’s so fucking frustrating because I want to be everything. I want to do everything in life and sometimes that stresses me out, the fact that I can’t be a pilot, teacher, doctor, lawyer, work with the ocean, be a director, go to film school, learn lighting design – I mean it never ends. It really doesn’t. It stresses me out that the opportunities are endless.”

In spite of the scary possibilities of her own limitlessness, Zara has faith in her vision that reaches beyond topping the charts. “A pop star is what I wanna be and that has always been my centre: so I can go onstage and perform. That’s where I feel the best and most natural.” This faith in her performance has carried her through the nerves of the second album cycle, and she holds herself with the air of someone who has journeyed through insecurities to arrive at a serene place of wisdom. “The more you care about yourself as an artist, the less you care about the charts,” she says. “It’s always fun to be appreciated by a lot of people, but I’ve come to the conclusion that if that’s the only thing you chase, then you will always be chasing.”