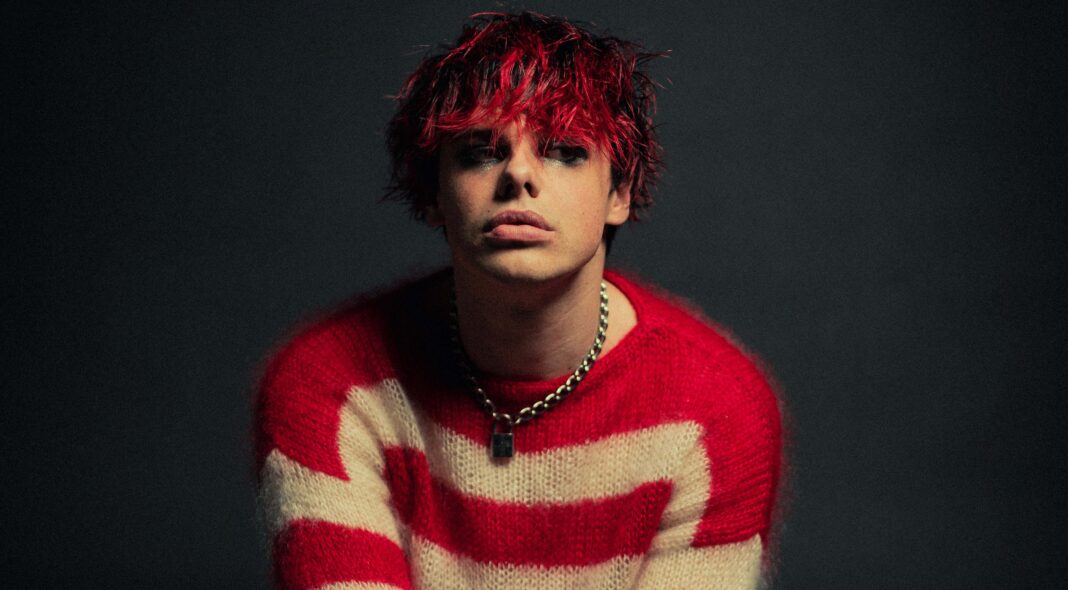 With his Rocky Horror androgyny, expressive face and streaky hair, Yungblud often resembles the love-child of Gerard Way and Caitlin Moran. Live, he leaves it all on stage just like Jagger, Freddie, or Madonna, and when describing his hometown of Doncaster as “the Detroit of the UK,” Yungblud joins fellow Yorkshire musician Richard Hawley in the English heartland rock club: “It’s rainy and baggy and run down and a bit trodden in the mud. But there’s a real solidarity and sense of community there.”

Given these diverse references, it’s entirely fitting that the cover of his second album, ‘weird!’, presents Yungblud as seven different flamboyant characters. Dominic Harrison, the artist behind the alter-ego(s), shot to the mainstream with his 2017 single ‘King Charles’ and 2018 debut emo-rap album ‘21st Century Liability’. He’s since teamed up with Machine Gun Kelly and Bring Me The Horizon among others, dated Halsey, toured extensively at bigger and bigger venues, and amassed a loyal following. He calls his fan-base his “family”, a community of switched-on teens informed about the world and their own emotions. He’s been known to take to the streets in protest, most recently at George Floyd protests in America, and his shows are littered with “Fuck Boris” chants. Yungblud wants to be your working-class hero – just in fishnet tights.

On ‘weird!’, then, it’s business as usual: Yungblud takes on political and personal demons, from soulless corporations to sexual assaulters, transphobes, and lads. While the record’s title track and lead single ‘weird!’ is catchy in a plasticky LCD Soundsystem-meets-The-1975 sort of way, most of the songs range from the anodyne (‘love song’) to the unlistenable (‘superdeadfriends’ – a migraine in music form), and borrow liberally and blatantly from other acts. Twelve seconds into ‘charity’, an Oasis brawl gives way to a dead ringer for Blur’s ‘Parklife’, while elsewhere there are frequent whiffs of Jamie T, Arctic Monkeys, My Chemical Romance, and even Tame Impala. Formula and imitation are the gods of ‘weird!’, and for such a hyperactive artist, the songs ironically come across as a bit lazy.

But beneath its brash pop façade, ‘weird!’ contains genuine, if earnest, sentiment. “Do you feel like you’re irrelevant?” asks Yungblud on ‘mars’, rallying listeners like a political pamphlet. The track relates the experience of a transgender girl Yungblud met at a show, who won her parents’ acceptance by introducing them to his music and community. “Her mum and dad, they couldn’t understand / Why she couldn’t turn it off, become a better man,” he sings with empathy and lyrical candour.

Understated songs such as ‘it’s quiet in beverly hills’ express this honest social awareness more keenly too – there’s just not enough of them. Yungblud’s 2019 EP ‘the underrated youth’ ended on a promising note with the melancholy of ‘waiting on the weekend’. Stripped of loud paraphernalia, the restrained, emotionally mature track is a better musical match for some of the issues Yungblud’s so eager to address on ‘weird!’.

Still, his extroverted emo-pop energy fuels his reputation as a live performer and keeps his audience’s emotions charged, and therein lies Yungblud’s charm. But there’s almost something of the cheesy TV presenter about him – whiffs of a pre-music Disney Channel stint, perhaps – which isn’t helped by the formulaic songs here. Catchy, competent, and energetic, ‘weird!’ will probably succeed with Yungblud’s established listeners and secure broader appeal too – but listen too long and your eyeballs start to feel like they’re four feet in front of your face. These songs don’t do justice to their socially and politically astute creator: no amount of fishnet tights and political chants can excuse unoriginal art.