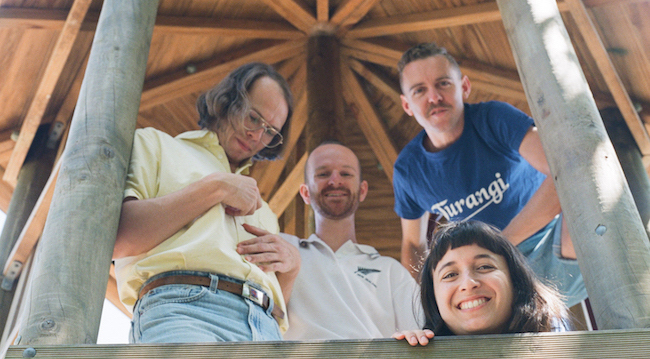 The Killers – ‘My Own Soul’s Warning’

Don’t let the eerie synth opener fool you, as the latest single from soon to be released ‘Imploding the Mirage,’ is as satisfyingly anthemic as they come. After a gentle intro featuring ethereal vocals from Flowers, the keys and guitar erupt into a whirlwind of power we’ve come to expect from the Las Vegas lads. Co-produced by Foxygen’s Jonathan Rado and Shawn Everet, its euphoric lyrics boil down to the idea of trusting your own instincts. And in a month that would have seen the band headline packed stadiums across the UK, it’s hard not to imagine this album opener sliding as easily into their set as Flowers slips into his pink sequinned jacket. In fact, close your eyes and you can almost hear kicker, ‘I just wanted to get back to where you are,’ being belted out by a bevved up crowd.

Back to quench your indie pop thirst, the New Zealand four-piece provide the perfect cocktail of honeyed vocals and effortless riffs on this satisfying single.

Softer than the roaring guitars on 2018 debut ‘Future Me Hates Me,’ but all the more melodic, the single is the third helping from upcoming album ‘Jump Rope Gazers’. But while the sounds may be simpler, don’t expect the lyrics to be any more upbeat. As melancholy as their debut, Elizabeth Stoke’s prose is as self-deprecating as ever. Still, while she may declare that she’s ‘kind of a bummer,’ at least we’re safe in the knowledge this track most definitely is not.

Smooth electronics and mellow guitars set the backdrop for the calming words on BB’s first output of the year. It’s a poignant tune that perfectly captures the mood of the moment and offers a tonic for those of us feeling more than a bit overwhelmed. Because yeah, everything’s a bit shit right now, but like a massive hug from your mum when you’re feeling crap, the 21-year-old reminds us that this too shall pass.

In a world where miscarriage is too infrequently discussed, let alone sung about, Dream Wife’s emotional exploration of the sorrow that comes with losing a baby is deeply refreshing. The latest contribution from upcoming album ‘So When You Gonna…’,  the London based trio has explained it was written for “a friend who went through multiple miscarriages and is now pregnant again.” An ode to the strength it takes to find hope after sustained heartbreak, this ballad of loss and desire is the band’s gentlest track yet. It’s a step away from the thunderous riffs that dominated their 2018 debut, but the emotion is all the more affecting for it.

It’s been a year since she last graced us with new music, but Noname is back with a powerful minute of verse that references the deaths of George Floyd and Black Lives Matter activist Oluwatoyin Salau. Produced by Madlib, the track also appears to respond to J.Cole’s new song ‘Snow On The Bluff,’ which is widely speculated to have criticised the Chicago rapper. But all Noname needs is a little over 60 seconds of cadence to reassert the narrative and reprimand J. Cole for picking a fight right now with all that is going on in the world. She raps, “Wow look at him go/ He really ’bout to write about me while the world is in smokes? / When his people in trees, when George was begging for his mother saying he couldn’t breathe / you thought to write about me?” Later she adds, “Little did I know all my reading would be a bother/ It’s trans women being murdered and this is all he can offer?”