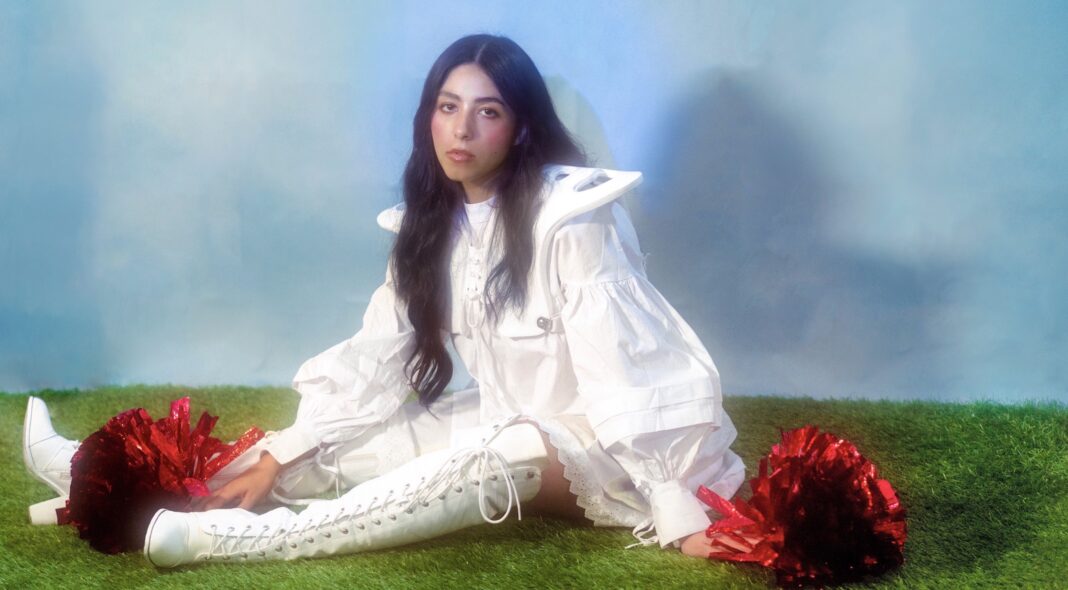 Near-chaos, violence covered in sugar and candy. That’s how Bruce Springsteen once described Wall of Sound records, and on ‘Death Of A Cheerleader’, Pom Pom Squad pursue that description to its extreme. “It hits me and it feels like a kiss,” sings frontwoman Mia Berrin. Actually, these songs feel more like a thwack, delivered in loud, lingering motion.

Pom Pom Squad – Berrin’s solo project turned four-piece Brooklyn band – have sabotaged classic American imagery since the day she claimed the @pompomsquad handle on Instagram back in 2015. The band strike a formidable presence on stage, and across two EPs Berrin subverts the cheerleader image while retaining – or reclaiming – the sport’s strong femme female identity. “I wanted to place myself somewhere in the narrative so that it felt like there was room for me”, she told The Forty-Five last month. “Rather than kind of living a life where I just felt like I didn’t exist.”

Riot grrl initially set Berrin’s heart ablaze, but it was too white for a queer, mixed-race teenager searching for representation. “I meet a lot of girls of colour who love punk music, but when they’re looking at the stage, they’re not looking at themselves,” she said in an early interview.

With ‘Death Of A Cheerleader’, Pom Pom Squad do Sister Rosetta – black queer female godmother of rock-and-roll – proud. Berrin enlists her bandmates to flesh out with furious guitar fourteen songs she finessed during quarantine, on a record that comes to terms with her sexuality.

The album doesn’t just sink into muddy angst, however. Berrin adds camp, cinematic elements – syrupy strings, fifties and sixties Wall of Sound nods – that cut through the band’s characteristic punk fuzz and lift the record to a more ambitious pop plane, with a cheerleader’s polish.

But with the opening tinkle of the Chordettes’ ‘Mr Sandman’, Pom Pom Squad set out to capitalise on a pop sensibility so extremely sweet it becomes creepy, and transgressive. From a menace-laced cover of Tommy James & The Shondelles’ ‘Crimson + Clover’ to the chewing-gum gauze of slow-dance number ‘Crying’, the heaviness of teen emotion is made physical, and a little bit frightening. ‘Forever’ follows Lana Del Rey’s burnin’-for-you disposition to its fieriest end, then curls into that infamous ‘Be My Baby’ drum beat.

She’s 23 now, but Berrin’s writing acutely pinpoints teenage experience. Lead single ‘Lux’ actually came to life during her time at a high school she says had “extremely John Hughes movie realness”, but all of the songs retain that proximity to adolescence. If she’s not “in a crowded high school dance / in a cloud of peach alcohol” on ‘Lux’, she’s “at home with the radio on and I throw myself down on the bed” on ‘Second That’, a song that ought to earn Berrin membership to boygenius, guitars creaking back-and-forth like rusted swings.

“My worst decisions are the ones I like the best,” she sings on ‘Head Cheerleader’, “Took mе under the bleachers like we were seventeen / My feelings always make a fucking fool of me.” These songs offer a hand to everybody – aren’t we all perennially seventeen with embarrassing feelings? – but most importantly they offer a hand to queer girls of colour like the teenage Berrin, unrepresented and misunderstood.

They offer power, too. The album courses with energy like an adolescent body, threatening to break through the surface of the music at any second: giddy rushes of noise (‘Red With Love’), all-out punk (‘Shame Reactions’), lovechildren of Lorde and Hole (‘Cake’).

Mr Sandman returns to finish the job at the end of the album on ‘Be Good’, the familiar notes crashing around your ears, before you exit the funhouse via distorted horror-movie synths. With sugar-coated violence, Pom Pom Squad murder the final traces of the idealised and sanitized image of their cheerleading protagonist. And ‘Death Of A Cheerleader’, with its camp horror and doo-wop wooze drenched in guitar, offers an aesthetic that’s so much more fun to root for.