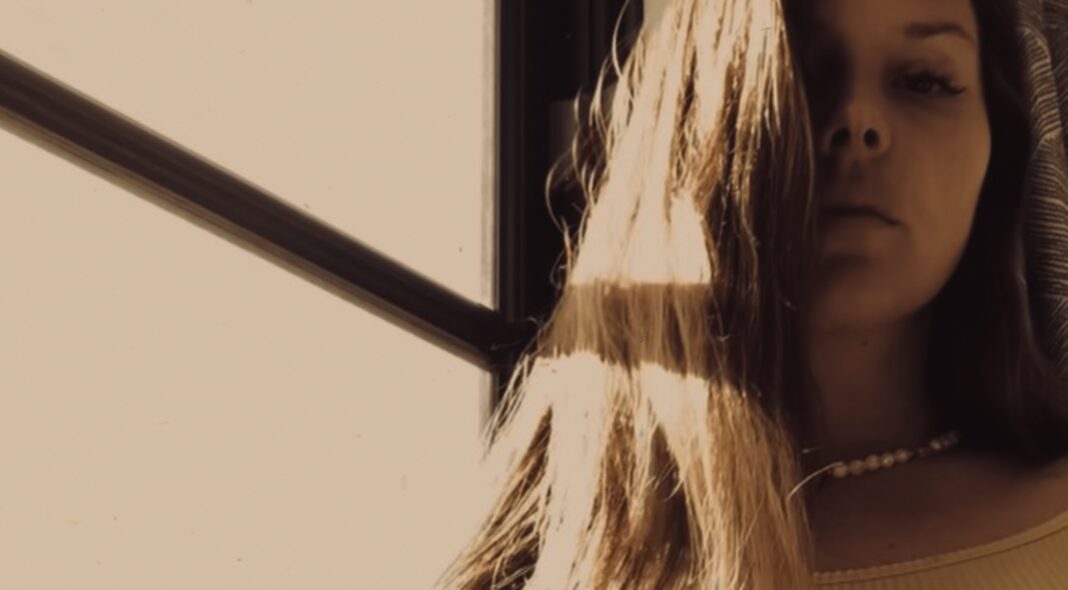 Of late, and to mixed effect, Lana Del Rey has administered several doses of reality into her mythic shtick. Her real-life girlfriends adorn the cover of her previous album, March’s ‘Chemtrails Over The Country Club’, while her now-deleted Instagram account offered grainy photo dumps of daily life, alongside notably gauche outbursts that made fans groan and reach for the Frank O’Hara line “oh Lana we love you get up”.

A brilliant chronicler of American culture in his own medium, poetry, O’Hara’s defence of camp glamour and tabloidy celebrity culture features heavily in much of Lana’s work too: a body of music that’s rightly established her as a great American songwriter. But ‘Blue Banisters’, her eighth album, arrives to relatively little fanfare: a few false starts, a quiet press cycle, social media silence. On the cover, she sits barefoot on a wooden veranda between her two dogs, Tex and Mex. The scene looks homely. The songs inside are sometimes homely, too: defiantly first-person, present-day accounts. There’s a photograph on the wall of Lana on a John Deere tractor. Her sister Chucky’s “makin’ birthday cake / chickens runnin’, bare feet, there’s a baby on the way”. Her mother is tricky. Her father and Chucky appear as co-writers on final song ‘Sweet Carolina’.

A pandemic rages — “It’s LA, “Hey” on Zoom, Target parking lot / And if this is the end, I want a boyfriend / Someone to eat ice cream with and watch television” — and like all of us, she yearns for normality: “The girls are runnin’ ’round in summer dresses / With their masks off and it makes me so happy”. Contemporary references to lockdown, Mr Brightside, Black Lives Matter, and the Santa Clarita fires (not to mention the typically funny “You name your babe Lilac Heaven / After your iPhone 11 / ‘Crypto forever’ screams your stupid boyfriend / Fuck you, Kevin” on ‘Sweet Carolina’) don’t jar: they anchor her usual wash of nostalgia firmly in the now.

Yet the world she spins — even a pandemic world where she appears “kinda regular” — remains alluring and vaguely unreal. Any references to ordinary life are outweighed by the romanticised American imagery that’s always furnished her songs. Even the lockdown-centric ‘Black Bathing Suit’ is still textbook Lana: boredom, bad girls, clothes imbued with deeper meaning, and her own enigma weaving a sticky web from the centre of the song. “I guess I’m complicated, my life’s sorta, too,” she drawls. “I wish you could see to my soul through this black bathing suit / You don’t know me any better than they do, baby.” Through city names and hallowed tropes she continues to fetishise an America rotten at its core, the decay and the beauty, the artificial and the meaningful: “I can’t sleep at home tonight, send me a Hilton Hotel / Or a cross on the hill, I’m a lost little girl”.

Jack Antonoff’s not around as producer this time, yet the restrained sound he kindled on 2019’s superb ‘Norman Fucking Rockwell!’ and this year’s ‘Chemtrails Over The Country Club’ prevails, though it’s less cohesive: lilting, brushed percussion, light piano, cinematic sweeps, occasional mariachi horns. Those who miss Lana’s poppier self might be disappointed, and indeed ‘Blue Banisters’ hits a few lulls. But her vocals and words command the limelight. “I sing like an angel, my heart’s like one, too,” she asserts, not far removed from the slight swagger of Bob Dylan and his 2020 assertion, “my heart’s like a river, a river that sings”.

And Lana does sing like an angel on ‘Blue Banisters’. Her vocals shore up treacly ballad ‘Arcadia’, and cast spells during ‘Wildflower Wildfire: “hot fire, hot weather, hot coffee,” she incants breathily. Neil Tennant once described Billie Holiday’s voice as being “like smoke — you can’t pin it down,” and Lana’s voice feels similarly elusive — but less the smoke of a Harlem jazz bar, more the smoke of a suburban BBQ. Her falsetto flits among the tracks, against the occasional sizzle of her lower register and traces of the wet hiss of “down at the Men in Music Business conference” from ‘Chemtrails’, her voice like the hem of a dress soaked in dew.

‘Black Bathing Suit’ culminates in a layered chorus of these vocal styles, all her selves riding in the same song — the same album, really. For despite its present-day stance, there’s a retrospective element to ‘Blue Banisters’. Fragments of earlier, unreleased songs build up much of the tracklist. The woozy ‘Dealer’ was originally intended for ‘Chemtrails’. A few tracks date as far back as the sessions for 2014’s ‘Ultraviolence’, and songs like ‘Living Legend’, ‘Cherry Blossom’, ‘Thunder’, and ‘Nectar of the Gods’ have circulated unofficially in various guises for years. But Lana’s past work haunts all of the songs. ‘Wildflower Wildfire’ belongs sonically to 2019’s ‘Norman Fucking Rockwell!’, ‘Beautiful’ defends the sad girl label often affixed to her, ‘If You Lie Down With Me’ supplies her favoured style of fireworks romance, while ‘Living Legend’ references Sin-é, the fabled East Village venue where a young Lizzy Grant performed in 2006.

Even the three singles released back in May — ‘Text Book’, ‘Blue Banisters’, and ‘Wildflower Wildfire’ — already seem like part of her past. Back then, the new album was going to be called ‘Rock Candy Sweet’, its cover a 2020 selfie blighted with a sepia filter, crude white frame, and curly blue font — all the grace of a Picsart edit, homely in a bad way. The cover may be slicker now, but ‘Blue Banisters’ still thrums with a sense of Lana’s own history, like a personal photo album – and certainly a better kind of archive than any Instagram account.