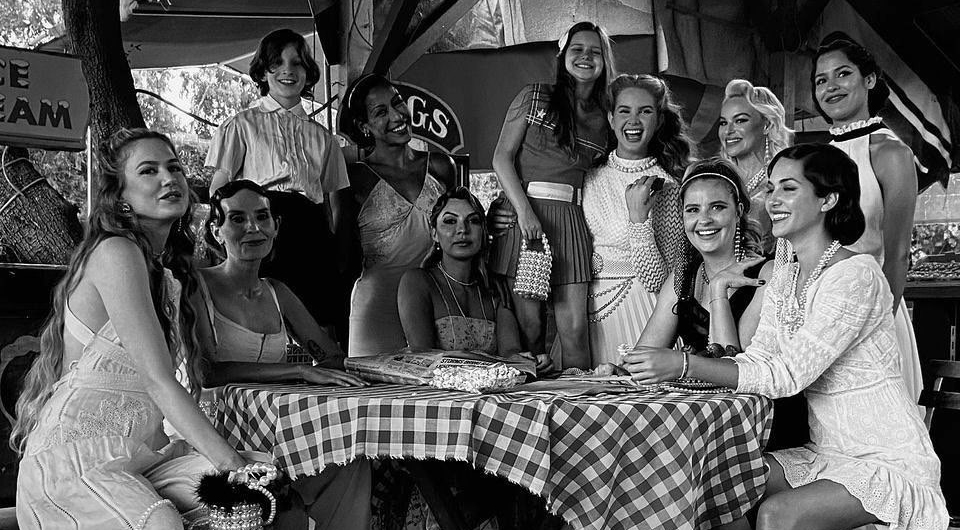 2021 is still in its infancy and yet, it already feels like every glimmer of hope comes with one huge caveat. In the music world, it was the collective excitement over the announcement of a new Lana Del Rey record that barely had time to settle, before the inevitable and collective exasperation induced by a Lana Del Rey Instagram caption arrived to spoil the party. On Monday, Lana shared the cover art for her seventh album ‘Chemtrails Over the Country Club’ and before many had even spotted the notification, she’d already dug somewhat of a preemptive hole for herself.

While the artwork, which featured Lana and her ‘longest-term’ friends laughing around a table, did attract minor criticism because the lighting had managed to literally whitewash the diversity at the table, the immediacy of her defence was likely a symptom of something else. Lana – who got into hot water last year over some deeply questionable remarks – was already ready to go, anticipating a controversy that had yet to exist and where better to defend your own honour than the Instagram comments section? “My boyfriends have been rappers” is the kind of wince-inducing line that feels a touch too trite, even in parody (would Lana have voted for Obama for a third term if she could?), and she continued to exhibit an elementary school understanding of racial politics as she name-dropped her “diverse” friends like witnesses for the defence. Well-intentioned? Arguable. But the execution? Not really up for debate. And all this before the lead single had even been released.

For that, Lana headed to the airwaves for a chat with Annie Mac on Radio 1. Everything about this live interview, which she conducted whilst eating a popsicle for breakfast, had the air of curated whimsy: from the revelation that she recently broke her elbow rollerblading through to the impromptu arrival of her chimney repair guy. It made for an entertaining listen until the whimsy became decidedly less cute and Lana began to pontificate (and chaotically veer away from Annie’s questions in the process).

“I’ve got a lot of issues and inclusivity just ain’t one of them,” Lana proclaimed. She soon took on the Trump presidency: “As bad as it was, it really needed to happen”; implied that you’re above criticism just as long as you’re not actively staging a coup: “we voted for Biden. We’re not the ones storming the Capitol” and best of all, stated that “our world’s greatest problem is not climate change or capitalism but sociopathy and narcissism.” Hearing someone claim that narcissism is the root cause of society’s ills when that same person wrote “I’m literally changing the world by putting my life and thoughts and love out there on the table 24 seven. Respect it” less than 24 hours prior is quite the hoot. But is it a surprise? Not especially.

While out of context pull-quotes have the tendency to paint an unfair picture, I don’t think you could reasonably argue that here. Lana’s not completely wrong: she hasn’t loudly endorsed the fascist-in-chief unlike a number of high-profile artists in the music industry and despite baseless speculation to the contrary, it’s clear she didn’t vote for him either. But this cannot be the bar for any and all criticism. It’s especially jarring to see this attitude in 2021, to see how indicative it is of a white fragility we are all trying to retire. The past 12 months have presented the long-overdue need for everyone to interrogate their unconscious biases and privilege, to listen to the perspectives of those who have long been silenced rather than resorting to rash defensiveness and dismissiveness. Anti-racism is a collective responsibility and requires an ego check at the door. Lana’s attitude feels distinctly behind the times and for once, it’s not due to deliberate nostalgia.

Or is it? It’s become customary to debate whether each move a celebrity makes is a bluff, a double bluff or – heaven forbid – completely earnest. “It has to be intentional,” we wonder, out of sheer disbelief. “She’s playing five, six, seven dimensional chess with us all!” Lana Del Rey’s persona, like Lorraine Kelly’s before her, is just that: a persona. She has always actively courted controversy because it suits her imagined vibe: a wild, yet sheltered, daughter of 1960s New England Senator. But it only takes Jennifer Aniston hanging a ‘My First Pandemic’ Christmas tree ornament and Kim Kardashian’s escape to normality on a private island, to remember the inherent distance and obliviousness that seemingly defines the rich and famous. Lana’s latest comments are so astonishingly tone-deaf that it’s hard to believe she’s not being intentionally antagonistic. Even harder to believe that nobody close to her would have advised her otherwise, after her series of racially insensitive posts in the summer. There will be plenty of other artists with the same attitude but not quite the same foot-in-mouth problem. When should we be cynical and recognise the trend of celebrities creating their own media storm purely for publicity and when are we giving someone entirely too much credit? Sometimes, the simplest explanation is the best.

How then, in spite of all this, does the song ‘Chemtrails Over the Country Club’ seem like a knowing comment on comfortable, middle-class whiteness; the work of a self-aware songwriter? The lyrics play host to the ever-present ghost of Gatsby’s Daisy Buchanan and her desire to be a beautiful fool, to “laugh about nothing as the summer gets cool”. Wilful ignorance is the dish of the day: she doesn’t care what they think and whatever criticisms you can level at her are counteracted by a simple: “I’m just wild.“

The accompanying video is nothing you wouldn’t expect from Lana: shot in Academy ratio, speckled film roll from the 60s and the only indication of the modern day coming in the form of her now infamous mesh face mask (more points in the ‘troll’ column). That is, until a nighttime twist reveals this glamorous lifestyle’s darker underbelly. But it’s Lana’s deliberate nod to conspiracy theories that’s the most telling: it’s comforting to pretend you’re a kid in the swimming pool again; chemtrails are just planes flying overhead; the waves of disinformation sweeping the world will leave a mark, but only a temporary one. And none of it can touch you in the country club. There’s still so much of that kid, safe inside her white picket naivety, visible in Lana’s public persona. But it’s caught between adolescence and childhood, between understanding and obliviousness.

How much do these faux pas matter? It matters that celebrities, who are afforded a great deal of luxury and privilege in our ever-disparate society, also recognise the weight of their own words. That if – as Lana so shrewdly puts it – narcissism is going to “kill the world”, they should experience some degree of accountability, even if their work is the musical equivalent of the second coming of Jesus. Lana’s 2019 release ‘Norman Fucking Rockwell!’ was her most critically-acclaimed yet: for all intents and purposes, it became a masterpiece the second she sang, “Goddamn, man child. You fucked me so good that I almost said, ‘I love you’”. It’s quite likely, if the title track is anything to go by, that ‘Chemtrails’ will be something special too. But when does our idolatry of someone’s work inadvertently give them a free pass? If she is – as some branded her two years ago – the next greatest American songwriter, why does her communicative prowess never quite translate to Instagram? But, as I genuinely contemplate tweeting “ever feel like your personality is a FIFA game you just forgot to quit?”, maybe social media literacy is something we all need to work on.