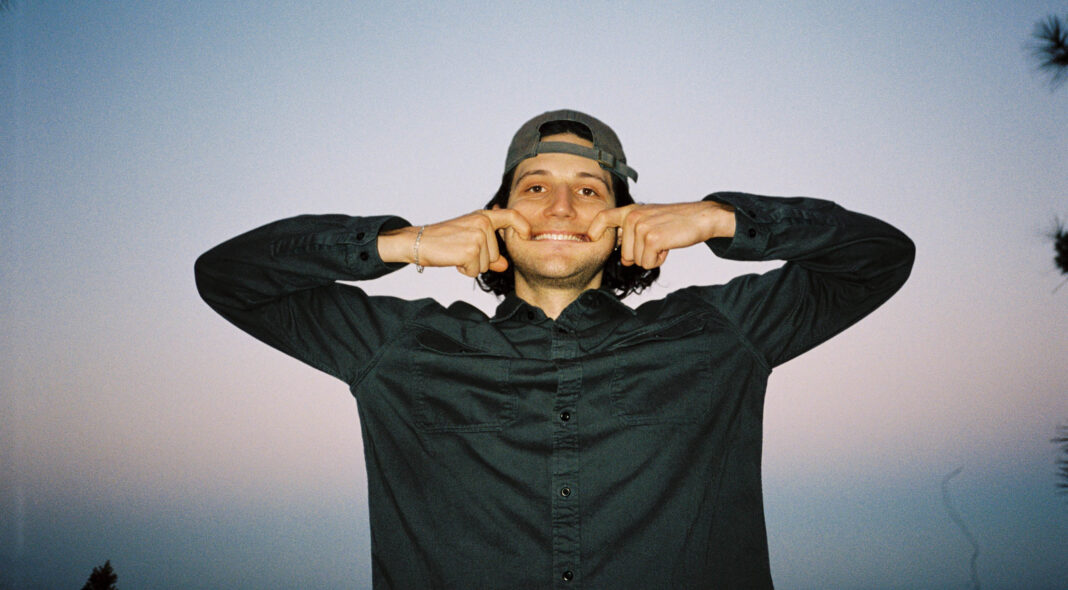 Jim-E Stack is staging an intervention against winter. At least, it sounds that way on his second album ‘EPHEMERA’, which carries all the honeyed cliché of summer: blue skies, ice-cream, denim shorts, “sweet summer sweat”. Listening to the record is like riding a bicycle through Miami, or Milan, or Marseilles. ‘EPHEMERA’ contains enough catchy emotive hooks to define the summer months ahead – and yet here we are in nearly November. But it may as well be summer: all things considered, this year everybody in the northern hemisphere should allow sunshine to save us where it can.

And maybe it can on a pop record by Jim-E Stack. The Californian producer released his debut solo album ‘Tell Me I Belong’ back in 2014 – a slightly redundant title, given his list of musical collaborators now runs like a who’s-who of distinct pop. This year he’s worked on the new releases from Bon Iver, Charli XCX, Haim, and Dominic Fike. His phonebook also features Caroline Polachek, Perfume Genius, and Rostam. And invited to the ‘EPHEMERA’ party are Dijon, Octavian, Ant Clemons, Kacy Hill, Empress Of, Bon Iver, and BROCKHAMPTON’s Bearface. Jim-E Stack, you definitely belong.

Student jazz band member, garage rocker, underage DJ, producer, songwriter: Stack’s worn all the hats, but above all, he remains a collaborator. Over the eight tracks on ‘EPHEMERA’ he weaves disparate pop artists into his own narrative sound, though the album is rooted in the music he’s made with those artists – “the magic in the leftovers”. Sitting alone at a computer produces work that’s precise and well-oiled, but the upbeat balmy energy of ‘EPHEMERA’ owes much to team efforts that generate spontaneous, fun songs. Only on ‘BE LONG 2’ does Stack fly totally solo, and perhaps for that reason it’s the least interesting track, grout between shiny tiles.

‘BE LONG 2’ hides in the middle of a record that begins and ends with its strongest songs. Opener ‘Note To Self’, featuring the excellent Empress Of, is the best track, not surprising given their long-time partnership (‘When I’m With Him’ wouldn’t exist without Stack). Barely two minutes long, ‘Note To Self’s brevity actually works in its favour, short enough to justify hitting repeat at least four times. Empress Of’s brief, repetitive lines – “Just let it knock you down / Don’t fight it, let it bring you back around” – are similarly effective, little mantras that burrow inside your brain. It’s a lyrical style common to the entire record. On ‘Jeanie’ – a perfect name for a holiday romance protagonist – Bon Iver implores in familiar dulcet auto-tune, “Don’t want you to feel too much,” a desire seemingly shared by the album itself. Like holiday romances, these repeated lyrical phrases can just as easily mean everything as they can mean nothing.

It might be tempting to compare Stack’s solo output to something churned out by an algorithm, but that discounts his undeniably sturdy credentials. His production work is evidence galore of his talent and depth: he’s saved the levity for ‘EPHEMERA’. They’re songs you might catch playing over shop speakers in a European city as you buy sun-cream, and it’s unclear what binds them together other than being eight decent singles. But if Jim-E Stack’s solo beat is to make Spotify-playlist-pop-better, he’s succeeded. It’s a summer fling of a record, sweet heat and then it’s gone. The title of Jim-E Stack’s first album ‘Tell Me I Belong’ proved to be inaccurate, but ‘EPHEMERA’ is bang-on.